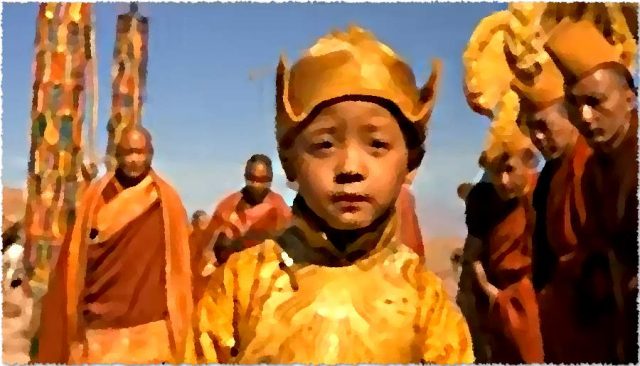 Wondering whether any works of art profit from the richer aspects of Buddhist philosophy, I mostly found mediocre films such as Bernardo Bertolucci’s Little Buddha, which miscasts a wooden Keanu Reeves as Siddhartha Gautama, or biographies on well-known monks, that, although interesting to someone already familiar with their lives, are not any more compelling. One of the few exceptions to this is Martin Scorsese’s Kundun, which owes its success not only to excellent cinematography (Roger Deakins) and scoring (Philip Glass) but especially to Scorsese’s ability to exploit core Buddhist concepts to striking poetic effect.

The film follows the fourteenth Dalai Lama’s childhood and his subsequent struggles with the Chinese invasion of Tibet. From the opening shot, there is a dynamism to the film’s editing (Thelma Schoonmaker) and cinematography characteristic of Martin Scorsese’s best films. The film begins with an image of the Himalayas, which transitions into a reverse video of a mandala as it is blown away, making it seem like the wind itself was creating the sandpainting. There is an elegance to this opening that makes it clear, from the start, that Kundun is a work of art first and an act of devotion second. […]