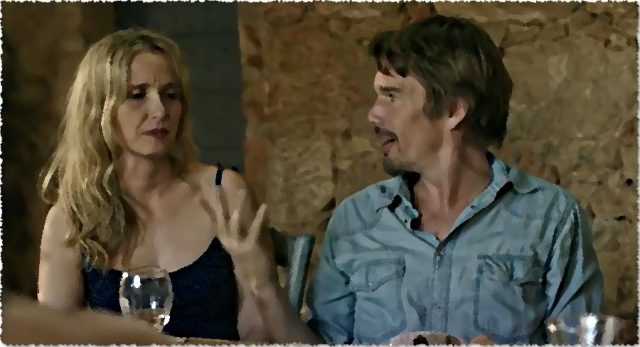 At the end of Before Sunset (2004), Jesse (Ethan Hawke) walks Celine (Julie Delpy) up to her apartment moments before he is set to catch a plane for America. As with the first film, Before Sunrise (1995), there is a pressing urgency to get to know and to say as much as possible within a short span of time. In fact, by the end of the second film, the characters have only now spent a total of two days together, yet their connection is undeniable. Before Midnight (2013), however, doesn’t carry this time-sensitive urgency as we come to learn that the couple is now married with twins.

Alright, this must be a happy ending (or beginning) then. Jesse is a published writer who also works as a professor. Celine is involved in activism and has recently been offered her ‘dream job’. They live in Paris. The couple, while vacationing in Greece, sees Jesse’s son Hank off at the airport, and this gets Jesse wondering if he has been present enough within his son’s life. Everything seems like a fairy tale. While in Greece, they visit a writer’s home and are offered copious amounts of food and drink. It is a seaside villa along the Mediterranean, and how many would be offered such an opportunity, much less how many writers live well off enough to afford such? It’s not that the couple is excessively extravagant, just that their situation, while real, is perhaps the most unrelatable. […]