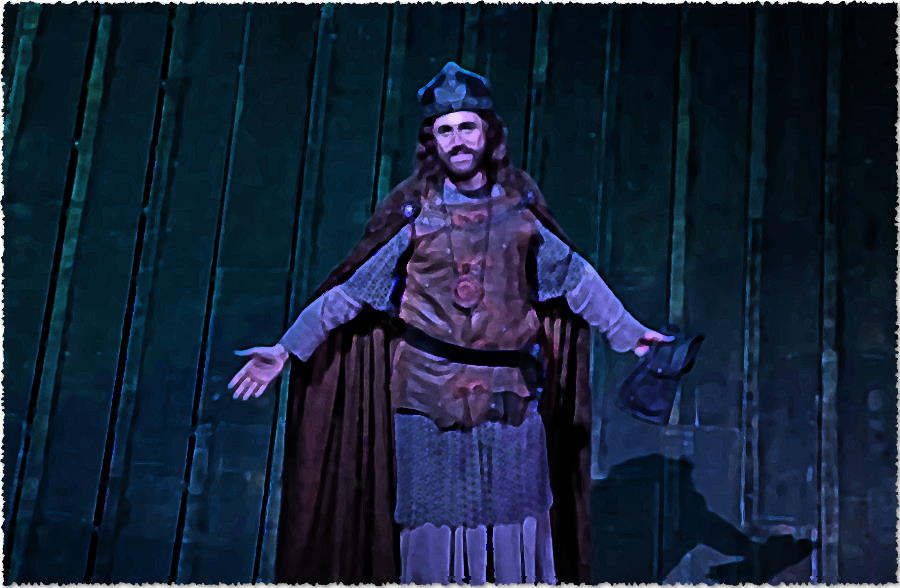 “Good friend, for Jesus’s sake forebeare/ To digg the dust enclosed heare/ Bleste be the man that spares these stones/ And curst be he that moves my bones.” The writing on Shakespeare’s grave makes us wonder, was the mysterious bard superstitious? In his play, Macbeth, he gives us the three wicked sisters who prophesize the life of Macbeth. Magic shows up in other works by Shakespeare most notably in The Tempest, with a ghost and a skull in Hamlet. Shakespeare wasn’t Merwin, but he did dabble.

And we know Shakespeare was ambitious like his character in Macbeth. It’s one thing to be superstitious and another to be ambitious, but when we mix them all bets are off and the sky is the limit. Shakespeare definitely shot for the moon. No one talks with the words Shakespeare put in the mouths of his characters, at least not all the words in one sentence, line after line. The playwright was well beyond everyday reality as most of us know it.

He presented a different brand of reality. He presented the reality most of us have in our guts, and magic was this cloud that gave the audience space and made his work palatable.  Nobody could handle a Shakespeare play directly. Except that his characters do.

We have the aspiring king in the person of Macbeth prodded on by a scheming wannabe queen in a direct path to the top. But he just can’t seem to do it without the help of the witches. His road is tainted and unsurprisingly leads to destruction.

Society has witnessed this phenomenon before and will again. The popular term today is narcissism. It’s a potent situation where love of self translates into uncontrollable lust for power. All conscience flies out the window and woe to all who attempt to block it. Any and all cards are on the table or more accurately below the table. A human is not meant by God to be that way, and it makes for a very unnatural condition. We see it happening in politics as well as among the super wealthy. We know that he who lives by the sword dies by the sword, and many Americans are waiting for the billionaires’ comeuppance…

A difference between Macbeth and today’s narcissists is that today many of the bad people do it in the name of God and believe they are right whereas Macbeth knew he was bad. He based his path upon devilry and thought he was invincible. We know that according to the witches Macbeth will be killed by no man born of a woman. How could he possibly have foreseen that he would be done in by a Cesarean birth? Nothing but death could have ended the story of Macbeth. It was a story of the dark.

By all good judgment this is not the story of Shakespeare. No one hellbent on the dark could have written, for example, Romeo and Juliet. Shakespeare may have dabbled in the dark, but he wasn’t in lockstep with it. Contrarily he was a great light. He must have been familiar with the dark to pen a character like Macbeth, but he didn’t pitch a tent there. He lived in an era where the line between God and the Devil had not been so firmly drawn as it is now for so many people.

What can we say about our current crop of narcissists? I only wish Shakespeare were alive to take them on. We have people so tied into their money in a bad way, yet society seems to tolerate and accept it. I think Shakespeare would let loose with his pen and give them no relief. Shakespeare was well before the unfettered rights that we have today, when people still made judgments stick and enough was enough. I hesitate to infringe on anyone’s rights unless their rights infringe upon mine. Good arguments could be made that that’s exactly the situation with our billionaires.

But back to Macbeth. The play is handed to us as if to say, that’s just the way it was. Sometime in the 20th century we seemed to develop a handle on evil of sorts. People understand it now as mental illness. The only trouble is that no one seems to care if you call them crazy. People with significant mental health conditions are welcome anywhere. It’s a tough call. Many persons with mental illness are harmless. But what about the ones who want to run the country? They have buried their senses almost beyond redemption.

Yes, Shakespeare with as good of a mind as he had would have something to say. Current humankind has broken down the inhibitions and doubts people have over their minds. People are so cocksure these days. Would Shakespeare have copped a stance too if he lived today, or would he still have the same gravestone? Would he still be a little superstitious? Would he have some misgivings and some doubts?

Shakespeare had Macbeth as a man hopelessly driven. I’d be hard pressed to think Shakespeare thought of that as a good thing. Despite the thought that moral art is knee jerking, I think art can powerfully be a force for good. It’s like the recovering alcoholic who used to revel in how shitty they felt when drinking, who has reached a new approach and asks, why would I choose to feel shitty? Art can be cathartic. Maybe Shakespeare was warning us rather than solely telling a story. Just maybe there was an extra layer of a higher good. Lord knows he was trying to lift us somewhere.

I know that art for art’s sake is in vogue and people expect other people to accept it as such with no strings attached. Some of us have forgotten how to stand at the wall. It’s become common, no, desirable, to smash down the walls. But where does that leave us? Airheads? No, Shakespeare would not be on that train. As Bob Dylan said, he’d be in the alley talking to some French girl.

There’s nothing wrong with having ambitions for your life. You should. Shakespeare assuredly did. But if you’re security comes from the darkness, it can be a problem especially if you have no stops. Shakespeare may well have dabbled in the dark, but I think his intentions were good and he had a sense of judgment when a character like Macbeth didn’t. Shakespeare was not a moralist, but despite the elevated language was a realist about our feelings. He was saying, this is what happens when you go into darkness. A little superstition, an awareness of the dark is okay, but not obedience to the dark. Shakespeare with all his ambition and high language was really a force for balance. He was saying, “come with me for an hour or so, but don’t try to live the lives of my characters.”

If you enjoyed this analysis of William Shakespeare’s “Macbeth”, consider supporting us and get patron-only content on our Patreon page. This will help the growth of this site, the automachination YouTube channel, and the ArtiFact Podcast. Recent episodes include a survey of photography from Josef Sudek to Laura Makabresku, an examination of Abstract Expressionism as depicted in Kurt Vonnegut’s Bluebeard, and a discussion of Hermann Hesse’s classic novel, Steppenwolf.

More from Bruce Ario: “The Song of Hiawatha”: Simplistic Folklore?, Carl Sandburg – The Love of Chicago, Today’s Anthem: Dylan Thomas’s “Do Not Go Gentle Into That Good Night”