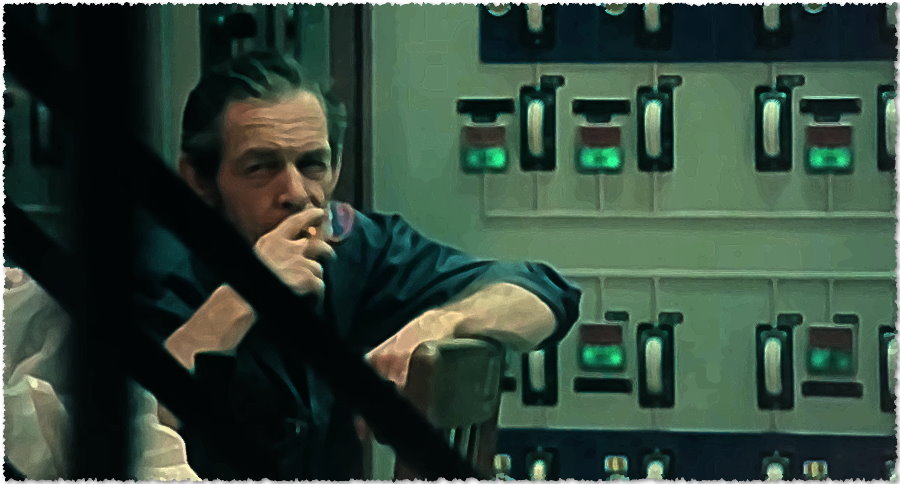 Godfrey Reggio’s Koyaanisqatsi: Life out of Balance is a film with no characters, dialogue, or traditional narrative. Like most works of ‘pure cinema’ it is a film of montages and camera-work – specifically, of time-lapse photography and ponderous tracking shots across enormous objects and places. Throughout the film Philip Glass’s fantastic compositions refract from the imagery like slivers of light from an oil slick, and it is only fair to give him equal credit in the final product, as it would be just a novelty without his elevations. When reduced to its basest form my view has always been that cinema’s core equation consists of screenplay, visuals and sound performing a precise and delicate exchange, with the result being media that tricks your brain into extreme states of being. It’s a precise illusion; if any aspect falls a little flat it can completely pop the balloon. Koyaanisqatsi despite dispensing with the screenplay still manages to sustain the façade, as in other works of the ‘pure cinema’ movement. We slowly transition from nature and humanity’s ancient past into the metropolitan and the industrial, culminating in absolute modernity, and the explosion of a rocket ship (in real terms the launch of the Saturn V rocket cleverly spliced with footage of an Atlas missile). The movie works despite its lack of clear narrative due to the themes we might assign upon viewing.

But I’m digressing, so let’s digress a little differently. Godfrey Reggio spent fourteen years of his life training to be a friar, a period in which he conducted prolonged fasting, vows of silence and intense prayer. He is a noted progressive and has done a lot of charity work with disadvantaged groups, which is clear in the moments humanity appears on screen. It’s admirable however that barring these shots, he doesn’t choose to spend too long on sanctimony. Philip Glass has worked with Reggio for the lion’s share of his career, and that is to Reggio’s benefit. His soundtracks never quite live up to the enormity of Koyaanisqatsi, but he nevertheless has a talent for synchronous tracks and montages.

Never before have hotdogs being fired from their production engine been so equivocal to the primal fury of a volcano. Koyaanisqatsi is a movie in line with my cinematic sensibilities and is completely out of balance (wahey!) when it comes to my personal belief systems. Before I begin to explain why I enjoy associative filmmaking (a term I just made up), I should clarify I’m not really into the trendy mystic notions Godfrey Reggio wraps the movie in, as it could have easily adopted the pretence of anything and still been as effective at what it does. I also think the conceit of fetishizing the Hopi people has been a complete academic circle-jerk for generations: a bastardisation into something that sounds interesting to undergraduates. I’m saying this because ‘Koyaanisqatsi’ is a Hopi word, and its definition is the subtitle. While discussing the film, people are often focused on the superficial environmental implications you can extract – like reviewing ice-cream by saying ‘it’s definitely cold’. While the message is old hat, the method of conveyance is the laudable quality.

In my eyes the subject is completely unimportant, as Koyaanisqatsi is a wonderful technical achievement. Shot in time-lapse photography for large sections of the film (including the renowned sequence ‘The Grid’), Godfrey Reggio’s innovations have faded in their technical significance somewhat – the old trap, in that what at the time was ground-breaking is now considered commonplace. We now see footage similar to the Qatsi trilogy in documentaries about koalas, alligators, and locusts. Despite this, Koyaanisqatsi never feels old hat for longer than a few moments. Each section is delicately constructed to communicate a sense of wonder, awe, and later dread. Philip Glass’s score is instrumental in that build-up of primal emotion. The act of watching and absorbing becomes a meditative state, which is where the associative component enters into the discussion.

I sometimes find it difficult to properly evaluate why I enjoy filmic media that defies literary convention. The enjoyment you can get from it is in many ways completely dissimilar to more traditionally plotted pieces of content. This is where the term associative filmmaking comes into it – Koyaanisqatsi is enjoyable because it is a stimulus that triggers thought around its chosen visual diaspora. This is the reason I think movies like it can bore, as the conventions of traditional cinema don’t prepare you for the requisite mindset. However, I also think that truly great pieces of art will instruct you in how to watch them. In the first five minutes Philip Glass’s eponymous composition evokes the feeling of meditation through repetition of the mantra ‘Koyaanisqatsi’. Similarly, Godfrey Reggio hands responsibility off to the viewer in a way that defies the pedagogic dynamic a traditional piece of content will enforce. First the viewer has to be open to it, and willing to be confused – even bored! This involves overcoming a certain reflexive insecurity. This provokes a desire to clarify what you’re seeing, and then a deductive process where you try to figure out why it’s being shown. This personally led me to speculate on the enormous scale of physical reality, the inbuilt mechanisms that made it possible, and finally mankind’s efforts to replicate that scale and ingenious design. The fun thing is in the different experience each viewer derives.

The admirable parts of Godfrey Reggio’s narrative are in the grandiose realisation of the subject matter. Koyaanisqatsi is a movie about magnitude – about enormous scale, zooming out to the degree human life and experience is like the flow of blood vessels through enormous arteries. It’s a quieting feeling, and the haunting organ compositions by Glass create a feeling of awe comparable to Kubrick’s 2001. When the movie begins to transition to urban spaces and large-scale industry, it comes with a feeling of anxiety. The time-lapse photography gives the impression of a huge and infinitely complex mechanism that’s being pushed to its operational zenith. At the detonation of the rocket, it feels like the chaotic result from the intense barometric pressure society is generating. This is the Life out of Balance. Considering the period in which it was made, Koyaanisqatsi feels incredibly prescient about the large-scale ecological holocaust we’re facing now, but ultimately that subject matter is just decorative. The kudos is in the realisation of it, a rollercoaster-like experience that takes you from one sensation to the next.

The film ends with three translations of the chanting we have heard in the final tracks:

If we dig precious things from the land, we will invite disaster.

Near the day of Purification, there will be cobwebs spun back and forth in the sky.

A container of ashes might one day be thrown from the sky, which could burn the land and boil the oceans.

Soon after Koyaanisqatsi’s release, the Challenger shuttle exploded after take-off. A container of ashes was thrown from the sky, and the lands burned, and the oceans boiled, and movies inexorably continued to be made about troubled detectives, and sexy ninjas, and they were all shot-reverse-shot as far as the eye could see.