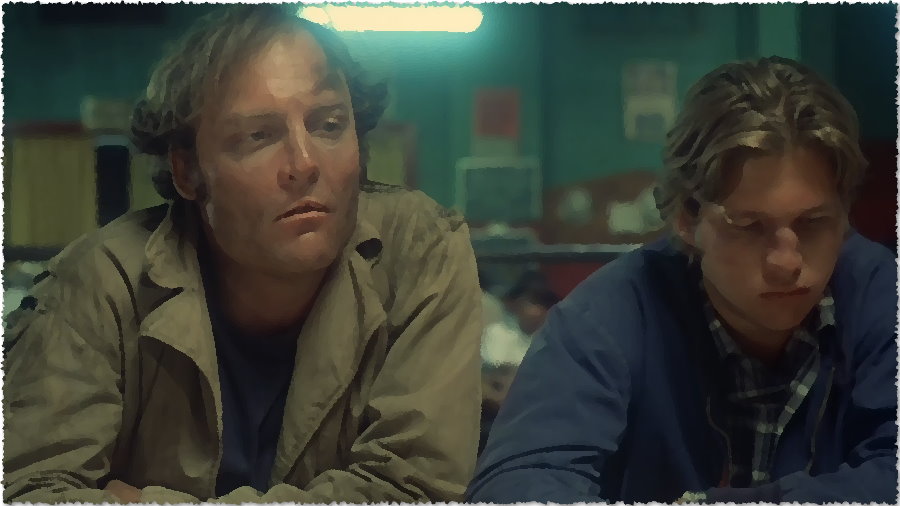 There is something universal that is felt when one witnesses a failure. Maybe human nature causes us to fear that failure ourselves, as perhaps our insight is more so revealed through the near misses, rather than the home runs. As in Arthur Miller’s Willy Loman in Death of a Salesman, or the desperation and loneliness felt within Tennessee Williams’s The Glass Menagerie, these characters long for more, and in doing so, they suffer. They seem aware enough of the outside to know that there is more, and that there could be more if only they had that missing something. Of course, very often they don’t know what that something is. Not to mention that the outside happens to be too brutal and harsh for their fantasy.

John Huston’s 1972 film Fat City is a great film that is not about a great man. Rather, he is a has been, and since his glory days, he has resigned his life to loser status. Stacy Keach plays 30-year-old Tully, a washed-up boxer who, since his glory days, has devolved into alcoholic stasis. Jeff Bridges plays Ernie, a young man ten years his junior, who seems up and coming but lacks backbone. The two men often mirror each other—on one hand, Tully has lost what he once had and while Ernie has some verve, he has yet to prove it. Perhaps Tully sees himself in Ernie and so he longs to get back into the ring to reprove himself to the world.

Neither man has a life worth envying. In one scene, Ernie is coerced by his young girlfriend into marriage. She is moody and distant and admits she is nervous that she might be pregnant. The scene is short, but one can see they have nothing in common—she merely wants to cook for him and see him everyday. That John Huston places the scene within a motionless car is important—they are going nowhere, and his marriage to her will likely also go nowhere. He might have a few boxing wins but then will resign to a life of mediocrity.

Tully, while having achieved, now has it worse. Fat City shows him living with his alcoholic girlfriend Oma, (who sucks down glasses of sherry while falling asleep with a cigarette in her mouth), perhaps one might say she is more productive when drunk, as the few times we see her sober, she sits in morning squalor, her hair mussed, while arranging a stack of cards. This is what she does with her free time. What, exactly, does she live for? Her ex-boyfriend is in jail and has left his clothes in a box, wherein she presses Tully to try on one of his coats. ‘You could clean yourself up and look real nice,’ she says, while remaining slovenly herself. The character, played by Susan Tyrrell, is a drunk and a do nothing, yet there is a sweetness to her voice beneath her pathetic desperation. She is with Tully because she does not want to be alone. Tully is with her because he is already alone.

Fat City is a powerful character study about sad people who do not necessarily know enough to realize that they should be sad. Ernie certainly doesn’t, but Tully does, as he once had a taste of glory that has since dwindled. Ernie is young, handsome, and stuck. He seems to convince himself that he should be happy when he is not. Roger Ebert opened his review stating, ‘Two men, barely 10 years apart in age, one with a lifetime of emptiness ahead of him, one with an empty lifetime already behind.’ This about sums up the argument John Huston is crafting throughout.

In one particularly moving scene, Tully has cleaned up his unaesthetic flat and is cooking dinner for both Oma and himself. Meanwhile, Oma is passed out drunk. She whines like a child. They fight. The scene reeks of pathos and desperation, as in, ‘Why do humans allow themselves to get like this? How does this happen?’ Later, Tully escapes to a bar knowing well that he must leave her if he wants to continue fighting, if he wants to avoid becoming as she. But we know full well that Oma is not the problem (even though she is a problem)—Tully is already there.

Fat City‘s final scene is most powerful, where Tully stumbles into Ernie, who is married with child. He attempts to lure him into a bar, but Ernie insists that he does not drink. They settle on a cup of coffee. Then, when an old gentleman pours them their coffee, Tully remarks, ‘Imagine being him,’ as if to imply this old man serving coffee is somehow a failure. ‘Maybe he is happy,’ Ernie replies, wherein Tully responds, ‘Maybe we’re all happy.’ We then see the old man smile. Tully’s remark is especially arrogant and lacking in self-reflection, as who is he to know the life this older man has lived? Perhaps pouring coffee brings him a kind of peace. I recall once visiting a winery where the server was this older woman who said, ‘I spent my years operating heavy machinery and now in my retirement I pour wine and I love it.’

People have a bad habit of compartmentalizing others into where we think that person only exists to serve us. In this case, the older gentleman is nothing more than a coffee server. His previous years are abolished. ‘Do you think he was young once?’ they ask. By his smile, we sense that the older man likes what he does. Again, what life has he lived? And who is the alcoholic Tully, who fears being alone, to criticize?

I recently turned 45 and upon being asked how my life differs from my youth, I remarked that people have stopped asking me what my life plans are. They presume that everything I am I will always be. This, of course, is not true given the copious amount of writing I have produced. But they don’t know that. And even without that, why is someone’s satisfaction—that is, the man who pours the coffee, not enough?

In watching Fat City, I can see how John Huston has influenced a number of other films. Not just the obvious Rocky, but also Aronofsky’s wonderful film The Wrestler, which is also about a once-winner turned loser. Sometimes these losers can instruct us on our own lives, as we look on, judging, saying we would and could never be like them. But perhaps they are not so unlike us after all. Perhaps we should all pour someone else’s coffee and be so lucky.

If you enjoyed this review of John Huston’s FAT CITY, check out the automachination YouTube channel and the ArtiFact Podcast. Recent episodes include an interview with singer Eva Schubert on writing good songs, an in-depth look at Elizabeth Barrett Browning’s “Sonnets from the Portuguese” with poet Joel Parrish, a philosophical look at kitsch, aesthetics, and NFTs with UK painter Ethan Pinch, and a long discussion of photography from Alfred Stieglitz to Fan Ho and Vivian Maier.

More from Jessica Schneider: Choose Your Quarrel: Why Creativity Can’t Be Taught, Without Rain: King Hu’s “Raining in the Mountain” (1979), Lost Within a Maze of Ballet – “The Red Shoes” (1948), Revisiting Childhood Memory Within “El Sur” (Victor Erice, 1983)