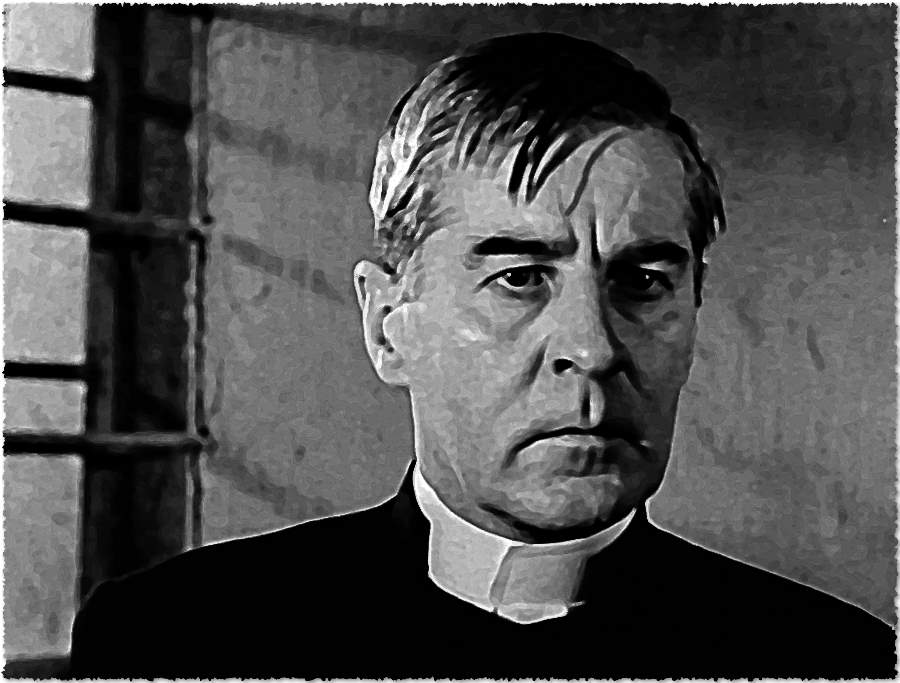 There are some who embrace suffering—who endure it, and they do so with sanctimony. Hence, they believe others should not only endure it, but should also welcome it. To suffer is to attain salvation, and to reject it is nothing short of selfishness. I once had an employer who, upon hearing my unhappiness vis-à-vis my career, would reply, ‘Well, what can you do to change your attitude?’ My admission of misery was, in her mind, ‘bringing down the team’ (even though the team was already down). Overworked, just because one group was able to scrape by on limited resources doesn’t mean that another should be forced to undergo the same: i.e., ‘Well, they were able to suffer through it and so should you.’

Alas, I digress. Rather, this is Ingmar Bergman’s film, and what a great film Winter Light is. In 80 minutes, he manages to encapsulate an existential crisis, the rejection of love, the rejection of faith, and the rejection of self. Those who believe in God are still bound by their bodies, by their emotions. This limits the amount of suffering they are able to undertake. Within this filmic world, it is always Sunday and it is always cold.

Tomas (Gunnar Björnstrand) is a pastor who, despite his physical ills (he coughs continually and has the flu) conducts mass perfunctorily. The aisles are spare and it feels like no one wants to be there. Tomas is still very much in love with his deceased wife, whom he uses against Marta, a schoolteacher (Ingrid Thulin). Marta is overly attentive and she emotionally craves from Tomas what he is unable to give. In one scene, he levels her with his words, describing that he is sick of her physical ills and that he ultimately finds her repulsive. Thus is the sort of needling which takes place in Winter Light:

I don’t love you, because I love my wife. When she died, so did I. I don’t care less what happens to me. Am I making myself clear? I loved her and she was everything you could never be, but insist on trying to be. The way you mimic her behavior is such an ugly parody.

Marta cries and wipes her eyes. ‘I didn’t even know her,’ she says. ‘Stop rubbing your eyes like that,’ he orders. ‘Sorry,’ she replies. Arguably, Marta forgives too easily.

Their exchange takes place after a man’s suicide. He is a fisherman named Jonas (played by Max von Sydow) who is experiencing paranoid thoughts of annihilation. Earlier, Jonas visits with Tomas in a moment of desperation, but in that same moment Tomas is faced with his futility, realizing that he has nothing to say aside from platitude and Biblical drivel. ‘What a ridiculous image,’ he mutters, upon noticing the cross. He runs his fingers over his desk as if to reassure himself of reality—he can touch his desk but he cannot touch God. He wants his wife, who is dead, but he does not want Marta, who is alive. Marta has rejected God but she still wants Tomas, who refuses to marry her. (The most famous scene is a several minute clip of Marta reading a letter that she’s written to Tomas, and in typical, lovely Ingmar Bergman fashion the letter is long and literary in its beauty.)

In his review, Roger Ebert notes, ‘There is more silence here than the silence of God. Tomas’s late wife is wrapped in the silence of the grave. Tomas is silent to the need of the fisherman. He cannot respond to Marta’s love except by stern silence and rejection.’ Tomas is emotionally cold but his view is understandable. He possesses a detached quality, as though a part of him died along with his wife. He appears to move about without smiling or feeling pleasure. Then, when pressed by a woman’s love, he rejects it.

Perhaps the crux of Winter Light occurs with the sexton (Algot), who is a crippled man who rings the bell before each service. He is dutiful and compliant. He notes that his life has been filled with physical pain, whereas Christ would have only had four overwhelming hours upon the cross. Algot argues that his own life has been filled with more physical suffering than that of Christ’s, and that Christ’s worst suffering likely occurred when feeling abandoned and plagued by doubt. ‘Why have you forsaken me?’ Christ asks God the Father, whilst upon the cross. Yet despite Algot’s pain, he is a man of faith. By the film’s end, another mass is readied to begin. The pews are spare and there is a sense of obligation that is cast over all, with Tomas moving mechanically—cold, detached, and disillusioned by his own faith.

Whilst Ingmar Bergman has made many films, at his best, he is nonpareil when immersing within the human condition. On one hand, one might want to tell his characters to lighten up, but then that would be too dismissive. Within this world, it is always winter, it is always cold, it is always Sunday, and God is always silent. In fact, those who are vocal about their needs (such as Marta) go rejected. Tomas feels revulsion towards himself when he comes to realize that his advice to Jonas has been useless. ‘You must trust in the Lord.’ But how can one put his trust into something so silent? That Tomas comes to recognize this is the important part:

Picture my prayers to an echo-god, who gave benign answers and reassuring blessings. Every time I confronted God with the realities I witnessed, he turned into something ugly and revolting. A spider God, a monster. So, I sought to shield Him from life, clutching my image of Him to myself in the dark.

Returning to my opening, I recall the uselessness I felt upon informing my employer of my concerns, as she could offer only platitude and corporate-speak. The difference, however, is that unlike Tomas, she did not possess his awareness, as she was not able to decipher authenticity from faux corporate sentiment. There is something inherently lonely about being misunderstood, and Tomas, along with his faith crisis, feels he is alone in this otherwise silent world. Within his mind, no one can understand him like his wife, who is now as far from him as God.

What is it like to undergo abandonment, when the very source one is meant to trust is no longer present? There are some, like Algot, who truly believe their faith and are able to articulate it in such a way that surpasses simplicity and sentiment. Following Algot’s argument in Winter Light, I could not help but to recall The Trial of Joan of Arc, and I wonder what Joan must have felt only moments before burning alive? Did she ever doubt? What is it like to own such unwavering faith? Within my experience, I get the sense that my employer didn’t really believe the corporate-speak, but rather, was attempting to convince herself more than anyone. Such is the source of platitude—tell people what is easy and maybe they will listen and go away. Those who question, however, pose problems by making one’s clichéd world a little less comfortable.

Ingmar Bergman often gets up close to his actors’ faces. We get so close that we can distinguish the lines and hairs. By doing so, the actors are unable to turn away. Soft and vulnerable is how he wants the audience to see them. We are forced to look, as we witness them within their human imperfection. Religion claims that God is perfect. That God can never do wrong. I once heard a nun say, ‘It’s not easy being married to God, because whenever we have a fight it is always my fault.’ That Christ had His doubts must make having doubts OK. Who knows? Tomas will go on regardless of whether he chooses to smile or not.

If you enjoyed this review of Ingmar Bergman’s “Winter Light”, consider supporting us and get patron-only content on our Patreon page. This will help the growth of this site, the automachination YouTube channel, and the ArtiFact Podcast. Recent episodes include a comparison between Thomas Pynchon’s Gravity’s Rainbow and Kurt Vonnegut’s Slaughterhouse-Five, a survey of photography from Josef Sudek to Laura Makabresku, and a discussion of Hermann Hesse’s classic novel, Steppenwolf.