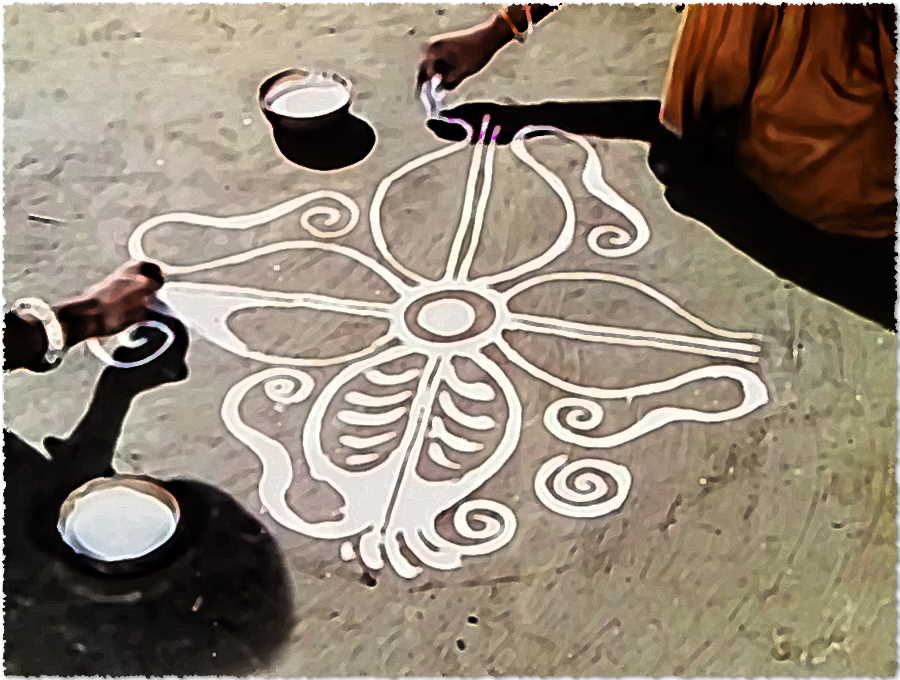 It is not easy for the child of a well-known artist to embark into his own successful, creative realm. Certainly this does happen, but what I mean is that the child of the so-called artist must manage on his own without need for the parent’s name to bring leverage. It is a tricky game, as one must thrive whilst not being in the shadow of someone else. (Jean Renoir is the son of yes, that Renoir—Pierre-Auguste Renoir—the renowned painter.) I mention this because when one is the son of a famous artist, there is always going to be a pressure to succeed and not be seen beneath the wing of the parent.

Whilst I have seen a number of Jean Renoir’s films, The River is my favorite and the most wonderful. Filmed in Technicolor, it is told from a young girl’s perspective—the romantic, distant dreamer. The innocence within offers a similarity to that of Renoir the painter, in that, this world is pleasant, beautiful and mostly without worry. There is the desire to remain young and within a kind of forever.

Patricia Walters plays Harriet, an upper-class British girl who crafts poems in her diary and dreams about the world from her lush Indian home set along side the Ganges River. Here, her world is peaceful and tranquil. She has a secret place where she escapes to write by candlelight. The film is set in the past, likely around the year 1946 following the War and we hear Harriet’s perspective in voiceover, told years later. Jean Renoir crafts his opening with Indian women using rice milk to draw circled shapes upon stone as the credits roll. And what a comfort this brings, wherein this world is about as far from War or turmoil as could be—yet it is not without the longing that accompanies one’s inward struggle.

Harriet lives in a family of girls, save one brother (Bogey) who is likely eight years her junior. He enjoys charming snakes with a flute and so eventually one bites him—a cobra. This becomes an important aspect of the film, as he dies a child and thus manages to escape the taboos and trials of adulthood. Meantime, Harriet and her next-door neighbor Valerie (Adrienne Corri) both fantasize about a young man named Captain John (Thomas E. Breen). He lost his leg in the War and has a detached quality to his personality. Apparently, the actor really did have only one leg and he wasn’t an actor. Given his average appearance and stiff performance, this is not surprising. In fact, when Harriet shares her poems with him, he seems somewhat indifferent. ‘I’ll read them later,’ he says, after becoming distracted.

According to Wikipedia: ‘Notwithstanding his handicap, he has such an atmosphere of charm and sophistication about him that the daughters are all understandably smitten with him.’ Now, I have to disagree with this interpretation. Perhaps it is a matter of perspective and that Captain John would seem charming and sophisticated to a 14-year-old girl who is otherwise fantasizing. Not like there are a lot of options, anyway. In short, he is only game in town. Otherwise, Captain John is a bit of a dud but that doesn’t matter when one is an idealizing teenager. Perhaps another actor could have conveyed this charm better, but none of this matters, as Harriet has come to love him from afar. Little does she know, however, that Captain John is more intrigued with Melanie, her Anglo-Indian friend and neighbor. Yet Melanie is not so intrigued with him, as she realizes that their cultural differences would prove to be too much.

When Harriet witnesses Captain John kiss Valerie, she remarks that this was her first kiss just as well. ‘It burned into my heart,’ the voiceover says. Whilst Harriet is the introspective artist, Valerie is merely a competitive girl, although Jean Renoir does give her some insights: ‘This…being together…in the garden. All of us happy, and you with us here, I didn’t want it to change…and it’s changed. I didn’t want it to end…and it’s gone. It was like something in a dream. Now you’ve made it real. I didn’t want to be real,’ Valerie says, following their kiss.

And dreamlike is what this world is. Set within an idyllic India without witness to abject poverty that so overwhelms the country, in such respects The River much resembles the calm of a Renoir painting. Pierre-Auguste Renoir, noted for his somewhat sugary uses of light, portrayed women as he believed they were—beautiful but lacking intellect. ‘Beautiful animals,’ he called them. Misogyny aside, Jean Renoir goes beyond his father in creating a complex character within Harriet.

Rumer Godden, who penned the novel, was the also the mind behind the Powell and Pressburger’s film Black Narcissus (1947). Both films occupy a striking universe within Technicolor. Renoir, most noted for films such as La Grand Illusion (1937) and The Rules of the Game (1939) takes a different approach within The River. In it, this world is peaceful and picturesque. One could even find herself envious, wishing that she too could be there.

Most notable is the short story within the story, involving a beautiful young woman who falls in love with a man from afar, whom she believes is the Lord Krishna. The tale, as told by Harriet, carries just the right amount of childlike wonderment and whim, whilst incorporating much of the Indian tradition. Upon reading the tale to both Valerie and Captain John, neither seems impressed. They ask stupid questions and make trite suggestions. Afterwards, Valerie steals Harriet’s diary and reads the personal passages written about Captain John. Feeling violated, ‘I could kill you both!’ Harriet shouts, as she pulls the book away.

One could call The River a coming to age. Unlike her brother who dies, Harriet is afforded that ability. When she notices the cobra in the garden, she instructs her brother to report it to their parents. Of course, the rebellious child that he is, he doesn’t do it and this costs him his life. Blaming herself, Harriet clings to his flute at dinner, whilst her mother fights back tears. ‘We go on like nothing happened!’ Harriet cries. Indeed, if only she hadn’t been so distracted by Captain John, she would have informed her parents herself and Bogey might still be here. Wishing to drown in the river, she is rescued by ship. It is there where Captain John comforts her, saying just the right words. ‘Harriet, perhaps someone will still be reading your poem in 4000 AD’. Whilst not a particularly deep observation, (I said that Captain John is a bit of a dud) it is enough for Harriet to inform him that she loves him. This, in itself, is enough to keep trying at life.

The river is something continuous and always. Ever moving and changing, it is a symbol of birth and rebirth. At the film’s end, Harriet’s mother births another child—a girl. Meantime, Harriet, Valerie and Melanie all receive letters from Captain John, who has traveled to America. Upon word of the new daughter, the girls abandon his letters into the wind. He’s become yesterday’s news. ‘Ten minutes ago she wasn’t born and tomorrow we will be used to her,’ Harriet says with regard to the baby. The girls bond and they laugh. As such is life. The River is not a convoluted, complex tale. Rather, it moves without the melodrama and much within an idyllic daydream despite the growing pains. According to Harriet, this is life. Beautiful, innocent, tragic. And who is to say that life cannot otherwise be that?

If you enjoyed this review of Jean Renoir’s The River, consider supporting us and get patron-only content on our Patreon page. This will help the growth of this site, the automachination YouTube channel, and the ArtiFact Podcast. Recent episodes include a debunking of Internet sciolists such as Jordan B. Peterson and Christopher Langan, a breakdown of Elizabeth Barrett Browning’s Aurora Leigh, and a long discussion of photography from Alfred Stieglitz to Fan Ho and Vivian Maier.