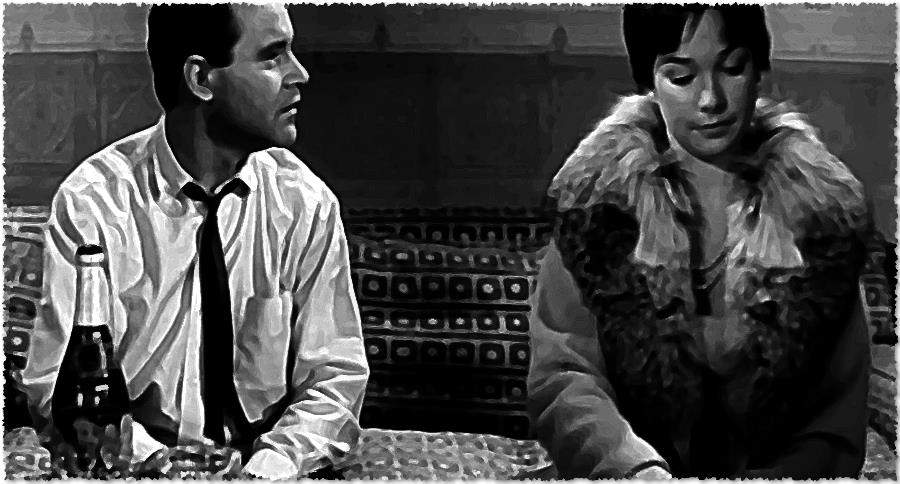 ‘There are some who are takers, and then there are some who get took,’ says Shirley MacLaine’s character in The Apartment. And so goes Billy Wilder’s 1960 witty classic, where we are given a black and white world of work-life drudgery, typing pools, aloof executives and the onlookers who long for any advancement as a way out. Jack Lemmon plays C.C. Baxter, a guy who memorizes facts—like how many people there are in New York City and how long they would stretch if he were to line them together. ‘They would reach Pakistan,’ he says in his opening narration. Useless would be a word to describe this sort of knowledge. And useless could very well be a word to describe him, were it not for his apartment. In fact, he better make himself useful, lest he never get that raise or windowed office.

It’s not that Baxter hates his job—working amid a slog of desks that evokes Franz Kafka. (Orson Welles directed The Trial two years after The Apartment). That Billy Wilder might have influenced his direction is obvious.) He is too upbeat for that—so to speak. Yes, we know underneath the facade that he is lonely and miserable, but for the sake of promotion, or at least the hopes of one, he must remain positive. See, he has this apartment in NYC that many of the higher-ups know about. Not only do they know about it, they depend on it for their evening trysts. Baxter allows them to frequent his abode in the hopes that they might promote him someday. It gets so bad, in fact, that when he actually needs his own apartment due to feeling ill, he is once again manipulated into loaning it out.

Of course, his neighbors all think he is the ladies man, while with every night they hear noises and see people coming and going. But little do they know that Baxter is very often standing outside in the cold, waiting for his self-invited guests to leave. Fran Kubelik, (played by Shirley MacLaine) works as the ‘Elevator Girl’ (I guess they lacked respectable titles back then), who longs for a married man who strings her along with promises of leaving his wife. Baxter takes an immediate liking to her. Sassy and melancholic, she too hates her job, and in her mind she believes the only way out is to become the boss’s wife.

Except there is a problem. The man in question is Mr. Sheldrake—an obvious narcissist who has had multiple affairs and Fran is just one of many. She knows he is a jerk, but she admits to still loving him. Mr. Sheldrake is also the boss promising a promotion to Baxter if only he will loan him his apartment key. ‘I’m gonna say good things about you at our next meeting,’ Sheldrake claims, in a moment of future faking. O, the irony.

Billy Wilder’s direction is notably clever when he uses a cracked compact mirror. Baxter finds it in his apartment and then hands it over to Sheldrake. ‘This was left behind,’ Baxter says. ‘She threw it at me,’ Sheldrake replies. Later, Fran loans Baxter her compact mirror whist he is trying on a hat. Unknowing what to say, Fran asks him what is wrong. ‘It’s cracked,’ Baxter responds. Crestfallen, Baxter now knows that his beloved Fran is banging his boss.

One could certainly examine The Apartment as a romantic comedy, but the dialogue is much too clever. There is something to be said about being too willing, too accommodating, and for this, both Fran and Baxter share that in common. To return to her quote, ‘There are some who are takers and some who get took.’ So what transpires? At the rejection of Sheldrake, Fran attempts suicide by swallowing a bottle of sleeping pills. And it is only through the help of Baxter’s neighbor, Mr. Dreyfuss, a physician, that she is able to come to. That the film takes place during the week of Christmas and New Years only accents these characters’ loneliness. They are not drifters, but they have nowhere to go. Baxter has no family, he says. Likewise, Fran clings to Sheldrake, a man she knows is both married and puts her continually on the shelf. He does not love her. We know this, but does she?

Baxter, however, does love her. She remains in the apartment over the next two days. They have dinner together wherein he uses his tennis racket to strain the pasta. They laugh. ‘Why can’t I ever love a nice guy like you?’ She asks. At one moment, Fran discloses her life story, which is filled with disappointment and melancholy. Turns out she could not hack secretarial school due to her poor spelling, and so she was then made an ‘elevator girl.’ Her life dreams are minimal, but she has a good heart and a warmth. Most certainly she deserves more.

There is something said of those who strive to please too much. Sycophancy perhaps? Or is it more complex? To give and give only will result in what more? Eventually, Sheldrake does lose his marriage but only because his busybody secretary, Ms. Olson, informs his wife of his affairs. His wife leaves him. So now Sheldrake is a free man. Hitting up Fran, as the sloppy seconds, only seems so-so to her. Fran seems to have evolved since knowing Baxter, and Sheldrake’s offer is just not good enough. Meanwhile, Baxter has decided to quit his newly promoted job when Sheldrake demands the coveted apartment key, and in a moment of rebellion, Baxter hands over the washroom key instead. ‘I won’t be needing it,’ he says.

The film, while witty in delivery, manages to take the characters above their plot points. This, in part, is due to the great acting, but also the screenwriting that rises above what one would witness today. The characters are archetypal but never stereotypes. The ending, then, delivers a fine twist, wherein Fran visits Baxter’s apartment on New Year’s Eve. She is at first startled upon hearing a loud pop that sounds like a gunshot, but is relived that it is only his opening a bottle of champagne. She sees he has boxed many of his things. Not knowing where he will relocate, the two move to the couch to play cards. ‘I love you,’ he says. ‘Shut up and deal,’ she replies. This is a nice subversion of cliche—no kiss, no ‘I love you too,’ no Hollywood overt schmaltz, but rather, genuine affection between the two.

The Apartment is not a great film, but it is an excellent one. I recently got into an argument with someone over which word had more power—great versus excellent. I said that great was all encompassing and rose above others of its kind. To be excellent is to be in top tier, within that similar kind. Is there a difference? Yes. Billy Wilder’s films are witty and cleverly written. He is excellent. We remember his characters as well as his direction. This is a film that hits on several levels. Too much giving can lead to others taking.

Also, what lives within the slog of the workforce? Is it worth your esteem, your respect, your brown-nosing, just to get ahead? What does ‘getting ahead’ even mean? What does that entail? Get ahead. Will anyone remember those who do? Who are they? Nameless. Billy Wilder is the artist here. We remember.