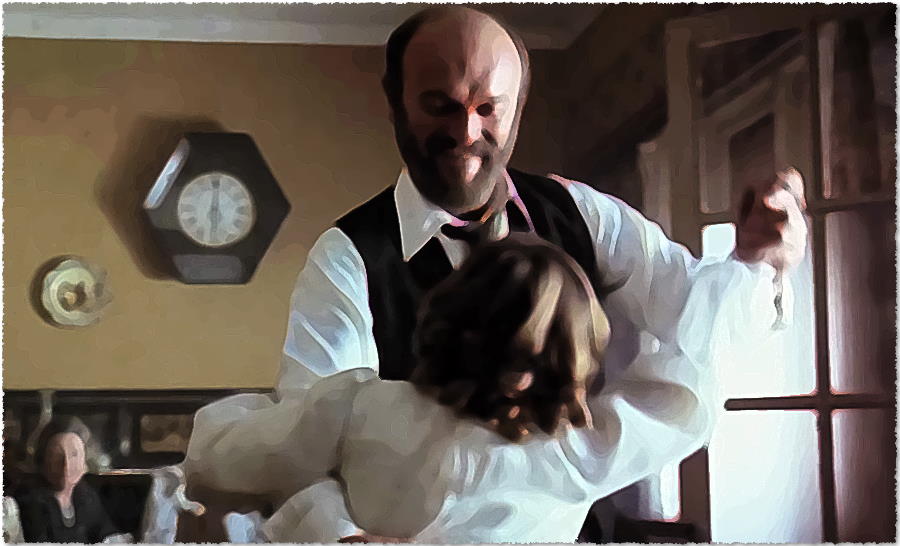 We often remember our childhood within a series of vignettes. Some might say that it is not what we remember but how we remember that determines not just our childhood, but also our life perspective. Moments enter us and then they flee without even a goodbye. Then, we don’t necessarily recall the narrative, but rather, we remember the emotional impact some moment has had. Victor Erice’s 1983 film El Sur is a masterpiece that involves just this. The film takes place within the mind of a child who, in recalling her father, remembers only select parts of their time together. We see pieces of him, but only through her eyes, and as an audience, we come to realize him as an enigma—that is, only as how she sees him. We do not know much, save for what she—Estrella—has experienced.

The story begins in 1957 when Estrella is a young child. The Spanish Civil War still lingers from two decades earlier, and we see that this young girl longs for her father (Augustin), a doctor who she believes has magical power. Yet Victor Erice’s film is not about magical realism as much as it is about childhood romanticism. Estrella romanticizes her father—this distant man who only reveals himself in piecemeal. He is private and aloof, distant and detached. And while he does not carry coldness, he seems preoccupied within his own mind.

His young daughter, who clearly loves and adores him, is kept on the fringe. Upon receiving her first communion, she is informed that her father will, in fact, show at church, despite never having previously done so. Before the ceremony, she waits for him outside, as she hears shots fired at a distance. What could be happening just then? What circumstance has involved him? We, as the audience, only know as much as she.

The film opens with Estrella waving her father’s pendulum in front of her face, as she knows full well that he will never return. A doctor who spends much of his time away or in the attic, he remains hidden. Upon her asking about the attic door, Estrella is told that it must remain shut, lest the magic will be let out. Estrella believes this, which only adds to the adoration she feels for him. He is a man of wonderment and mystery, and the very thing she longs to be close to.

The first hour involves Estrella as a young child—seven or so, and then in a wonderful moment of cinematography, she ages to 15 in just a single bike ride. We watch her pedal down the road under the canopy of trees with her young dog, only to return several seasons later, much older, with her dog full grown. This is a wonderful cinematic moment within narrative art involving the aging of a character.

Estrella’s mother informs her daughter that Augustin does not wish to return to his childhood home (located within the south of Spain) due to conflict with his own father. Supposedly, his childhood is too painful for him to ever return to. The south (El Sur) is this place of mystery within Estella’s mind. Just what is it about this place, from where her father spawned? And what does he do with his free time? In one moment, she locates a piece of paper with his writing upon it. He has written the name Irene Rios over and over. Who is this woman? Upon investigation, Estrella finds him at a local theatre, whereat she comes to learn that Irene Rios is a character within a film. Her father watches and then goes on to write a letter to a woman named Laura whom he later claims resembles the actress.

Here, we are given snippets into his character, and we only know of him as much as that of his daughter. As her father, he is shrouded in mystery. She sits apart and longs for him, so much so that even when a young male suitor is romanticizing her, she does not take him seriously. But her father? Estrella loves him. Why can’t they be closer? Why must he remain such an enigma? This film will resonate with anyone who has ever wanted to know more about another—that distant someone who only shares themselves in parts.

Quite simply, El Sur is one of the most realistic depictions of childhood memory I have ever witnessed. It is not schmaltzy or sentimental, and yet this is a film that involves a father’s suicide. We don’t know why he wishes to die, or what has troubled him up to this point. We are given hints, but they are not enough. In a final scene, Estrella meets her father at the Grand Hotel and they share a brief exchange. He has warmth, and the love for one another is present. Eventually, they say their goodbye, wherein the narrator (that is, Estrella years later) notes that this was the last time she saw him. We then see the lower half of his body, with a rifle beside. He went alone in a field to die. We do not know his reasons any more than this young woman would. His daughter, left heartbroken by his loss, chooses to live with her relatives in the south—to finally embark within El Sur—this magical, mysterious place she has only heard about.

Victor Erice only directed three films. His 1973 film, The Spirit of the Beehive, also involved a young girl on the cusp of the Spanish Civil War. He seemed to involve himself well within the realm of loneliness and isolation—where memory and nostalgia are one’s only comforts. El Sur is based on a novel by Adelaida Garcia Morales, which I have not read. Supposedly, according to an article within The Guardian, Victor Erice planned the film to be over three hours long, but was cut short. Instead, we are given 94 minutes into the mindfulness of childhood dream and sadness. The longing we feel, that comfort that dwells within that someone we adore.

I titled this review, ‘Revisiting Childhood Memory,’ and upon doing so, I wondered if I was being redundant with the first word. Revisiting. But then I thought, what else is memory but revisiting? And do they, that is, our memories, not ultimately become us—become our childhood? Are we not reliving, revisiting our childhoods each day, within each experience? How many years must pass before the hurt of a loved one’s loss subsides? Or does such loss only wax with time? We think that mystery should be reserved to the future. But what of the past? Is it not every bit as unknown? Only in reflection do we seem to find it.