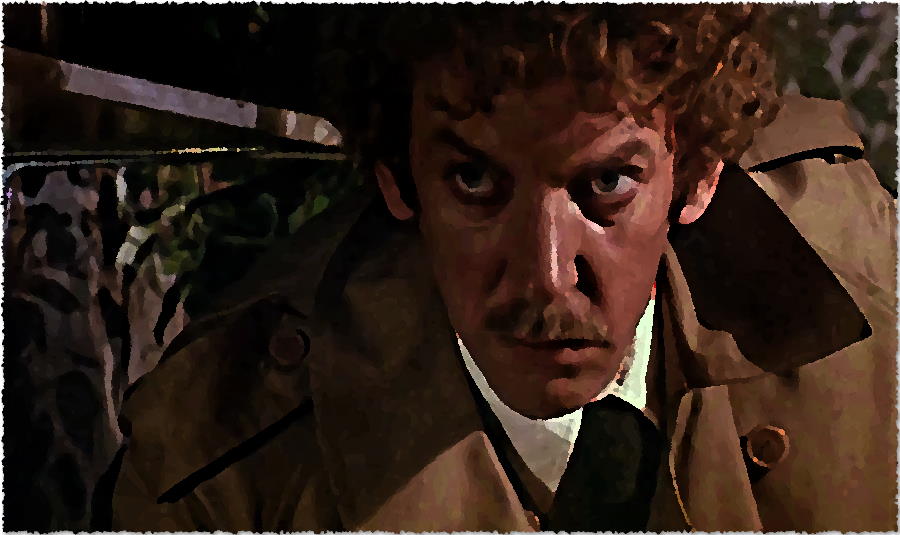 Imagine watching a film and lacking the ability to imbue more into it. Taking it only on the surface, and viewing it as nothing more than mindless entertainment. Emotionally stolid and passionless, you finish it and no impression has been left upon you. As example, The Planet of the Apes is ‘just about monkeys,’ and Animal Farm is ‘just about pigs.’ Do you feel better? In fact, do you feel anything? So, you have decided to be passionless. If it is not in the media, then it doesn’t matter. If academics, governments, and institutions are praising it, then it must be a great idea. Ok, so it isn’t the best-constructed argument, but it’s not like you’re able to notice the difference anyway. Besides, you had something else make up your mind.

These are some of the undercurrents I noticed when rewatching this remake of the 1956 classic, Invasion of the Body Snatchers. Yet Philip Kaufman’s 1978 film is not only better and richer than the original, but is its own film entirely. How it begins is this: we see small entities appearing as plants, which we only later learn are toxic entities from outer space. They want to thrive, overtake us, and they know just how to do it.

Matthew Bennell (Donald Sutherland) works as a public health inspector. When he arrives at a high-end French restaurant, the owner puts on a fake smile. The workers grow silent as their gazes fuel their contempt, directed at Matthew. He walks through the kitchen and then pulls a round object from a pot of broth. ‘What is this?’ he asks. ‘It’s a caper,’ says the restaurant owner. But Matthew insists that it is a rat turd. ‘If it’s a caper, then eat it,’ he suggests. Following his inspection, a wine bottle has been thrown at his car, cracking his windshield. There is heated emotion in the air tonight. But rest assured, that will soon all go away. Moments as these are important, as they set an emotional precedent that will contrast later in Invasion of the Body Snatchers.

Elizabeth Driscoll (Brooke Adams) is Matthew’s colleague and it is clear that he is in love with her. But the only problem is that she has this boyfriend. ‘He’s changed, Matthew,’ she informs. ‘Then it can only be for the better,’ Matthew jokes. See, there are these little pink flowers that have been growing on trees for some time. They’re so unalarming that they’re even pretty. Elizabeth pulls one off the vine and smells it, appearing harmless enough. That night, she places the bud into a glass of water. Then, by the next morning her boyfriend, Jeffrey, is acting strangely. He stands outside for long periods, unemotively waiting for the trash to arrive so he can dump the dust of his previous body. When you sleep, that is when they come. They absorb your mind and your memories. You are no longer. They replicate a version of every person, and subsequently the original or ‘real’ person dwindles to dust. What remains is a passionless, unexcitable pod incapable of spontaneity or feeling. Thus, anyone with any emotional reaction has not yet undergone the change.

Philip Kaufman has directed a very clever film. The characters engage in real-life banter that is both funny and endearing. As example, Dr. David Kibner (Leonard Nimoy in a very convincing, condescending role) shares exchanges with Jack Bellicec (Jeff Goldblum), an overlooked poet who is resentful of Kibner’s popularity. In fact, he calls Kibner’s latest self-help book ‘pure garbage’:

Kibner: Face it, Bellicec, you got some friends who enjoy playing practical jokes.

Furthermore, there are many horror/noir references throughout, wherein Philip Kaufman plays homage to those films from before. Titles include: Night of the Living Dead, Carnival of Souls, Experiment in Terror, The Third Man, M, Vampyr, and even some Twilight Zone. They come for you when you sleep, in shadow. The shadows consume the buildings, and characters peek brokenly out from windows and closets. You can fool them, if you walk slowly and don’t react, but somehow they will figure you out—the dead always win. If you run from them, they will chase you as they squeal like pigs.

Obviously, Invasion of the Body Snatchers holds a tremendous message. It’s been said that the 1956 version was a metaphor for McCarthyism. It seems like most works during the 1950s were such (The Crucible, anyone?). But beyond that, there is certainly more. How many of us move about, motionless within and yet don’t challenge what occurs around us? Dr. Kibner presents himself as the ‘authority figure’ attempting to gaslight those who approach him. He reassures that they’re imagining it, that they’re the ones inventing it, as it is they who wish to avoid intimacy. But we then come to see he is in on the conspiracy. All of them—the entire city—are in on it.

One day, a man at a dry cleaner complains that his wife is not really his wife. ‘That is not my wife,’ he says. Later, we see him again relaying the fact that everything is ok now. Same for the woman in the bookstore—she too is ok now. ‘That is not my husband,’ she says. This mirrors Elizabeth’s experience with her boyfriend, Jeffrey. Everywhere this is happening because the human pods are working to spread it. They meet throughout the day and into the night, passing unknown items to one another. Only later do we learn that it is the plants they are passing.

Donald Sutherland is excellent in this role. That he has feelings for Elizabeth is explored naturally and subtly, as they never engage in a trite affair, but rather remain professional. This added emotional layer contributes to the contrast of what all humans will ultimately become. Is love something felt or merely an item of convenience? One by one, each human is replaced. A pod has replicated them. They move through the necessary motions, through the automated mire of non-feeling. In fact, the only time the pod people ever seem to get excited is when they notice someone has not undergone ‘the change.’ In an instant, they go from walking passively, to running and squealing like pigs. (According to IMDB, actual squealing pigs were used for the sounds.)

Think of culture and how so many don’t want to offer any contrast. Rather, they engage in corporate speak and they resent anyone who contests them. Their so-called ‘happiness’ is not real, but a facade. ‘This is how one is supposed to act, to think, to feel.’ Everyone should want what everyone wants and if not, then there is something wrong. Events are only a problem if it affects them. These sorts of pod-like behaviors can manifest in multiple ways, and Invasion of the Body Snatchers succeeds at showing this. As example, Dr. Kibner is the typical authority figure that refuses to listen, as he reassures that ‘everything is ok,’ and ‘it’s all in your head.’ Then, after a while, people stop fighting and they start believing, as life grows simpler when the masses do the movements for you.

For a film marketed as frightening, the involved fear is more psychological than a typical thriller. Philip Kaufman’s intricate direction, his use of shadow, angles, and light—at times, this feels like this could be a black and white film. The pods move among us, they meld into the twilight, in search of spreading. One might say this is a mirror of society, yet the only difference is that in the film, those who are pod people know it. This is not always the case in life.

If you enjoyed this review of Philip Kaufman’s Invasion of the Body Snatchers, consider supporting us and get patron-only content on our Patreon page. This will help the growth of this site, the automachination YouTube channel, and the ArtiFact Podcast. Recent episodes include a discussion with Norman Finkelstein and Palestinian refugees on their memories of war, a dissection of Ryusuke Hamaguchi’s “Asako I & II” and “Drive My Car”, and a critique of James Cameron’s Terminator films.

More from Jessica Schneider: Beyond the Comfort Zone: Louis Malle’s “My Dinner With Andre” (1981), ‘But They Both Wrote About Hawks!’: Robinson Jeffers’s “Hurt Hawks” vs. Ted Hughes’s “The Hawk In The Rain”, Shadows & Windows: On Chris Marker’s “La Jetée” (1962)