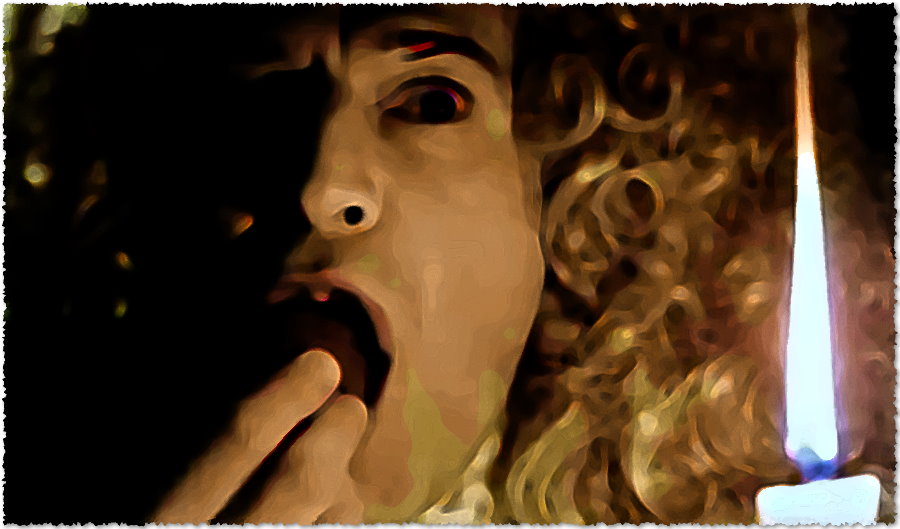 Peter Greenaway’s The Draughtsman’s Contract doesn’t immediately offer itself up for easy assessment. There is much that’s attractive about it: the exaggerated period design, the score’s well-done pastiche, and incredibly mannered dialogue and acting serve well to conceal the narrative’s darker forces. And it’s certainly a dark affair, with its lust-fueled designs and intimations of murder. Murder so artfully concealed throughout the course of the story and which, as the denouement approaches, becomes more and more a grim actuality.

But don’t let yourself be fooled by all the feints and quirks (rather, simply view them for what they are) – it’s a very good film, and a funny one, too, perhaps kept from leaping over the bar into greatness by its distractions, visually appealing as they might be.

The Draughtsman’s Contract, set in 17th century England, begins simply enough: Mr. Neville (Anthony Higgins), a draughtsman as well as an arrogant rake, is beseeched by Mrs. Virginia Herbert (Janet Suzman) at a soiree to complete a series of drawings of her husband’s country house, Compton Anstey, while he vacations elsewhere. Mr. Neville accepts, but only on the stipulation that he is allowed to use Mrs. Herbert’s body for his pleasure during the course of his employment. She is visibly appalled, but relents, for she professes a desire for reconciliation with her husband, which should in some way be brought about by these drawings. Already, things seem awry, what with all the hushed exchanges and gossip that inundate the opening scenes, and this most disquieting of contracts.

Mr. Neville sets about accomplishing his task: twelve drawings, all of different portions of the estate. His requirements are strict, as the scenery is to be (mostly) without people and must be in the same exact state as it was when he first began drawing it. Here is a telling exchange, between Sarah Talmann (Anne-Louise Lambert), Mrs. Herbert’s beautiful and intelligent daughter, and her husband Mr. Talmann (Hugh Fraser), a foppish mainlander who holds the cocksure Mr. Neville in disdain, as they observe the artist at work:

TALMANN: Your Mr. Neville, Sarah, has the God-like power of emptying the landscape. It is a wonder the birds still sing.

SARAH: If they stopped, I doubt whether Mr. Neville would appreciate the difference. His attitude to nature is strictly material.

Indeed, his whole approach seems an imposition of man’s rational mastery over his chosen subject, natural or otherwise; although undoubtedly he takes carnal pleasure in his liaisons with Mrs. Herbert, who, after their first tryst, cannot help but vomit – although the reasons for her revulsion become somewhat more ambiguous as The Draughtsman’s Contract progresses.

Also present are Mr. Thomas Noyes (Neil Cunningham), a friend of Mr. Herbert who handles the family’s business affairs (in fact, he writes up the contract between Mr. Neville and Mrs. Herbert), a child nephew of the Herbert house who never speaks whilst ferried about by his German tutor, the various legions of help and aristocrats, and – weirdest of all – a dark-painted, nude figure credited as a living statue (Michael Feast), but could also be some Bacchic spirit summoned by the debauchery within Anstey. He skulks about the estate mischievously, morphing back and forth between immobility and action, his own affairs taking on strange undertones as they are weaved through the main plot.

At about an hour into The Draughtsman’s Contract, the dynamics are clear: Mr. Neville has finagled himself – in the most serpentine way, legally – into a position of superiority over these landed gentry. Not only can he order them, and their help, around with impunity, he has the express permission (one meeting a drawing, specifically) of Anstey’s madam to take pleasure out of her body as he sees fit. This would be at home in de Sade, if the artist’s assault was not so courteous.

Suddenly, however, oddities appear: a misplaced coat here, and a ladder propped against a window there, all break the rigid uniformity of Mr. Neville’s staging. A downstairs functionary gone lax in their duties, or, perhaps, something more sinister. Sarah Talmann talks of a corpse. Of her father, specifically, who went missing after not having been received in Southampton, as ordained. The coat belongs to her father, and the ladder? It leads up to the man’s wardroom.

What of Mr. Neville? Is he an accessory to this murder, or simply portraying the landscape as it is? Mr. Neville scoffs at the prospect of a killing – much less his involvement in it – but, curiously, Sarah makes a proposition, in return for distracting any suspicious folk from the seeming implicatory evidence contained in the drawings: an arrangement much like the one between Mr. Neville and her mother, although this time, with Sarah as the dominant party and Mr. Neville her plaything.

A turning point, and a crucial one. Now, I usually don’t care for spoilers, but there are exceptions. While it’s no plot-driven murder mystery a la Agatha Christie, there is great pleasure for the viewer in watching the events unfold sans any foreknowledge, so I’ll leave it and say that upon this suspicion of (even more) nefarious deeds at Compton Anstey, it is called into question who, exactly, is in power, and what is being surrendered, as Mr. Neville completes his recreations, and those in Anstey manage their own shadowy business – and mist descends.

Outside of plot intrigue, there is much to recommend about The Draughtsman’s Contract. Peter Greenaway’s background as an artist serves the visual nature of this film well. So much of the shots are deliberate compositions and many of them are framed within and around Mr. Neville’s various apparatuses, namely a rectangular frame divided by wire into four smaller frames. Often, Greenaway will cut between the actual landscape of Anstey and the sketch prepared within the frame, juxtaposing the vista with its black-and-white representation. This technique is helpful in showing the viewer the discrepancies involving mislaid items once they appear, as Peter Greenaway’s edits are purposeful enough for an attentive viewer to catch the discrepancies even before they are mentioned by characters. The frames also inadvertently form a sort of crosshair shape around the subject. This becomes even more interesting once people are placed closely into the frame and they resemble targets in a sniper’s sights.

The editing, in general, is sterling, especially in the opening soiree, as Peter Greenaway flits between conversations and closeups with aplomb, allowing the viewer to build the story using these brief snatches of conversation, without bogging the viewer down with exposition – which would be especially egregious considering the ornate period dialogue. And the acting? All marvelous: Higgins as Mr. Neville is pitch-perfect, as he never falters in the character’s utter confidence in himself, nor does he overplay his aggressive domination of Mrs. Herbert. His cold eloquence as he rips those bodices away from the trembling woman makes the dynamic even more chilling than if he were to chew the scenery. Suzman and Lambert are excellent, able to both show vulnerability and conceal themselves as needed – and it is needed. As the period nature of the film is somewhat exaggerated, it is impressive how realistically the actors pull their portrayals off, never letting the absurdity seep into the genuineness of their roles’ emotions.

The score, by Michael Nyman, is a Henry Purcell-inspired delight, expressing the frenetic, triumphal, gentle, and malicious moods roiling within the film in short, effective bursts. Curtis Clark’s cinematography is similarly excellent, capturing the beauty of the gardens and wildlife as well as the deft manipulation of shadows, exteriorly and interiorly.

It should be said that the film’s original cut was over four hours long, dwarfing the released runtime of 109 minutes. What exactly was pared out we will never know for sure, although Peter Greenaway’s comments on the matter don’t really convince me that anything truly vital was lost. What I consider the film’s weaker parts (the statue digressions, mainly, and an overall lack of real heft beneath the undeniable elegance and toxically witty repartee) may have been exacerbated by the longer runtime, in fact. In any case, what resulted was a fine film, regardless. One can only cross their fingers if a director’s cut is wished for.

The ingenuity on display, here, is apparent and any cineaste hungry for a film that respects their intelligence (and taste) will be well-rewarded with The Draughtsman’s Contract. I’ll leave you with this exchange, between Sarah and Mr. Neville, when she floats the idea of Mr. Neville’s involvement in/witness to a potential murder, her pleasantries barbed by that little euphemism of “misadventure”:

SARAH: And more than a witness, Mr. Neville. An accessory to misadventure.

NEVILLE: Madam, you are fanciful!

SARAH: Mr. Neville, I have grown to believe that a really intelligent man makes an indifferent painter. For painting requires a certain blindness. A partial refusal to be aware of all the options. An intelligent man will know more about what he is drawing than he will see, and in the space between knowing and seeing, he will become…constrained. Unable to pursue an idea strongly. Fearing that the discerning, those who he is eager to please, will find him wanting if he does not put in not only what he knows, but what they know, as well. You, Mr. Neville, if you are an intelligent man, and thus an indifferent painter, will perceive that a construction such as I have suggested could well be placed on the evidence contained in your drawing. If you are, as I have heard tell, a talented draughtsman, then I could imagine that you could suppose that the objects I have drawn your attention to form no plan, stratagem, or indictment.

NEVILLE: Indictment, madam? You are ingenious! I am allowed to be neither of the two things that I wish to be at the same time!

Constrained as these figures are in the frames of (and not of) their own creation, is it any wonder that the end, when it comes, rushes in so shockingly, so luridly? Thankfully, Peter Greenaway’s frames are not so limited, and one’s attention as a viewer not treated with indifference.

If you enjoyed this review of Peter Greenaway’s The Draughtsman’s Contract, check out the automachination YouTube channel and the ArtiFact Podcast. Recent episodes include a dissection of Kurt Vonnegut’s classic novel, Galapagos, a philosophical look at kitsch, aesthetics, and NFTs with UK painter Ethan Pinch, and a long discussion of photography from Alfred Stieglitz to Fan Ho and Vivian Maier.

More from Ezekiel Yu: When Everything Was Cresting: On Wallace Stegner’s “Recapitulation”, Analysis: “Fern Hill”, “Dawn Raid” by Dylan Thomas, Crisis of Success: On Terrence Malick’s “Knight of Cups” (2015)