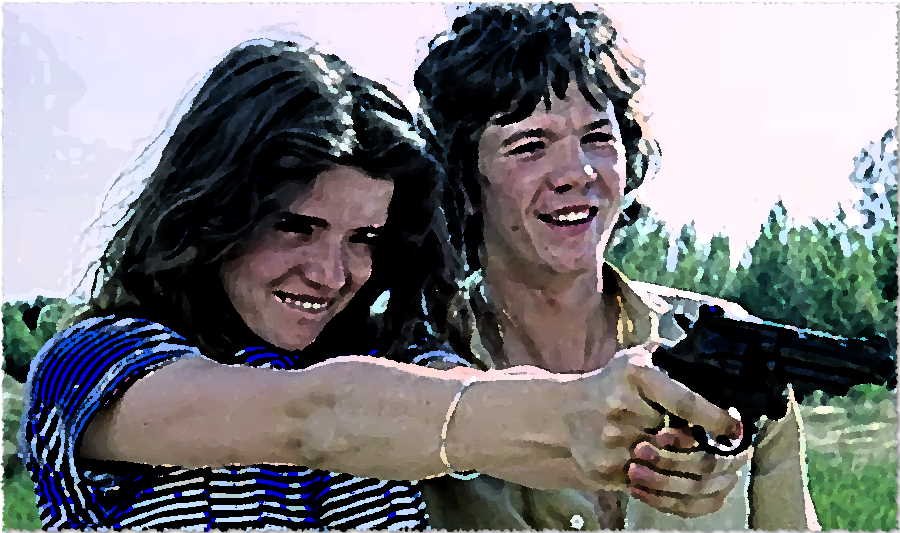 How the story goes is this: Pablo (Jose Antonio Valdelomar González) and his friend Meca (Jesús Arias Aranzueque) steal cars. They do this regularly, then carry out a robbery, and once done they burn the car they stole. They frequent the occasional bar where a young girl named Angela (Berta Socuéllamos) works. Pablo approaches her and asks her out. She agrees. He likes her and she returns the feeling, despite his living within a one-bedroom hovel. Without hesitation, she becomes his girlfriend and begins to accompany him and his two friends on various crime-filled excursions.

But Pablo is a little unusual. Yes, he has dragged this girl into his form of criminality, and he is not particularly bright or good-looking, but he is at least sweet to her. ‘You get prettier each day,’ he says, before kissing her. Pablo brings Angela to his grandmother’s house, to where the couple delivers a colored TV. His grandmother worries about the expense, but ‘never mind that,’ Pablo says. (Since the TV was obviously stolen.) Then, when Angela shoots a man in the back during one of their robberies (while wearing a fake mustache), she worries that she killed him. ‘You didn’t kill anyone,’ Pablo insists.

Like Robert Bresson, Carlos Saura hired non-actors for roles in Deprisa, Deprisa. They look the part, as those who might wander the poorer parts of Madrid during the early 1980s. What the film says is—poverty is everywhere, oppression is everywhere, and people if they’re bored and adventurous enough will try their hand at anything to escape it. This is that story, told without apology.

The Criterion Channel has recently featured several of Carlos Saura’s films, and many star Geraldine Chaplain, the actress with whom Saura had a personal relationship. (She is also the daughter of Charlie Chaplain and Oona O’Neill.) His titles include Peppermint Frappé (1967), Stress is Three (1968), Honeycomb (1969), Anna and the Wolves (1973), Cousin Angela (1974), and Cría Cuervos (1976), amongst others. Saura often engages in political undertones, where below the surface lives a political unrest, either as remnants of the Spanish Civil War or as zeitgeists within a chosen time. Moreover, much like Tarkovsky in Mirror, Saura often uses the same actors for multiple roles. As example, it is not uncommon to see Geraldine Chaplain play both mother and daughter, as well as Saura having his adult actors act out their childhood scenes. And in addition to employing similar techniques to that of Bresson (regarding Saura’s use of non-actors in the case of Desprisa, Deprisa) one can see his influence on later directors such as Michael Haneke and Yorgos Lanthimos.

While Deprisa, Deprisa could have fallen into cliché with the otherwise ‘bad kids from a bad town’ trope, Carlos Saura subverts it by showcasing each character as an individual who is privately capable of empathy, e.g., Pablo is kind to Angela and not the typical ‘abusive boyfriend’ one might expect, or when Angela, who likes having a room with plants, takes to carefully wiping their leaves with a wet tissue, or when the group is together, they promise to be ‘friends forever.’ Gone goes the bickering, aggression, and competition one might expect, as perhaps they realize that each other is all they have. In many respects, this delinquent group gets along better than many other relationships within Saura’s films, such as Honeycomb (where a married couple acts out aggressive games, only to result in resentment and death), or Stress is Three (where an abusive, controlling husband is convinced his wife is having an affair with his friend), or Anna and the Wolves (where a trio of brothers behaves far more sadistically than this group of delinquent teenagers). In Deprisa, Deprisa, one can at least understand the perspective of these poverty-stricken teens and what motivates them.

According to IMDB, ‘Jose Antonio Valdelomar González (Pablo) was recruited by Saura in a casting for non-professional actors. He was paid US $3,000. In 1992 he was found dead of a heroin overdose at Carabanchel prison (Madrid), where he was arrested for robbing a bank.’

I felt sadness upon reading this, as what is it like to be chosen to star in a well-received film, and to play a part that ultimately defines him? Near the film’s end, the group does rob a bank, but for once things don’t go as planned. Sebas (José María Hervás Roldán) and Pablo are both shot on site, only for Meca to be shot by police after burning the car. In perhaps the most chilling scene, Angela calls for a doctor to examine the wounded Pablo in their apartment. ‘This is a gunshot wound,’ the doctor says. ‘He needs to go to a hospital.’ But Pablo objects, as doing so would give them away. Then, in a desperate moment, Angela hands the doctor one million in stolen money and says that he can have another million once Pablo is cured. The doctor leaves with the money and promises to return with his equipment, only to have the day turn into night, as the doctor never returns.

Once she realizes the doctor is never coming back and that Pablo cannot be saved, she leaves with the bag of money, as well as a photo of her and Pablo. Is this an attempt to eliminate evidence or will she miss him? Some plot summaries mention that her leaving corresponds with Pablo’s death, but I don’t know if I agree. While he is in fact dying, far more concerning would be for her to leave before he is actually dead. It is my contention that we don’t really know.

I chose to review this film because of the different approach that Carlos Saura uses from that of his other films, insomuch that Deprisa, Deprisa feels like we are watching these youths carry out their lives in what is the closest to feeling like real time. Other films, like Cousin Angela, Peppermint Frappé, and Anna and the Wolves not only engage in an artifice, but often result in extremes. (It’s not uncommon for his films to end with a drastic death, as in a planned suicide or a shot to the head.) Saura, who evokes much of his personal youth into his films, is a filmmaker whose work deserves more attention. While not as poetically nuanced as Victor Erice, Carlos Saura employs the tactics of a very good, and sometimes great filmmaker. While I recommend his work (even the odd films), should you start with one, give Cría Cuervos a watch and then follow up with Deprisa, Deprisa and you will—if nothing else—be impressed by his diversity, as well as his capturing of childhood memory.

If you enjoyed this review of Carlos Saura’s “Deprisa, Deprisa”, consider supporting us and get patron-only content on our Patreon page. This will help the growth of this site, the automachination YouTube channel, and the ArtiFact Podcast. Recent episodes include a discussion of Ryusuke Hamaguchi’s “Asako I & II” and “Drive My Car”, a dissection of Elon Musk’s stupidest claims, and a critique of James Cameron’s Terminator films.