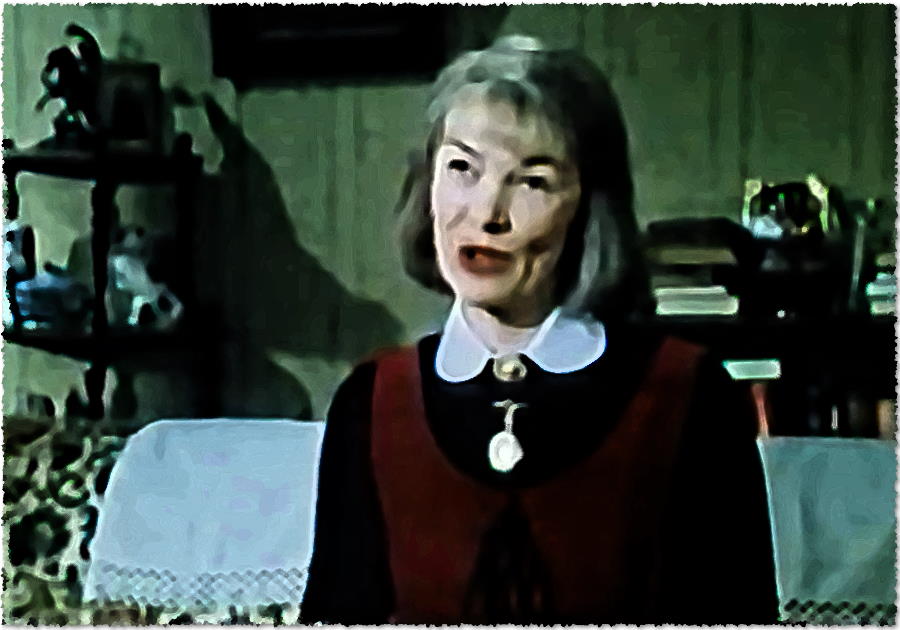 Stevie Smith (1902-1971) prided herself on her individuality. An iconoclast born Florence Margaret Smith, she lived her life in England and died of a brain tumor at age 69. She worked a publishing office job for 30 years until her poetic achievement allowed her early retirement. She never had kids nor did she marry. In fact, she shares similarities to both Marianne Moore and Emily Dickinson in that all three women have an oddness (or is it fondness) about them. Stevie Smith’s verse is unique in that she uses a nursery rhyme approach whilst addressing sad or ‘dark’ themes, often with biting humor. It was rumored that she was a combination of high wit with a dash of the naïve. But then again, aren’t we writers all a bit of this?

Stevie (1978) stars Glenda Jackson as the lead and what a lead she is. Whilst this isn’t a One Woman Show, the film focuses much on the poet’s daily life, her relationship with her affectionate aunt (Mona Washbourne), her views on life, art and poetry. ‘Not a literary person,’ Smith says, with regard to her aunt. The two laugh it up over sherry and sometimes gin. At one moment, Stevie Smith rejects a marriage proposal from a male suitor, claiming that she is better as a friend. ‘I need to be away,’ she says. ‘But I always come back.’

Within a short span of time, we witness her discussing her mother’s early death, her failed suicide attempt, the death of her aunt, her receiving an honorary medal from the Queen, to her own eventual death. Throughout, Smith mentions the awfulness of the ordinary—that she would never wish to be like everyone else. Likewise, Glenda Jackson’s performance offers a warm, witty woman who is not necessarily lonely, but like Emily Dickinson, she does not mind aloneness. Like the Belle of Amherst, Stevie Smith too rejects God and does not fear her bodily demise.

Based on the play with the same title by Hugh Whitemore, much of the dialogue consists of Stevie Smith’s own verse. At one moment, we are shown her inspiration behind her most famous poem, “Not Waving But Drowning,” wherein Smith chances upon an article about the death of a man in a lake who did not get rescued because his friends presumed he was waving. This is an astoundingly witty poem that captures both humor and pathos. Upon reading, we don’t know whether to laugh or cry:

Not Waving but Drowning

Nobody heard him, the dead man,
But still he lay moaning:
I was much further out than you thought
And not waving but drowning.

Poor chap, he always loved larking
And now he’s dead
It must have been too cold for him his heart gave way,
They said.

Oh, no no no, it was too cold always
(Still the dead one lay moaning)
I was much too far out all my life
And not waving but drowning.

In just 12 short lines Stevie Smith utilizes the scene to full effect—no excess description, only what was heard and said about the drowning man. But then her switch to the first person gives the end its power. In many ways, her work resembles that of automachination contributor, Bruce Ario, in how the language comes across as simple, yet when assembled together one is approached with something much deeper. Take her poem “Pad, Pad” involving a lover’s rejection:

I always remember your beautiful flowers
And the beautiful kimono you wore
When you sat on the couch
With that tigerish crouch
And told me you loved me no more.

What I cannot remember is how I felt when you were unkind
All I know is, if you were unkind now I should not mind.
Ah me, the power to feel exaggerated, angry and sad
The years have taken from me. Softly I go now, pad pad.

This poem is an excellent example of the wistful childlike rhyme coupled with the sadness of rejection. How many words and lines would be expended if constructed by a lesser poet? Smith is also one of the few poets who succeeds in using direct rhymes, insomuch as her ability to avoid sounding trite, forced or excessively sentimental.

It was my bridal night I remember,
An old man of seventy-three
I lay with my young bride in my arms,
A girl with t.b.
It was wartime, and overhead
The Germans were making a particularly heavy raid on Hampstead.
Harry, do they ever collide?
I do not think it has ever happened,
Oh my bride, my bride.

Once again, her use of direct rhyme is both fresh and unexpected. ‘Seventy-three/t.b./collide/bride.’ Note as well that all three poems involve memory, or an event being relayed after the fact. We are never present when it happens but rather, we are witness to her remembering, be it the end of a drowned man’s life, a failed relationship, or a war.

Glenda Jackson utilizes this reflective tactic throughout her performance, as the audience is never witness to her life moments as they happen. Instead, we are given a glimpse into her poetic world, her rhymes, and her intense love of literature. Yet within her lives an affliction. ‘Agatha Christie is so deadly serious in English…but in French, she’s so delightfully funny! Je m’apelle Hercule Poirot, un detective. Her murders are so polite!’ Jackson states, whilst laughing.

Last year, I reviewed A Quiet Passion, which is Terrence Davies’s rendering of Emily Dickinson. The film shares much in common with Stevie Smith insomuch that both films occupy an artifice. In Stevie, there are moments when Glenda Jackson speaks to an otherwise quiet audience and we are aware that a stage is present and that rehearsals have taken place. But who otherwise speaks in poetry if not a poet? Both films employ a copious use of each woman’s verse and both films succeed differently. Stevie is perhaps the more ‘poetic’ rendering, in that more audience imagination is required beyond the stage. But the strength of these two films resides not only in the witty writing but also that they are mere slices of these poets’ tales. (The films are not crib to coffin, in other words.)

Within the film, Smith spends years living with her aunt within their shared suburban home. She loathes the thought of being a suburbanite and yet she is, as this is the world she knows. Yet she is a renowned, published poet. Upon her aunt’s death, it is evident that Stevie Smith adores her and will miss her dearly. In fact, her aunt’s death seems to foreshadow her own feelings of approaching death, wherein following her medal from the Queen, she continues to live alone until her tumor takes over, which ultimately renders her speechless. There is something sad about this—to imagine a poet without words to speak. We witness the life of this talented writer for nearly two hours. Yet the film’s approach much resembles her poems—one enters in, only to depart yet again.

Ah me, sweet Death, you are the only god
Who comes as a servant when he is called, you know
Listen then to this sound I make, it is sharp
Come Death. Do not be slow.

It has been said that Sylvia Plath wrote Stevie Smith a letter with the suggestion that the two meet up—perhaps over tea or dinner? But Plath ended her life before this engagement could ever transpire. What words might have been shared? What thoughts might have been said? Somewhere, I feel there is a poem in there.

If you enjoyed this appraisal of Glenda Jackson’s portrayal of poet Stevie Smith, check out the automachination YouTube channel and the ArtiFact Podcast. Recent episodes include a debunking of Internet sciolists such as Jordan B. Peterson and Christopher Langan, a breakdown of Elizabeth Barrett Browning’s Aurora Leigh, and a long discussion of photography from Alfred Stieglitz to Fan Ho and Vivian Maier.