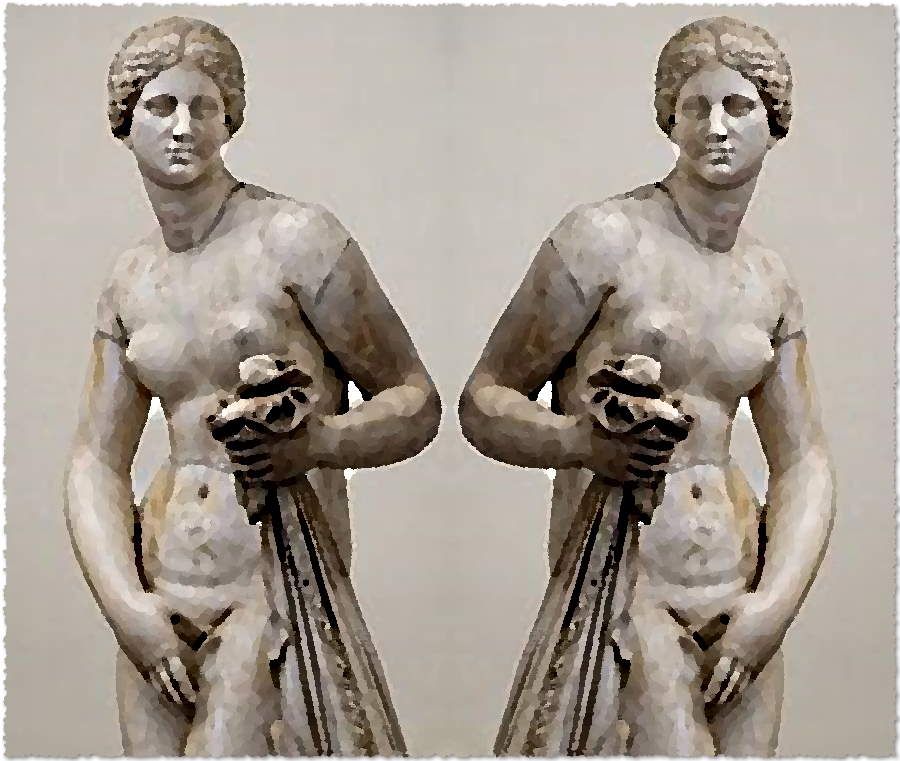 Phryne (fry-nee), whose real name was Mnesarete (“commerating virtue”) was an ancient Greek courtesan from the 4th century BCE. She was said to have been of surpassing beauty—at least to the Ancient Greeks. Praxiteles, who was also her lover, used her as the model for his statue Aphrodite of Knidos, the first nude statue of a woman from ancient Greece. This hetaera is also famous for her trial on charges of impiety, where her lawyer, seeing Phryne’s case in jeopardy, made her bare her breasts for the jury in order to incite their pity (compassion). No one wanted to convict a prophetess and priestess of Aphrodite. This story may be apocryphal, but the idea that the mere sight of a woman’s breast may lend weight to a positive verdict is interesting and maybe instructive, though our modern juridical practices probably preclude such a tactic.

There are mysteries which confound, entice, and fascinate: What is the true nature of our reality? Where, exactly, was Atlantis, if it ever really existed? How did the pyramids get built? Are aliens Out There waiting to get on Facebook (excuse me…Meta)? But one seems especially intriguing and especially titillating—why, as the story of Phryne suggests, do heterosexual men and hetero women (and many not so hetero) love female breasts?

That they do is incontrovertible. Why they do is, as the frowning and bemused King said to Anna, “a puzzlement.” The question’s answer seems to have a consensus of scientific opinion—it’s all about bonding. Of course, breasts are for feeding babies, but that’s not all—and that is confounding to some. Of course, theories have risen. One is that breasts are an icon, a replacement for the buttocks. Evolutionary pressures moved the vagina forward, and rear-entry intercourse was replaced by face-to-face relations, the breasts of women were selectively enlarged—surrogate butt cheeks—to encourage men to continue mating (seems men didn’t follow the arrow, so Evolution had a Plan B). The bonding part enters then, since men would now be facing their partners, face-to-face. Mom Nature is so-o-o clever. But if that was all there was to it, why aren’t women’s buttocks shrinking, since there is no more rear-entry imperative, no more need to invite the male organ into a woman from behind? Because it’s not all about just breeding (don’t these theorists ever get out of the lab or office?).

Another theory has it that they are an honest signal to men of a woman’s worthiness for breeding. Size, shape, perhaps firmness (this hypothesis will doubtless have a very long line of volunteer testers) would indicate, in lieu of birth certificates, a woman’s approximate age and thus, her suitability for procreation. This, on its face, is ridiculous. It implies some unconscious and always-operative metric men employ for choosing the suitability of a mating, when the whole world knows even Tupperware mammaries on a post-menopausal woman can rouse many a man to mating frenzy.

There is no direct mention in this regard, however, of our cousins and sometimes-breeding partners, the Neanderthals. They have been resurgent in the Scientific Awareness lately, having now been acknowledged at creators of art and tools and performers of burial rites. Also acknowledged is that remnants of their DNA reside in the modern human population, attesting to the idea that at some early time, humans and Neanderthals mated and produced viable offspring; given the robustness of Neanderthal bodies, that must have been an awesome collision. There is also a growing speculation that Neanderthal hyoids (a bone necessary for speech) worked just fine for them, so perhaps sweet nothings were a feature of this interbreeding.

It would be interesting—if a time-traveling machine were ever invented—to be at the dawn of modern vulvic movement. It is also sadly true, by current hypotheses, that—as climate conditions changed—Neanderthals were less adaptive in hunting smaller game and eventually their population dwindled to a point where replacement was not possible and they went extinct.  The theory I’m proposing for the hardwired attraction men have for breasts is the evolutionary response to this Neanderthalian failure to sufficiently reproduce. Just one or two percent less than Homo would eventually do to them what it eventually did.

So to keep the last of the hominid lines from suffering the same fate as their close cousins, to make sure mating continued and multiplied, men’s brains became wired to enjoy, appreciate, and crave women’s breasts—not so much for bonding (that may have been an evolutionary subtext)—but to try to ensure Homo avoided the fate of Denisovans or the so-called “Hobbits”. This signaling of a pathway for the resolution of the mating instinct seems incomplete. Isn’t the mating urge enough? It was there to ensure propagation of the species, breasted or not. The bonding theme is fine for helping to ensure couples’ commitments, but let’s go back to the Neanderthals.

Neanderthals, our closest cousins and sometime-mating partners, died out about 25,000 years ago. Science guesses their population dwindled below reproductive viability. Therefore, breasts became even more important as a goad, as an assurance that the last remaining experiment in hominid life would be successful. Evolution made sure that the urge to procreate would continue to be felt and emphasized with the help of a wired-in fascination with breasts: Men would seek them, women would exploit them to keep that oxytocsin drugging their brains and pleasuring them, which meant a continued surging of Homo babies, ensuring this writer’s presence on his computer.

The size is supposed to matter, says our culture, and celebs and “influencers” and various rappers and “personalities” spend a lot of time and money pumping up their breasts and other body parts, but even a cursory glance at Ancient depictions show that Phryne’s marble and mosaic sisters were not cartoonishly big and the earliest writers mocked as deformed those ladies who were.

Perhaps Evolution went a bit too far and now seems out of control. From the earliest ruttings of primal humans, down to the sirens of the Silver Screen, we see a lot of A and  B cups, but those ladies were the mothers of our civilization and universally acknowledged as beauties, so even though the need for proper bonding and mating re-arranged bodies and minds, culture took control and has run amok. If the theory that breasts were surrogate buttocks, then there is no point anymore.

How to explain all this to Phryne?

If you enjoyed Len Holman’s extended metaphor on Phryne, check out the automachination YouTube channel and the ArtiFact Podcast. Recent episodes include a dissection of Kurt Vonnegut’s classic novel, Galapagos, a philosophical look at kitsch, aesthetics, and NFTs with UK painter Ethan Pinch, and a long discussion of photography from Alfred Stieglitz to Fan Ho and Vivian Maier.

More from Len Holman: Labiaplasty: The Body as Enemy, Vaccine Mandates vs. Carol Doda, The Problem of the Criterion: A Practical Case