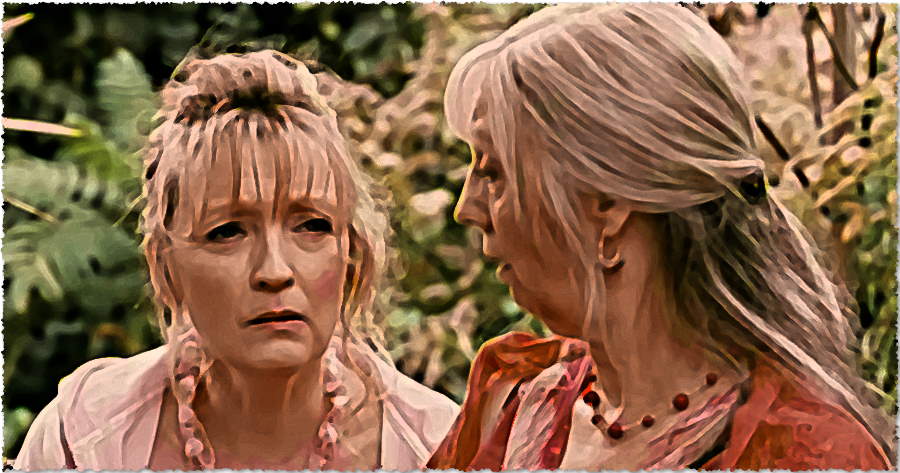 Mike Leigh has placed himself within his own filmic cannon vis-à-vis how well he portrays the lives of ‘ordinary people.’ No particular character is extraordinary, but mostly each navigates through life, often longing for something. We see first hand the weaknesses and flaws with which we can much identify rather than judge. Several of his films are Vera Drake (2004), Life is Sweet (1990), Naked (1993), Career Girls (1997), Happy Go Lucky (2008), Secrets & Lies (1996), among others. Note that none of the titles are outstanding. One could even argue that they’re rather bland. However, just as with Bruce Ario’s poetry, the seeming ‘plain spoken’ language reveals much more beneath.

Set in North London, Another Year involves a happily married couple, Tom and Gerri (Jim Broadbent and Ruth Sheen), wherein their happiness is a seeming anomaly. Mature, kind, and pleasant, they feel like the sort of couple anyone would like to know. Gerri has worked as an emotional counselor for the past 20 years. Tom is a geologist. ‘I dig holes,’ he jokes, one night over dinner. The couple appears to feel at peace within their lives. This is a contrast to some others they know, like Gerri’s coworker, Mary (Leslie Manville) who works as a secretary at the same facility. The two women are friends albeit underneath lurks the hint that Gerri is acting as a big sister to the otherwise emotionally needy and irresponsible Mary. For one, Mary spends too much, drinks too much, and throws herself at the first person willing to listen. Gerri is willing to listen but only to a point. This makes her a good friend, but it is clear that she must set boundaries in order to not be vortexed into Mary’s emotional dramas.

In his review, Roger Ebert describes Mary well: ‘Many people have a friend like Mary: unmarried, not getting any younger, drinking too much, looking for the perfect spouse as a way of holding any real-world relationship at arm’s length.’ Furthermore, Gerri and Tom have a 30-year-old son named Joe that Mary has known for 20 years. He is a successful young lawyer she takes to gently flirting with after having a few drinks. ‘How old do you think I look?’ she asks. He is polite but unresponsive to her advances.

Meanwhile, Gerri and Tom have a friend named Ken who also has his own set of problems—drinks too much, overweight, lonely, and likely to remain ever single. He wears a shirt while chain smoking that says, ‘Drink more, think less.’ Mary sits beside him and also drinks and chain smokes. They sit alone while everyone else has abandoned the table due to their smoke. Ken takes a liking to Mary—he would, of course, enjoy going out with her, but she refuses him. Could she do any better? As Ebert notes, ‘Ken is no prize, but might be happy to date Mary and maybe marry her, and after all, could Mary do any better? She persists in the delusion that she could.’

Trouble ensues when Joe brings home a girlfriend named Katie. She is happy, successful, confident, outgoing, and emotionally well balanced. These are all the things Mary is not. Gerri and Tom take an instant liking to her. Who wouldn’t? Upon meeting Katie, Mary’s mood changes instantly as she snipes with passive-aggressive comments. Mike Leigh handles this well, as Gerri notices it but tries to steer the conversation into another direction. That the middle fifty-something Mary ever thought she stood a chance with the 30-year-old son that she’s known for 20 years is delusional.

Mike Leigh has a gift when it comes to portraying the lonely and desperate. As example, when I watched Naked for the first time, I saw how much that film was influenced not only by Taxi Driver but also After Hours. Johnny, played by Daniel Thewlis, is a loner, but this is more brought on by himself—wherein he actively pushes people away, whereas Travis continually attempts to reach out, yet fails. (Leigh’s Scorsese influence is also evident in Career Girls, where we see a poster of Travis Bickle is on the wall.) Travis, while a character that many of us might not relate to on some day-to-day level (how many drive taxis and are ultimately that lonely and lacking in culture?) is ultimately relatable on an emotional level. The only difference is that most of us can handle this loneliness better.

Mary seems like a decent woman—her neediness, however, is likely to make most want to pull away. Who would want a friend as this? When Tom’s sister-in-law dies, he invites his brother Ronnie to stay for a week. Meanwhile, when Tom and Gerri are out, Mary shows up and invites herself in. She makes herself tea and barrages Ronnie with questions, who delivers one-word answers. Does she have her eyes upon him, now? When she asks if his deceased wife Linda was nice, he sips his tea and does not respond. As for Mary, something has happened, but we get the sense that this sort of emotional tragedy is just another day for her.

In short, Mary seems to be attracted to those men who do not deliver the attention she requires. When Gerri and Tom return home, they seem like they are undergoing their duty. ‘I wish you’d called,’ Gerri tells Mary. Nothing like being passively told you’re not welcome. Sure, they welcome her, but it’s out of their own kindness, as they’d already had their plans. ‘Stay for supper, Mary,’ Gerri insists. ‘We have plenty of food.’

Mary is in need of therapy. ‘I think you need to talk to someone,’ Gerri tells her. While we don’t know what Mary’s specific problems are, she is in desperate need of help, and not any man or circumstance can fix it. Rather, she is someone who has been hurting for a while and just like Ken, she has trouble holding it in. This is likely why he repels her, as too often those who resemble our weaker selves repel us.

Beneath Mike Leigh’s characters are often a hurt, a longing, and a lack with which we can connect. In watching this film for the second time, I will end with a quote from Roger Ebert’s review of Naked: ‘This is a painful movie to watch. But it is also exhilarating, as all good movies are, because we are watching the director and actors venturing beyond any conventional idea of what a modern movie can be about.’

While I didn’t find Naked painful to watch (no more than Taxi Driver), in all of Mike Leigh’s films, I felt enlightened by the fact that Leigh chooses to not turn away from the characters’ suffering. ‘Onward and upward,’ Mary says, when drunk one night. Inside, it has been another year.

If you enjoyed this analysis of Mike Leigh’s Another Year, consider supporting us and get patron-only content on our Patreon page. This will help the growth of this site, the automachination YouTube channel, and the ArtiFact Podcast. Recent episodes include a climate activist’s take on Ted Kaczynski’s Unabomber Manifesto, a discussion with Norman Finkelstein and Palestinian refugees on their memories of war, and a re-examination of James Cameron’s Terminator films.