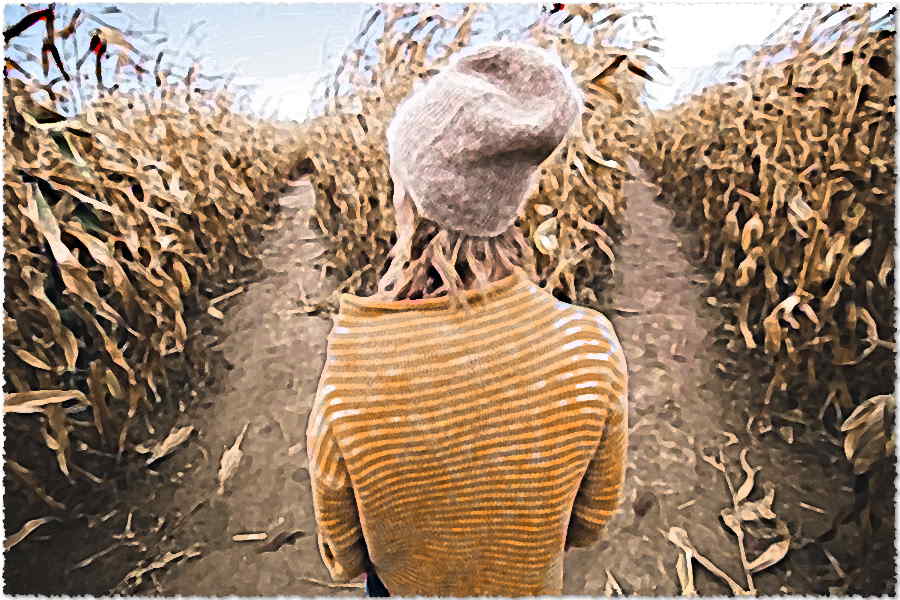 Was there really a time when people had fewer choices, maybe only two? Robert Frost’s poem seems to indicate maybe so. Has the technology outburst created a world out of control? Do we regret this and yearn to go back? Well, we can’t go back. Like the walker, we are pushed to move forward.

This is why the poem is still important. We may face more roads but that doesn’t negate the fact that we must still make a choice. Robert Frost doesn’t even question that a choice must be made. And the truth is that even the most varied and complex choices can be broken down into a series of two choices. There is really something timeless about the duality of human nature, yin and yang, good and evil, and so on. Frost still has something worth hearing here.

But the thrust of the poem does not rest upon consideration of only presenting two roads. Frost could not have predicted, nor did he try, to determine the complex nature of some future world. It doesn’t appear that he deals with this issue at all. Robert Frost is comfortable with two choices, and it is the nature of these choices that the poem turns on.

Frost chose to become a poet, the road less traveled. He shows us exactly how this decision came about. And he shows us with style and panache.

Two roads diverged in a yellow wood,
And sorry I could not travel both
And be one traveler…

He knows he is called upon to make a decision.

Was this self-imposed? Possibly. Some people go through life seemingly never facing decisions, at least not one as poignant or grand as here. On the other hand, it’s inescapable to live a life with no decisions. They say making no decision is still a decision. But Frost is rising to the challenge with clarity and reasoning. There is no hedging the bet.

Yet knowing how way leads to way,
I doubted if I should ever come back.

He is making his decision knowing it probably will be final. We can take heart in his courage and learn what making a decision is all about.

The beauty of the poem is that Frost chooses the less travelled road which makes all the difference. For those of us who march to our own drum, we feel great affinity. But even those who choose more conventional lives can find value in the poem in knowing their decision is a  choice.

That said, this poem is the rallying point for those of us who step out in the wilderness and find their way almost blindly. We can verify our choice by knowing someone as great as Robert Frost did that too. Frost leaves just enough ambiguity to make us feel we made our own choice and were not choosing that lifestyle because Robert Frost told us to.

The level of pride is high. The sense of adventure is high. We have almost no expectations. We choose this course because as only those of us who do so know, we must make that choice. So much the better is we find any reward in it as Frost did. We tell ourselves, success doesn’t matter, but we know that’s a certain amount of BS. We are the mountain climber who says: “because it’s there”.

The definition of this road rendered by Frost is very spare. He doesn’t give us guidance like someone attaining an accounting degree. But we see it nonetheless and know what he’s talking about. Doesn’t make us better than the ones who choose status quo, just different.

Going back to the top of this essay, I can say that this road less travelled is different from the one travelled by Robert Frost. That’s the point. We must summon up our own abilities and skills to traverse this type of road in today’s world. We can embark on this great voyage realizing we are somewhat alone, but that others have faced similar situations.

Indeed this poem was somewhat pivotal in my choice to walk this road of being a writer. I mean who wouldn’t be lured by this? And we can even see how people with the most conventional lives also are a little bit on this path.

But I don’t want to blur the decision we make too much. We make a definite choice. Robert Frost before us made a definite choice. It gives us grounding versus a condition that we just accept the chaos. We almost choose chaos in some ways, or at least a path off the beaten trail.

And it’s really a solo journey which Frost clearly conveys with his subject making the choice in the yellow wood. We don’t hear bells and whistles, we hear the earth and we stay close to it because we must cling to something.

Only two roads? We might even say, for us there’s only one. The rest of the world may well be facing multiple roads, but Robert Frost has gone before us showing us we can choose the one.

I took the one less traveled by,
And that has made all the difference.

No more needs to be said if we are going to carry any sense of pride in our choice. It’s not all about pride though, it’s about everything.

If you enjoyed this analysis of Robert Frost’s “The Road Not Taken”, check out the automachination YouTube channel and the ArtiFact Podcast. Recent episodes include a debunking of Internet sciolists such as Jordan B. Peterson and Christopher Langan, a breakdown of Elizabeth Barrett Browning’s Aurora Leigh, and a long discussion of photography from Alfred Stieglitz to Fan Ho and Vivian Maier.

More from Bruce Ario: Small Group Process: The George Fairweather Way, Jesus Is Born: The Christmas Story As Art, I Want to Make it Big: Analyzing Bob Dylan’s “Blowin’ in the Wind” & “I Contain Multitudes”