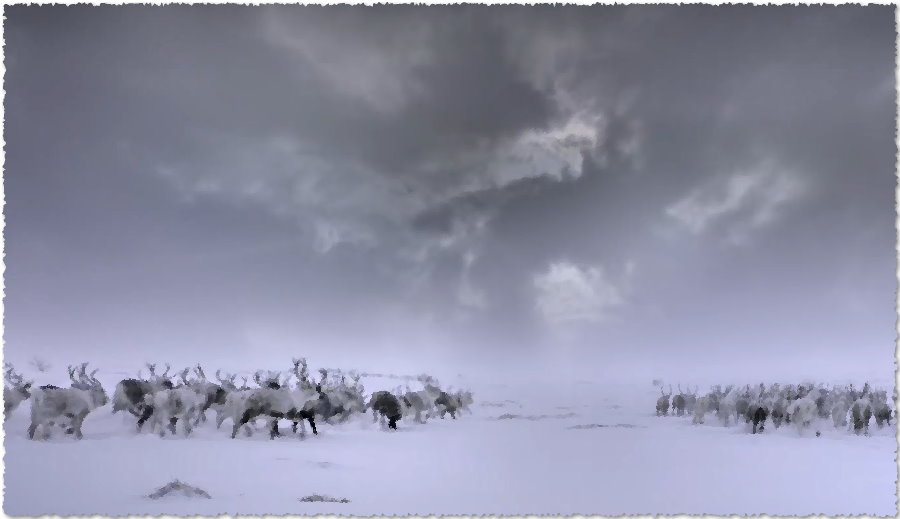 This planet has always been picturesque. Yet, what of the arrival of humans? What have they done to undermine it? One only need watch Michelangelo Antonioni’s Red Desert to see. From factory to industry, we’ve made this world harsh, uninviting. Not to mention our impact upon global warming. As example, Central Texas recently had the highest number of tornadoes reported in a single afternoon. Outside, the air was thick and too warm for March. We know how it got this way, but more importantly, where will it continue?

Les Saisons is not quite a documentary, but more so an observational narrative. Directed by Jacques Perrin and Jacques Cluzaud, this is the film for one who wishes to listen and observe. As example, the opening scene is that of the brutal cold, presumably during the Ice Age. We are given shots of bison that remain tenacious, yet partly frozen. They cower within their self-made corner in an attempt to create heat, whilst the wind overruns them mercilessly. ‘Winter has lasted 80,000 years,’ the narrator says. ‘In such hostile conditions, animals resist the freezing cold. Over this great expanse, traces of man are scarce.’ Then, we see an intricate pile of rocks that only humans could have made, which serves as a landing place for some owl.

This is the poetry herein—the imagery and what, exactly, to imbue into it. As example, we are shown what a shift in a few degrees can do. Glaciers melt and fall, whilst trees grow fruit. How much does climate decide what grows within some small space? Make no mistake. Les Saisons is not a film about global warming or anything political. Instead, we are presented with the passage of time, the birth and rebirth of species, and what can happen within some frost laden (or sun laden) realm. Much like Karel Zemen’s Journey to the Beginning of Time (1955), we are witness to this instructional narrative that not only invites but also educates. And on top of that, it is just plain pretty and peaceful to watch. (The same can be said for Les Saisons.)

Jacques Perrin and Jacques Cluzaud are the same creators who bought us Winged Migration (2004). In it, we are shown the vast territory from where a diversity of birds takes flight. In fact, if I recall correctly, the film inspired my poem, ‘Telling the Nightingales,’ which ends:

…Magnetic yearn
mimics that northern place, starting. There it takes
off, stream-line, enables whatever fuels
their feathered game. When too much invention
takes time to make flight, this field cues and pulls
each attached in one undamaged direction.

There is not much to summarize within Les Saisons, but I will say that the film does a clever job of utilizing humans throughout the generations. In one scene, we are presented with ancient Homo sapiens, to that of the Middle Ages and then more recently. In fact, the ending consists of a beautiful scene where a young girl is witness to a mother and her baby doe. The scene evokes true pathos, as the young deer are presented with a forest now sparse due to human logging. Most all has been gutted. As result, there is little food to forage. Innocently, the deer look on, accepting their fate.

Those unfamiliar with my work might be surprised to learn that I graduated with a biology major. At the time, I believe my decision was much influenced by the documentaries of Sir David Attenborough, as I would watch, and a sheath of peace would overwhelm me. Not just that, however, but I was impressed by the natural world. I longed to learn topics that would be relevant in my own country to that of Bangladesh, Chad or Portugal. (Accounting, banking and legalese don’t apply existentially.) So in other words, my motivations were Romantically inclined. I imagined myself doing much of the same within this film, wherein I would go and watch and record and learn all in the name of art. Films as Les Saisons only add to the Romance.

As the earth tilts, more sun is allotted unto that particular place, thus causing melting. As result, Europe is overgrown with a ‘sea of greenery’ and thus, forests thrive. Large cats wrestle their young whilst bears climb trees. A moose opens its wide mouth and grunts. When the fledglings drop from the trees, they will fly inevitably. ‘Under man’s growing influence, the wilderness shrinks,’ the narrator remarks. And within the film, we witness this repeatedly.

In my experience, I grew up gravitating towards certain parts of nature, only to reject it later. And it was never due to the land per se, but the lifestyle and culture—all brought about by humans. South Florida is my example. Imagine growing up in the southern tip of this peninsula, only to then be inundated with tourists come spring break. During that time, the beaches were impossible to pass. Not a spot of sand was free. Parking, I imagine, was impossible (I was too young to drive) but also finding a place to land—like the owl, proved pointless. And even if one could, the ocean would be too overrun anyway. Bodies, everywhere. Bars, nightclubs, and pale, flabby northerners. All this ruined my Florida image. Alas, when trends begin, nature dies.

I can’t say much more about Jacques Perrin’s and Jacques Cluzaud’s Les Saisons without recommending that you watch it. A wonderful experience, many ideas are to also be gleaned from it. One of my favorite poets is Robinson Jeffers. He often wrote about nature, albeit in a more alienating, anti-human sort of way. (In fact, I could imagine his irritation that cameras were present within the filming.) Not that he wouldn’t enjoy this film per se, but that humans even intervened at all—this would piss him off. So, I shall end this then with one of his poems. It is a poem of nature, of love, but most importantly, the love of nature. The much-needed respect. If there is one message that this film offers, it is to honor your fellow neighbor. Bison, deer, owl, cheetah, moose, lion, hawk, bear, otter, swan. Honor all. This is every bit their world. In fact, they were here first. Love the Wild Swan:

“I hate my verses, every line, every word.
Oh pale and brittle pencils ever to try
One grass-blade’s curve, or the throat of one bird
That clings to twig, ruffled against white sky.
Oh cracked and twilight mirrors ever to catch
One color, one glinting
Hash, of the splendor of things.
Unlucky hunter, oh bullets of wax,
The lion beauty, the wild-swan wings, the storm of the wings.”
—This wild swan of a world is no hunter’s game.
Better bullets than yours would miss the white breast
Better mirrors than yours would crack in the flame.
Does it matter whether you hate your . . . self?
At least Love your eyes that can see, your mind that can
Hear the music, the thunder of the wings. Love the wild swan.

If you enjoyed this review of Jacques Perrin’s and Jacques Cluzaud’s Les Saisons, consider supporting us and get patron-only content on our Patreon page. This will help the growth of this site, the automachination YouTube channel, and the ArtiFact Podcast. Recent episodes include a comparison between Thomas Pynchon’s Gravity’s Rainbow and Kurt Vonnegut’s Slaughterhouse-Five, a survey of photography from Josef Sudek to Laura Makabresku, and a discussion of Hermann Hesse’s classic novel, Steppenwolf.

More from Jessica Schneider: The Quest For Control Within Michael Haneke’s “The Piano Teacher” (2001), Hours & Sound: On “A Man Escaped” by Robert Bresson (1956), Morning’s Consequence: Elaine May’s “Mikey and Nicky” (1976)