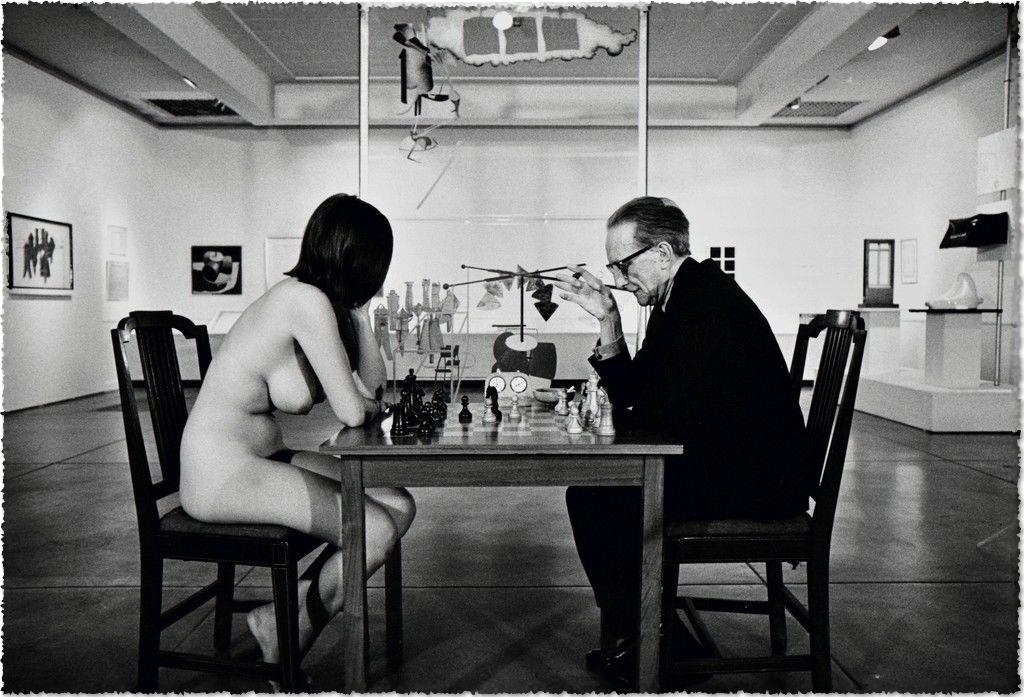 This is a picture of Eve Babitz playing chess with Marcel Duchamp (she’s the one with no clothes) in the Pasadena Art Museum ( now the Norton Simon Museum).  She was a 20 year-old L.A. community college student in 1963, already a prominent player in the Hollywood, glamour, party scene.  He was, well, he was 76 year-old Marcel Duchamp—the man who painted the amazing, kinetic “Nude Descending A Staircase” (1912), the man who placed a urinal in an art exhibit, the man who put a mustache on the Mona Lisa with the title, L.H.O.O.Q., which, when said quickly, and the French letters are said phonetically, sounds like “Elle a chaud au cul” (“she has a hot ass”  or “hot in the ass”, a French vulgarism referring to a woman’s prediliction for sexual adventurism).  Duchamp was very fond of puns and wordplay and this is one which has been living in infamy for a long time.  He was considered, along with Matisse and Picasso, as one of the three artists who helped define the revevolutionary developments in the plastic arts at the beginning of the Twentieth Century.

Eve Babitz was very fond of, apparently, everything.  She referred to her lifesyle more than once as “over-boogie.’  If you saw  the movie “Boogie Nights” you have a small ideas of her larger life. She lived hard and fast, from a smouldering kiss, at 14 years of age, from Johnny Stompanato (an “afilliate” of the Cohen crime family in Los Angeles, and before he was stabbed to death by Lana Turner’s daughter) in  in his car, to Jim Morrison of The Doors, to Harrison Ford, to Steve Martin (to whom she suggested that famous white suit), to many others.  But she wasn’t just a party girl with a wild and restless spirit, but an accomplished author, with a sharp eye and felicitous writing style of fiction and non-fiction (I loved her “Slow Days, Fast Company”). Her  millieu was the 60s and 70s in L.A., Hollywood, and vicinity—here was Igor Stravinsky’s goddaughter hobnobbing with the glitterati and having a grand old time—her very own, willful time.  In her Introduction to her wonderful essays, “I used to Be Charming,” there is this quote at the top of the first page:

And because we were in Southern California—in Hollywood even—there was no history for us. There were no books or traditions telling us how we could turn out or what anything meant.

For Babitz, there was a clear landscape, a world of possibilities to shape as one wished, as one could, and damn the “way things are; damn the way things are supposed to be” and this independence of thought and willingness to follow one’s own path sounds very much like a certain French pioneer artist.

Marcel Duchamp was born almost 60 years earlier than Eve Babitz—two generations and a half a world apart—and had that same spirit of insistence on walking his own path.  As a painter, he was more interested in the mind than the eye, dismissing the work of Matisse, for example, as “retinal” art.  His conceptual art was filled with wordplay, figures in wood and metal intended as language for the viewer to decipher and, hopefully, ponder and enjoy.  In 1921, Rrose Sélavy emerged.  She was a pseudonym for Duchamp, photographed by Man Ray.  The name may be pronounced “Eros, c’est la vie” (Eros, such is life) or “ arrséoser la vie” (to make a toast to life). Yes, he delighted in all that tricky verbiage.  Rrose Sélavy may be Marcel Duchamp’s way of warning us about romanticizing and pedestalizing artists (which today, is quite common—so much for heeding Duchamp).  He was the one who suggested to Alexander Calder that he name his kinetic works “mobiles” which name has remained floating and spinning through history for these kinds of works. He mostly abandoned art for chess, but his artistic sensibilities remained intact: “I have come to the personal conclusion that while all artists are not chess players, all chess players are artists.”

Babitz was a big-bosomed, tall, inquisitive, gulper of life. She drank to excess and took many and varied drugs just for the hell of it; she was a defier of social convention and was dismissive of obvious mores.  Her writing is free, insightful, filled with wonderful asides informed by her own amazing life.  She was mindful of the image she presented, mindful of her body’s affect on men, but if one got past the big rack, one found a big brain, wit, and scalpel-like commentary.  (One piece of hers, from the April 1976 issue of Ms. Magazine is pretty damn wonderful:  “My life in a 36DD Bra, or, The All-American Obsession”). She was an historian of a certain era, a certain milieu, a particular was of viewing the world and living in it.

It’s not usual for the human race to produce rare, skilled, larger-than-life persons and personalities. It’s even less usual to ever meet one.  And even less is it usual for one of these interesting people to meet another one of this select group.  But here, we have graphic evidence of just such a marvelous meeting. At this point the reader must be saying something like, “But this is Marcel Duchamp, one of the most influential, consequential, luminaries the art world has ever seen, and some wild party girl who scribbles about Hollywood and her misspent youth.”

Where is it written (except in the minds of snobs, experts, and those who follow what the received wisdom says is good, true and correct) that genius, expertise, wonderful insightfulness—greatness, in fact—is only for the people in Wikipedia with oodles of pages?  Both Marcel Duchamp and Eve Babitz were observers, commentators each within his and her own context.  Genius, insight, innovation, all come in many flavors and there is no one way to be a genius.  Cleopatra was a genius in her own way.  Despite what may be said of her physical person, she had a charismatic way about her—of seduction, of making sure her country stayed safe and whole, and making sure it prospered.  Anyone who has gone to the DMV knows how rare that indefinable Something is which makes human interaction so sweet, so productive, so sexy.  Cleo had it; DMV folks seem not to.  It may be sexist to say in this hashtag era, but the lothario who sweet talks his target into the sack has his own genius, as well as the lady who can painlessly drain her lover’s or husband’s bank account while he’s smiling all the while. In fact, genius is everywhere if one only spends some thoughtful time to look.

So let’s examine the photo to see how amazing, how semiotically wonderful this meeting was.  First, the obvious:  One of the figures is nude, one is not.  The chess pieces are in black and white.  One figure is quite large, one is small, almost delicate.  There is youth facing age. A total clash of differences, it seems, yet the main elements complement one another.  This isn’t just a mildly salacious photo, it’s a meeting of minds in common, a meeting of personalities joined in spirit.  There they sit, two beauties playing chess.  Marvelous.