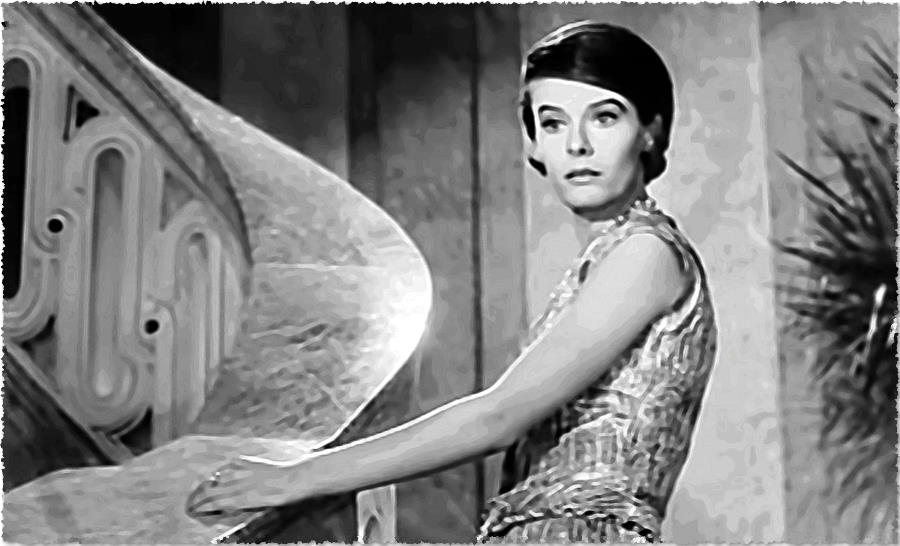 The tale takes place at a French chateau, where people move about quietly or they don’t move at all. Decorative ceilings are every bit as intricate as they are distant. Outside, the landscaping is so perfect that from a distance the humans look like trees, or vice versa. And this is where the separation exists. It is not merely humans, but ‘the’ humans that populate this film. We witness them, barely moving as they stand around. They appear rich, elegant, and suffering from an eternal ennui. No one has a name. If an alien were to watch, it might believe that this is what humans are like—disengaged and preoccupied with the past. The narrator gives a clue, as he speaks in a low murmur in second person. But to whom is he speaking?

‘…Silent rooms where one’s footsteps are absorbed by carpets so thick, so heavy, that no sound reaches one’s ear, as if the very ear of him walks on… once again along those corridors, through these salons and galleries in this edifice of a bygone era, this sprawling, sumptuous, baroque, gloomy hotel, where one endless corridor follows another, silent empty corridors, heavy with cold, dark woodwork, stucco, moulded panelling, marble, black mirrors, dark-toned portraits, columns, sculpted door-frames, rows of doorways, galleries, side corridors, that in turn lead to empty salons, salons heavy with ornamentation of a bygone era…as if the ground were still sand or gravel or flagstones over which I walked once again…as if in search of you between walls laden with woodwork…’

Note the repetition in wording. He is speaking as though someone is listening, albeit we do not know who that someone is. Here, life has been reduced to a whisper, a murmur, and a memory that one cannot remember. Is this his attempt at recollection? The film contains a simple story where a man claims to have met a woman a year earlier. They shared a romance, he says, and she agreed to meet him a year later. Now, that time has elapsed. He pushes himself onto her, and yet still she continues to not remember their supposed time together. Characters do not have names—rather, much like within Tarkovsky’s film Stalker, they instead serve to represent something more than merely themselves. As example, the Woman (played by Delphine Seyrig) is named A, the First Man (Giorgio Albertazzi) is named X, and the Second Man (Sacha Pitoëff) is named M. M might be her husband, but this is never made clear. He clearly has influence over her, however. The men engage in a game called Nim. It utilizes matchsticks and M always wins. ‘If you can’t lose, then it is no game,’ M is told. ‘I can lose, I just always win,’ he replies.

There are many words to describe this film, but haunting and ethereal might be the two best. It’s not that we believe that these humans are inside some sort of heaven or hell, but rather that time seems to stop, now that it is one year later. It is without question that Stanley Kubrick studied this film before directing The Shining. Not just for the obvious setting, but that both films involve the use of ghosts. The Shining, of course, is more literal in that use and Last Year at Marienbad is more metaphorical. In his review, Roger Ebert aligns the film to that of 2001: A Space Odyssey, wherein the bedroom shares a striking resemblance: ‘That the three characters would move forever through their dance of desire and denial, and that their clothing and the elegant architecture of the chateau was as real as the bedroom at the end of “2001: A Space Odyssey” – in other words, simply a setting in which human behavior could be observed.’

There are moments amid the narration that make viewers feel like the hotel itself is speaking, as though we are merely witnesses to someone’s subconscious, whilst the humans stand statuesque, waiting around for nothing in particular. What purpose do they serve? Are they merely ornamental? Perhaps this is the dilemma that many have with this film—that we don’t know their full story and nor do we need to. In fact, the film succeeds because we don’t know. When X pushes himself onto A, she rejects him. He shows her a photograph, which she does not remember. ‘Tell me how our story continues,’ she says. She is as distant and detached as those around her in this frozen garden. Conversations feel forced, void—a perfunctory process. Then, one only need recall the opening narrative: ‘…silent rooms where one’s footsteps are absorbed by carpets so thick, so heavy, that no sound reaches one’s ear, as if the very ear of him walks on…’ Here, the humans appear as bystanders within their own lives. It is a silent life, brought on by hushed carpeting and murmurs that insist there is something to be found. The ceilings are beautiful and carved with intricate detail. From our low place, we cannot help but to admire them.

Last Year at Marienbad shares a similarity to the films of Michelangelo Antonioni. Films like La Notte, L’Eclisse, and Red Desert all involve characters who are cut off from themselves. And because of this, they forget how to understand others. We can look at anything from a distance and it will appear beautiful. Memories are there for this reason—we can look on with familiarity and rearrange the detail to serve us. Or we can choose to forget, as the past dwindles to residue. Distance is not cold but indifferent. It removes the grit and dirt from our minds and leaves what we wish. Was X inventing this affair? He is, after all, a gifted storyteller.

There is something otherworldly when we witness humans from a distance. By doing so, we never involve ourselves into their messy lives and instead they share more semblance to trees than sentient beings. In one scene, we are presented with the statue in Frederiksbad’s Garden. The statue consists of a man and a woman who bring with them two interpretations. X believes that the man sees danger and is attempting to prevent the woman from moving forward. A believes that it is the woman who sees something. Both versions are correct. ‘They could easily be either of us…or anyone,’ he says. A does not remember what X recalls in detail. Even the way she stood, with her hand to one side, alone, one year earlier. He remembers all this. He is this world’s narrator. Witness the dream.

If you enjoyed this review of Alain Resnais’s Last Year at Marienbad, consider supporting us and get patron-only content on our Patreon page. This will help the growth of this site, the automachination YouTube channel, and the ArtiFact Podcast. Recent episodes include a comparison between Thomas Pynchon’s Gravity’s Rainbow and Kurt Vonnegut’s Slaughterhouse-Five, a survey of photography from Josef Sudek to Laura Makabresku, and a discussion of Hermann Hesse’s classic novel, Steppenwolf.