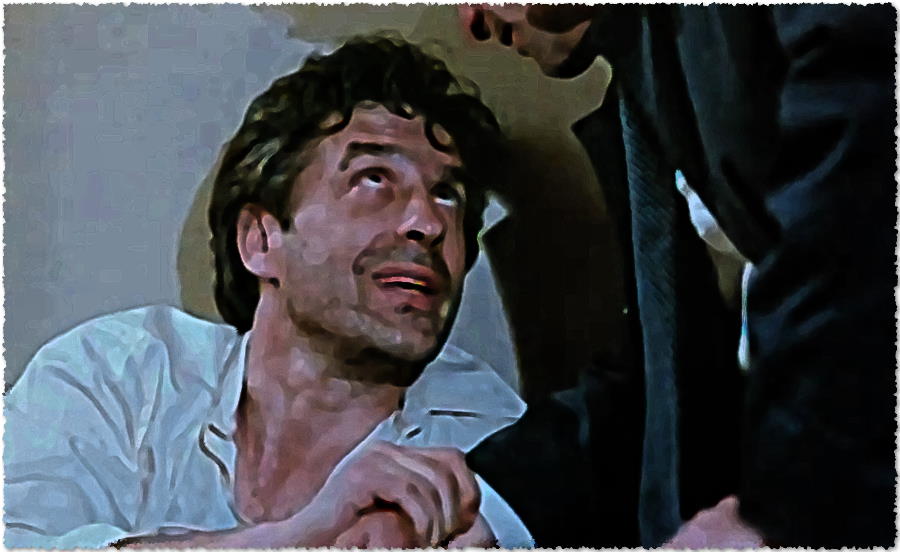 Nicky (John Cassavetes) is a low-level gangster who has stolen money from his mob boss. As result, he is now held up in a grimy hotel room on the edge of town, in an attempt to evade capture or even death. Mikey (Peter Falk) is Nicky’s childhood friend. In a moment of need, Nicky calls Mikey up in the hopes that maybe his friend might be able to offer a hand, or even get him out of trouble. Mikey thinks that Nicky should leave town, but events and distractions unfold and that doesn’t happen. Nicky is suffering from a stomach ulcer and so Mikey goes to retrieve some creamer from a diner, but not before erupting into a rage at the cashier. Rage is a recurring theme throughout the film, as it often manifests as one’s temper. But it goes further than this. Neither man knows how to function in life. They wander and they exist. They blow up when things don’t go their way, and then there are the women who sit at home. Not necessarily waiting for them, but more so telling them to leave when the men shove their way in. Both Mikey and Nicky have wives and they both cheat. They are mooches who come and go. Mikey seems to be better off, but not by much.

We learn from Mikey that his brother died at age ten. ‘Don’t you wish your mother was still alive?’ the men ask one another, while wandering a cemetery in the middle of the night. Admittedly, they both do wish for their mothers. They share childhood memories and Nicky laughs at inappropriate times. Gone is the sentiment. The men talk and talk and talk—a lot, but it works. Nicky is suspicious of everyone, including Mikey. And he has good reason, as there is a hitman (played by Ned Beatty) who is after him. Yet maybe—if Nicky plays it smart—he might evade all of that. But neither Nicky or Mikey is very smart.

Conflict ensues when they visit the home of Nellie, a hooker played by Carol Grace. Nicky pushes himself onto her and despite her hesitation, she relents. Afterwards, Mikey attempts the same, but she bites him when he goes to kiss her. The men have no problem slapping women. ‘She’ll sleep with anyone but me,’ Mikey erupts. Nicky reacts and pulls at Mikey’s watch and breaks it. ‘My father gave that to me 20 years ago,’ Mikey informs. But Nicky doesn’t care. That Elaine May has this film take place across a single night, only to then have the one means of measuring time literally break apart, is a poetic element. They were childhood friends, but what holds them now? They don’t seem to get along, and if anything, they don’t seem good for one another. Yet neither is self-reflective enough to realize this, and instead their egos motivate. At one moment, the two begin to kick the shit out of one another, only to then hastily kybosh the friendship. Nicky then wanders the streets and uncovers his wife staying at her mother’s. Once again, he pushes himself in. She claims to hate him and that she doesn’t care about him, but really she does. Nicky sees his daughter for a moment but she doesn’t take to him. ‘She won’t hold my thumb,’ he says.

Many have labeled this a crime film, a noir. But this isn’t really a film about the crime. Yes, the crime motivates, but this is more so a film about friendship gone sour. Or has it? There is a sense that the two have been arguing like this for years. Repeatedly, they are rejected by those who are closest to them and for good reason. Has either allowed himself to get close to anyone? Perhaps the reason they don’t get along is that they are too much alike. Likewise, the two have come to depend on another—their friendship is the only solid thing that remains.

I was first introduced to this film via the Criterion Channel. Not only was it spotlighted in the early days of the Channel’s release, but continually Elaine May is featured among other noteworthy women directors that include Larisa Shepitko, Kelly Reichardt, Dorothy Arzner, Agnes Varda, and Jane Campion. To give a sense of what May was up against, in Kim Hendrickson’s essay titled ‘10 Things I Learned: Mikey and Nicky’, Hendrickson notes: ‘Director Elaine May was only the third woman to be admitted to the Directors Guild of America. Three decades earlier, in the 1930s, Dorothy Arzner was inducted as the DGA’s first female director; Ida Lupino followed, but not until the fifties.’

May claims that she based this film on gangsters that she knew in real life. Given the realism of the dialogue, I believe it. And as any cinephile knows, Cassavetes and Falk are no strangers. The two carry an on-screen chemistry that allows us to feel that we’ve known them throughout their lives. Similar to John Cassavetes’s own films, the script is both loose and meticulous. After all, it takes a certain skill to make something seem like it is unfolding before us, without even trying. What we don’t see, however, is all the labor that goes on behind the scenes.

The 1970s certainly resulted in influential films. Taxi Driver was made in the same year and the influence of Martin Scorsese’s classic cannot go denied. Although Taxi Driver doesn’t take place during a single night, it feels like it should. Each night is the same, according to Travis Bickle. Likewise can be said for the narrative within Mikey and Nicky—and that these events manifest throughout one night doesn’t matter, as this could be any night. Cull from their lives any event and the crime, the rage, the contempt—all will still be there. Mikey and Nicky premiered in its day with favorable mentions, but then the film fell away. Yet, since its resurrection, reviews have been positive, wherein words like classic and masterpiece get thrown around. Shame that this rarely seems to happen in its era. (Quality art needs time to appreciate.)

The ending of Mikey and Nicky should come as no surprise. It is stark and abrupt and it does not hesitate. In more contemporary films, we might expect some crisper resolution. Hollywood is notorious for conditioning audiences to expect this. Indeed, Nicky gets what is coming to him and in his own way, so does Mikey. It’s just that the credits roll before we get to see it. The rest remains as morning’s consequence.

If you enjoyed this review of Elaine May’s Mikey and Nicky, consider supporting us and get patron-only content on our Patreon page. This will help the growth of this site, the automachination YouTube channel, and the ArtiFact Podcast. Recent episodes include a survey of photography from Josef Sudek to Laura Makabresku, an examination of Abstract Expressionism as depicted in Kurt Vonnegut’s Bluebeard, and a discussion of Hermann Hesse’s classic novel, Steppenwolf.