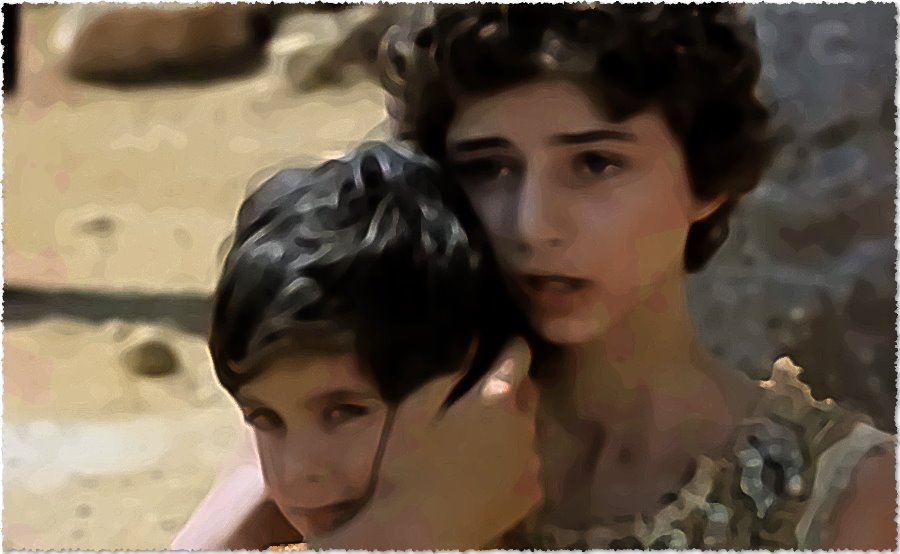 Although Michael Cacoyannis’s Iphigenia bases itself on Greek myth, the filmmaker’s manner is one of unusual realism. Amid the sweat and grime of the characters, the stakes of Euripides’s tragedy (Iphigenia at Aulis) become more relatable, and the fantastic elements of the drama take on a certain ambiguity. Even though a large portion of the narrative is set in motion by “The Gods”, these are never seen onscreen. While this absence is also a factor in the play the film adapts, the director’s grounded approach makes the viewer prone to consider whether these entities are actually real or the result of mass delusion. Suddenly, what was merely an exploration of fate in the original piece also becomes a commentary on the way beliefs gain power through belief. This is one of the many ways through which Michael Cacoyannis revitalizes the largely outdated melodrama.

The story takes place on the shores of Aulis. The abduction of Helen has sparked hate for the Trojans, and the Greek armies wait to sail to war. From the start, the filmmaker presents his audience with the sort of images that sets this adaptation apart from most takes on ancient Greek culture. We see the soldiers as they lay on the sand, bathe by the surf, and fight among themselves for food, and there is an unrefined quality to the goings-on that reminds one of the eye-level realism Werner Herzog employs in his best films. By the time the sequence ends, it is easy for the viewer to believe that the Greek armies once stood by this coast, waiting for the winds to blow.

The central conflict arises when the soldiers accidentally slay Artemis’s sacred deer. The goddess punishes their king, Agamemnon (Costa Kazakos), demanding that he offers the sacrifice of his daughter (Iphigenia, in an outstanding performance by Tatiana Papamoschou) in exchange for the sailing of his fleet. One should note that this message is delivered by Calchas (Dimitris Aronis), the high priest of the temple where the murder was committed, and not by supernatural means. Is Calchas actually delivering the goddess’s message, trying to compromise Agamemnon’s reign, or deluding himself and others? We never know, but these questions remain in the background, allowing Michael Cacoyannis to play with deeper themes, and placing the mind of the audience in the same mental state that Agamemnon must be in after receiving the news.

When Agamemnon listens to the goddess’s demands, he is furious. However, after he hears the Greek troops cheering him on, he is overpowered by pride and proceeds to write a letter asking his wife to send their daughter to marry Achilles (Panos Mihalopoulos). We only see a close-up of Agamemnon as he hears the armies sing for him, but that is enough for the viewer to notice his expression slightly shift from confusion to conceit. The subtlety of the scene makes this bit of characterization more memorable than anything in the original text.

Other ways through which Michael Cacoyannis enlivens his source material are by eliminating the Greek chorus and including characters like Calchas and Odysseus (Christos Tsagas). The latter becomes an intriguing addition, as he is always there to remind Agamemnon of his “kingly duties,” even when that means murdering his daughter. It is evident that he does so to endanger the king’s position and gain a better standing among the masses. The Odyssey’s hero is no longer framed as a hero but as a political opportunist. In Michael Cacoyannis’s iteration, there are no heroes and villains, only interests clashing against each other and trampling over innocents while doing so. This nuance might already be present in the original play, as even though Odysseus is absent, he is often mentioned by other characters. Still, the activity his character has in this version makes the complexity harder to overlook.

After sending for his daughter, Agamemnon has second thoughts and decides to warn Clytemnestra of the truth, only to receive notice of her arrival. Thus the future of Iphigenia is sealed, as, even if her father decides not to sacrifice her, the nearby, bloodthirsty army will take care of the matter. Throughout the film, we see characters take a stance, change their mind, and change their mind again, while the narrative advances in its initial direction. Because of this endless dilly-dallying (most of which does not have any consequence in the end), one would be tempted to claim this story is about the lack of control these people have over their fate. But while this might be true for the original play, it would be more accurate to argue that the film primarily deals with humanity’s self-absorption. After all, it is not certain whether divine forces kickstart this chain of events or not. However, it is undeniable that this same chain of events is sustained by Agamemnon’s lack of control over his ego, Odysseus’s political machinations, and the viciousness of the Achaean mob. Michael Cacoyannis’s Iphigenia is a tale of small men, but not in the sense most people might think it is. It does not present us with a cast of characters whose fate is subject to the fancy of some greater entity. Instead, it frames an ensemble of characters unnecessarily driven to extremes because of their ideas or insecurities.

Eventually, Clytemnestra discovers the real reason her husband sent for their daughter. When she confronts the king by asking him to confess, the camera frames her infant son, Orestes, listening in the background. One can tell this memory will shape the boy as he grows up, and in this manner, Michael Cacoyannis remains committed not only to the realism of the film but also to its central themes. The rest of the film unfolds similarly, as only a few try to save the girl until she ends up accepting her future. Under Cacoyannis’s direction, there is an archetypal element to the narrative that becomes much more evident. Watching it, one wonders: how many Iphigenias, throughout history, have been unfairly crushed by a majority?

Art ages. What was great a thousand years ago is, most likely, not so great now. For instance, although a writer like Shakespeare is almost universally held as a gold standard, and although many of his best plays still possess a lot of power, he does not have the realism and complexity that the best playwrights of the twentieth century have. This is why it is so impressive to see Michael Cacoyannis take an ancient text and elevate it into something that is not just good but great by modern standards. In this way, Cacoyannis is an archeologist of ancient drama, scrubbing off the outdated aspects of this classic and imbuing depth into an otherwise too obvious story. Because of this, his work should be similarly preserved and examined.

If you enjoyed this review of Michael Cacoyannis’s Iphigenia, check out the automachination YouTube channel and the ArtiFact Podcast. Recent episodes include a dissection of Kurt Vonnegut’s classic novel, Galapagos, a philosophical look at kitsch, aesthetics, and NFTs with UK painter Ethan Pinch, and a long discussion of photography from Alfred Stieglitz to Fan Ho and Vivian Maier.

More from Gabriel Massó: On Todd Phillips’s “Joker” (2019): Laughable, Yet Humorless, Jack London’s “The Call Of The Wild”: The Power Of Things As They Are, Dissecting Chanbara: The Evolution of the Samurai Film Genre