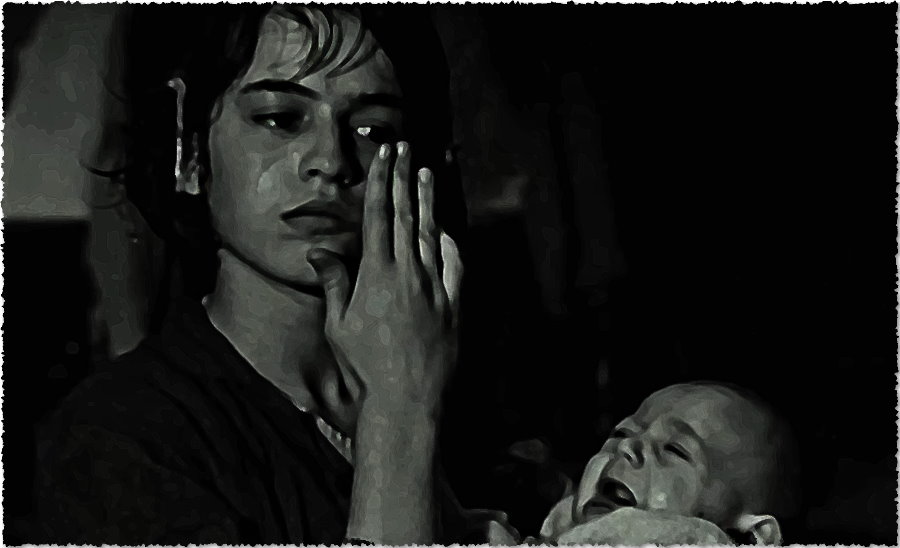 Mouchette tells the tale of a poverty-stricken girl (played by Nadine Nortier)  living in rural France. Her mother is dying. Her father is an alcoholic. She walks to school looking slovenly in her mismatched clogs. Her hair is greasy and unkempt—forced into loose pigtails. Her classmates are indifferent towards her and her teacher is cruel, as she shames the poor girl in front of the class for not singing. Mouchette begins crying. Her teacher doesn’t think to ask how she is doing.

Home life is even worse, where Mouchette’s mother is laid up in bed, weak within dirty blankets. Her baby brother has no crib and sleeps on a dirty mat. Her father is a neglectful alcoholic. Today, this would warrant a visit from Child Protective Services, as Mouchette is in no condition to take on these burdens herself. Instead, villagers turn their eyes, treating the young girl with indifference at first, and then cruelly.

Perhaps the only kind moment Mouchette experiences is when she rides bumper cars and a young man gently flirts with her by bumping into her car. She smiles. Afterwards, she approaches him, but her father ruins it when he rushes up and smacks her face. Can she not have a moment that is hers? Must she be punished for her curiosity? Must every moment belong to someone else?

The film begins with Mouchette’s mother speaking from a chair—what will they do once I am gone? she asks. The scene is spare and is reminiscent of Robert Bresson’s 1962 film The Trial of Joan of Arc in its minimal use of props. While at school, Mouchette hides in the grass and throws clods of dirt at her classmates. While a victim of her circumstance, she’s not going to go down without a fight. One night, after school, there is a storm and Mouchette takes shelter within some trees. She is approached by a man who invites her into his barn. He seems kind at first, but even he wants something. He forces himself upon her. She is drenched—pools of water drip from her shoes, and her socks are soaked. Afterwards, she returns home and attends to her mother and her baby brother, as she wipes her eyes with his clean diaper. She goes to bed wearing the same wet clothes.

One might wonder what is the purpose of living? Why must life be filled with such endless suffering? Her mother, before death, asks for some gin. ‘If I am to die, then I at least want it to be painless,’ she says. Mouchette holds the bottle to her mother’s lips and then fills the misplaced volume with tap water. By morning, her mother has died. Her father mutters something about his wife having been a good woman. He offers his daughter no comfort, and the scene is handled as any other. Perfunctorily, Mouchette leaves to acquire milk for the baby.

Onward, Mouchette undergoes more cruelty. Neighbors see her and call her a ‘hussy.’ The boys who flashed her earlier refer to her as ‘rat-face.’ One woman invites her in for some coffee, but then calls her a ‘little slut,’ as she eyes Mouchette with judgmental contempt. The woman knows that Mouchette’s mother has just died but she doesn’t care. Has no one any empathy? An old undertaker offers her some dresses. ‘I love the dead. I understand them. At your age, they frightened me. Now I talk to them, and they answer me with a murmur, a sigh. And you, Mouchette, do you ever think about death? Are you asleep? Your heart’s asleep. Don’t wake it too fast. You have time enough,’ she says. Mouchette accepts the dresses but not before insulting the woman. ‘You disgusting old thing,’ she says, while wiping her feet on her rug. ‘I am trying to help and you are being mean,’ the woman replies. But is she helping really? She is aloof, cold. There is no warmth to be found in this village. Does this woman really care what happens to Mouchette or is she merely trying to preen her own sense of superiority?

Everywhere Mouchette turns is filled with rejection. Those trying to ‘help’ are only acting out their fake empathy through pity. They don’t really care—Mouchette actually repulses them. ‘You still stink of gin,’ she is told. Upon leaving the undertaker’s house, Mouchette walks amid an otherwise seemingly peaceful street, until she approaches a creek. The dress then gets caught on a weed and rips. She puts it on, and rolls down the hill several times until she eventually falls into the water. Returning to her mother’s words regarding death, Mouchette must think—this is the one way I can finally claim my life—and death—as my own doing. Painless. There is no sentimentality here. No tears. We can almost imagine her thinking, ‘If I can’t acquire it in life, then I will at least get it in death.’

As Robert Bresson noted, Mouchette is everywhere. ‘She is found everywhere: wars, concentration camps, tortures, assassinations,’ he said. Or we have seen her in everyday towns and villages. Dear reader, might I ask how you treat someone who is in no position to benefit you? Are you only nice to her because she poses no threat, and in turn, enforces your own superiority? Or do you genuinely care? Do you regard her as your equal? The film, while morose, does not overwhelm the viewer. There remains a detached quality—void of the mawkish and maudlin tactics that normally thrust viewers into tears. Instead, Bresson forces no sentiment. Much like his 1956 film A Man Escaped, scenes transpire as is, and it is only we who give meaning to this otherwise indifferent human universe.

Mouchette shows herself to have, beneath the neglect, a strong resolve. She has pride. It is evidenced when she throws dirt at her classmates, when she claims that her rapist is also her lover, and when she wipes her feet on the undertaker’s rug. Ultimately, it is she who decides. Bresson clearly had a fondness for those who went overlooked—for those who suffer. In religion, many claim that suffering is the path to salvation, but we still ask the question: what is it all for?

Had Mouchette merely been offered one genuine helpful hand, perhaps she would not have chosen to die. But given her pride, might she have welcomed it? Or does her suffering become just another identity? Growing up, I knew a girl like this. Her name was Patty. Thinking back, I wish I’d been nicer.

If you enjoyed this review of Robert Bresson’s “Mouchette”, consider supporting us and get patron-only content on our Patreon page. This will help the growth of this site, the automachination YouTube channel, and the ArtiFact Podcast. Recent episodes include a discussion of Ryusuke Hamaguchi’s “Asako I & II” and “Drive My Car”, a catalogue of Elon Musk’s stupidest claims, and a breakdown of abortion, Roe v. Wade, and the Constitution.