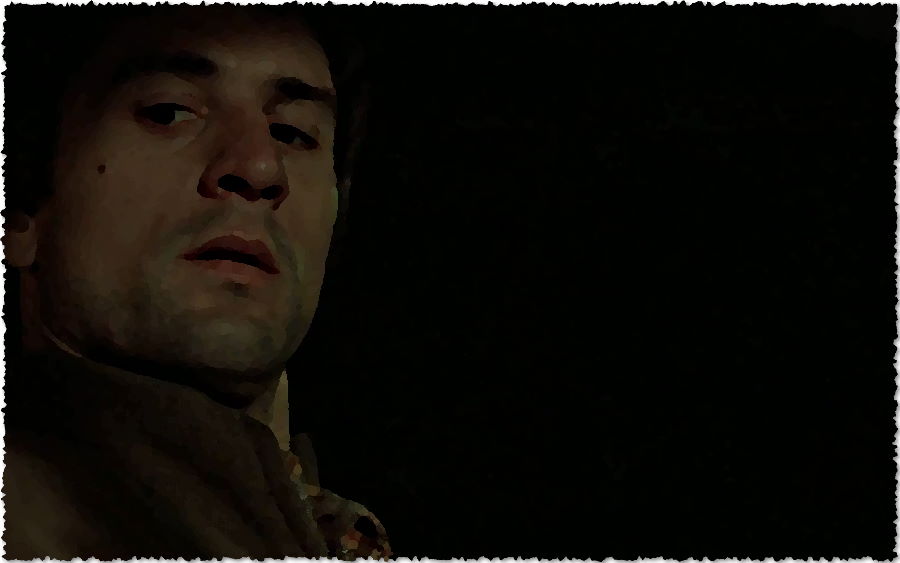 [For an extended discussion of Martin Scorsese’s Taxi Driver with the author and two other panelists, subscribe to our Patreon page.]

There are few films that encapsulate loneliness as well as Martin Scorsese’s Taxi Driver. Two others that come to mind are Woody Allen’s Another Woman (1988) and Terrence Malick’s The Thin Red Line (1998). In the Allen film, a woman turning 50 comes to realize that she has pushed everyone away, and in the Malick film we witness how war isolates the spirit from the mind. And yet Taxi Driver is not only the portrait of a weathered man facing his own war, but one who attempts to connect and fails every time. Travis Bickle (Robert DeNiro) works at night and so his world is dark and violent. ‘All the animals come out at night,’ he says, as he looks on with contempt and disgust. Still, he longs to belong somewhere but does not know where that is.

For start, we do not know much of his past, other than he is an ex-Marine who was honorably discharged in 1973. As for education, ‘a little bit here, a little bit there, ya know,’ he says. We don’t know his parents or how he came to be other than his wish to escape his life via working long hours in a taxi. People enter his cab and then they depart as quickly as they came. There are no attachments. Then, when it is morning and his shift is done, he is forced to wipe the semen off the seats before he escapes to a porno theatre.

‘Loneliness has followed me my whole life,’ he says. But when we see the world via Travis’s eyes, we see that it is an unkind, urban hell. All around are whores and pimps and crime. ‘Do you know what a gun can do to a woman’s pussy?’ a jealous husband in the back of his cab asks (a cameo played by Scorsese). Thus, Travis longs for something to come along—a good, hard rain to ‘wash away all the scum.’

Then, one day he spots beautiful, blonde Betsy (Cybill Shepherd) through a window and he places her as some Madonna figure that has risen out from the trash. He asks her out in a way that is intrusive, e.g., ‘I can see that you’re not a happy person.’ His aggressive moves don’t deter her, however, as she finds him physically attractive—or at least interesting, and so she agrees. Then, while with her, he shares that he knows not much of anything, including politics, music, film, or even how to behave on a date, when he takes her to a porno film out of what he believes is good intention. ‘This is a dirty movie,’ she objects, but he insists that a lot of couples come to see it.

Thus when she rejects him in perhaps the film’s most famous shot, Scorsese makes a point to turn the camera away from this rejection, as it is something too painful to witness. Instead, we are presented with an empty hallway that mirrors Travis’s own bleak emotional landscape. It is this rejection, perhaps, that finally makes him ‘snap’ and eventually erupts him into something violent.

Following this hurt, Travis works his long hours only to come home to the grit and dirt of his apartment. Ultimately, when he does try to confide in someone, he fails. Peter Boyle is great as the Wizard—who is basically the older ‘wiser’ cabbie who has been doing this job forever because he has no other prospects. Travis is encouraged to seek advice from him—‘Yeah, things got me real down,’ he says. In response, the Wizard goes off on a ridiculous pseudo-philosophical lecture where he makes it seem like his life is the way it is because he’s chosen it. ‘Why don’t I own my own cab? It must be because I don’t wanna,’ he says, following with, ‘Ya know one guy is a doctor, another is a lawyer, people die, people are born…’ At the conversation’s end, neither knows what the other is talking about. ‘That’s about the dumbest thing I ever heard,’ Travis says. ‘Look, I don’t even know what the fuck you’re talkin’ about,’ the Wizard replies, before suggesting that the young Travis merely needs to get drunk or laid.

While a short scene, their interaction is a brilliant showing of two people unable to understand one another. How often have you, reader, undergone something similar with a boss, family member, or coworker only to afterwards feel lonelier and more misunderstood? Instead, Travis doesn’t know what to do with himself, and so he shows up at a political rally with an intention to assassinate the candidate for whom Betsy is working. Now, Travis’s mind is fragmenting—he stands in front of the mirror talking to himself, ‘I’m the only one here,’ as the camera breaks apart his dialogue. ‘Listen you fuckers, you screwheads, this was a man who would not take it anymore…’ He longs to achieve something he can’t put words to, and this longing manifests via his desire to ‘rescue’ Iris (Jody Foster), a young runaway prostitute. ‘I don’t know who is weirder, you or me,’ she tells Travis. The conversation they share over breakfast is perhaps the only successful connection he’s managed with another person, even if under the guise of being her ‘savior.’

Once the violence ensues between Travis, her pimp (Harvey Keitel), and a band of gangsters, Travis is lauded a hero. Iris’s family thanks him in a letter, while the papers praise him. Betsy too, while riding in his cab, seems to view Travis with newfound admiration following this attention. Just what are we doing here? And what have we witnessed? Travis was planning violence in some manner, and that his murderous rampage fell into society’s favor can be attributed to fortunate randomness.

But there is more to all this. As Ebert notes, Taxi Driver is not just a New York film, as Travis’s suffering could transpire anywhere. Travis is, in effect, someone who resonates with many. He is both someone we’ve known and someone we’ve been. It’s not that his feelings are so unique, it’s just that most can endure them better than he. Without his taxi rising up out from the rain and steam, Travis would ride alone at night anyway, and even were he removed from his circumstance, we get the sense that he would fall into the same violence and porno houses regardless.

Scorsese set the tone for the urban nightmare in Mean Streets (1973), where litter clings to the side streets and cars and bars and criminals become the way of life. This is city life—buildings, pavements, and numbered avenues and streets. Life is crowded and there is no room for tenderness. The difference, however, is that through Travis, we witness a fast moving world in slow motion, as he gazes upon his cup fizzing with Alka-Seltzer or some drug-dealing thief in a store. Indeed, something is off about him—or rather, that would be the polite way to say it. But perhaps the most telling is that Travis is not so unusual and nor is he so different. It’s just that he has become the symbol of someone suffering from too much aloneness, and his moment of redemption is, perhaps, nothing more than a reflection of society’s shallowness. ‘Scorsese wanted to look away from Travis’s rejection; we almost want to look away from his life,’ Ebert notes. What is Travis Bickle? Many, upon sight of him, too easily might dismiss him. To answer would require us to look.

If you enjoyed this analysis of Martin Scorsese’s Taxi Driver, consider supporting us and get patron-only content on our Patreon page. This will help the growth of this site, the automachination YouTube channel, and the ArtiFact Podcast. Recent episodes include a climate activist’s take on Ted Kaczynski’s Unabomber Manifesto, a discussion with Norman Finkelstein and Palestinian refugees on their memories of war, and a re-examination of James Cameron’s Terminator films.

More from Jessica Schneider: Reinventing Noir: Philip Kaufman’s “Invasion of the Body Snatchers” (1978), Beyond the Comfort Zone: Louis Malle’s “My Dinner With Andre” (1981), ‘But They Both Wrote About Hawks!’: Robinson Jeffers’s “Hurt Hawks” vs. Ted Hughes’s “The Hawk In The Rain”