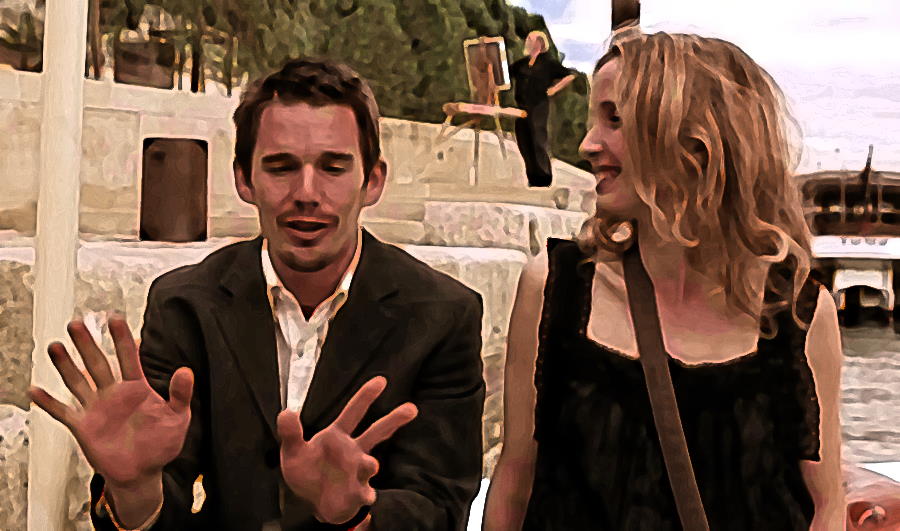 We’d like to think that being a few years older and a few years wiser could offer us our much needed life do over. Scenes replay in our minds: if only I could have met that person now, I might have reacted differently. And it is not so much the events and eras that change, but rather, our perspectives. Only time can help shape that. Life will often, more or less, remain the same.

It is now nine years later, and Jesse and Celine are both nine years older. He’s written a book and is giving a reading in Paris, which is where Celine lives. She shows up. The book is about their night together, and Celine admits that she’s read the book twice. At the end of Before Sunrise, we don’t know if the characters will meet in six months. In Before Sunset, we come to learn that Celine’s grandmother died and was buried on the day they were supposed to meet. Hence, she could not come to Vienna. But he did. He admits to waiting and feeling that disappointment and perhaps this missed meeting was the thing that jaded them both to the idea of Romantic love.

The characters, now that they’re older, are also more levelheaded. Celine has an environmental job and Jesse works as a writer/professor. He is in a loveless marriage and she is dating a guy who is never around. She admits that men enter her life, only to depart, but not before thanking her for showing them what love is. This makes her angry and resentful. Celine, while still the same, is more outspoken than her earlier character. She is a feminist who punishes herself for still having these Romantic longings. ‘The concept that we should find one person to spend our lives with is evil,’ she says.

The attitudes within Before Sunset are different from the first film. Rather than idealism, Jesse and Celine are laden with disappointment and reality. Both characters have come to learn that life is not an ideal parade, but that very often it can and will go wrong. As example, in Before Sunrise, their sexual congress is done from a distance, alone, at night, in a park, after sharing a bottle of red wine. In Before Sunset, Jesse remarks that he still remembers the brand of condom used. ‘We had sex twice,’ Celine says, after denying it at first. (These sorts of details don’t often enter the whimsical, fantasy mindset that is present in the first film.)

Life has continued. They have moved on and they both have experienced regret. One regret is not sharing their full names or contact information years ago. Had they, just how would their lives be different? Throughout, we follow them in Paris, where they go in and out of cafes, wander down streets, take a boat ride. This film is an exercise in conversation, and it is a testimony as to what good dialogue can achieve. The title, Before Sunset, is apropos to their place in life. Before Sunrise had the feel of being on the cusp of something—a new possibility, a new day. But now, the characters have seen the possibility and have seen the day. At 32, while nowhere near their lives’ end, they have enough years behind them to at least feel partially crushed. Celine, for one, believes that the world is horrible—so much toxic emissions and pollution—what will this planet come to? Jesse, on the other hand, believes that life is at least getting better, generally speaking. But does anyone really thrive amid generalities? Does he really believe this or is this merely an opinion of convenience?

This is not to say that Before Sunrise is a pessimistic film—quite the contrary. In fact, beneath their somewhat jaded exterior, both still admit to sharing that same Romantic longing. The film, while shorter than the first (finishing at just around 80 minutes) is tighter. And the more mature dialogue lacks the distractions from the first film. (And by distractions, I mean the interactions with the locals. This could also be seen as a detriment as well.) Instead, we get long shots of their verbal interaction, which is an accomplishment. Yet despite being a sequel, Before Sunset could stand alone, without the support of the first film. But one should ideally watch them in order to gain the full experience.

I watched Before Sunrise when I was 19–just a few years younger than the characters. I watched Before Sunset at 28, and for both films I could relate to each during those respective times. As a contrast, when I watch Before Sunrise now, I view it more through the lens of nostalgia—a sort of treasure I hold to a tender time within my own life, which also mirrored theirs. After all, what is memory without time to hold it into place? Why do many admire vintage apparel, antiques, retro-looking houses, small town shops, old films, or historical European cities? While each carries timelessness, each also acts as a transport into another era—one that we find safe, magical, and wonderful.

In his Three Colors Trilogy, Krzysztof Kieślowski explores the idea of randomness and synchronicity, where people pass one another by chance. (Julie Delpy also stars in the middle film, White.) Throughout Three Colors, we hear all three stories and the characters only meet up in a moment of randomness when they all undergo a boating accident. Perhaps Jesse and Celine, while both admitting to living in New York City in the late 1990s, might have passed one another on the street very similarly to those characters within Kieślowski ’s films. How much control do we have over our destiny? Had Celine’s grandmother not have been buried on the day Celine was supposed to be in Vienna, what might have happened?

Near the film’s end, Jesse is supposed to catch a plane, but he continues to distract himself—he walks Celine to her door, he asks her to play him a song, she makes him a cup of tea, he puts on a Nina Simone CD. Meantime, the sense of urgency has fallen away and when Celine reminds him that he’s ‘gonna miss that plane,’ smiling, he merely responds, ‘I know.’ Life often offers much that we cannot control, but it also offers much that we can. The film fades out as if this time were a memory. And Jesse, presumably, is going to miss that plane.

I was recently informing someone born in the 1990s about Before Sunrise, and how that film offers such a magical moment in time. Back then, I felt like I had space to breathe and to dream, as well as the space to fantasize about writing and travel and to grow into the person I’d eventually be. For me, the future remained some grand, nebulous thing. How else to describe it—but while watching and remembering these films, it becomes difficult to decide which moment is the present. Before inevitably becomes after—therein lives the memory.

If you enjoyed this review of Richard Linklater’s “Before Sunset”, consider supporting us and get patron-only content on our Patreon page. This will help the growth of this site, the automachination YouTube channel, and the ArtiFact Podcast. Recent episodes include a discussion of Roe v. Wade, abortion rights, and the law, Richard Linklater’s “Before” Trilogy, and a discussion of Hermann Hesse’s classic novel, Steppenwolf.

More from Jessica Schneider: From There to There: The Life and Vision of Bruce Ario, Wistful Dissolve: Richard Linklater’s “Before Sunrise” (1995), A Star Is Worn: On Rupert Goold’s “Judy” (2019)