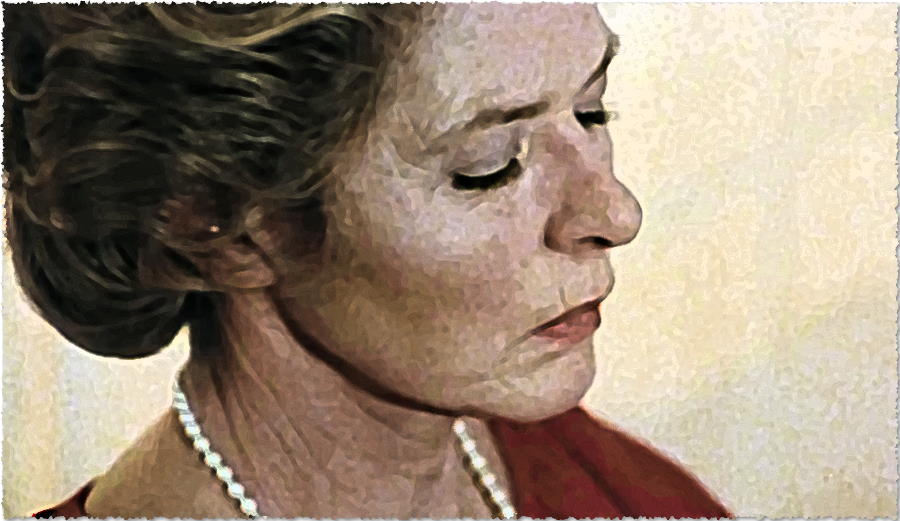 Often, we sit apart from another—presuming to know what that person is thinking. We imbue our motives into them, where we admit to not understanding why someone else has chosen the life they have. Why are they not more ambitious? More career-driven? What is ambition, anyway? Before we begin, we at least need to define ambition, and how goes this definition that varies person to person? For some, a career and kids are enough. Yet others might long for artistic success and recognition. Yet what does that entail, exactly? And where and how does that person become? I’ve often traveled to old towns and have marveled over the abandoned—be it buildings, forts, roads. Who lived then? Who defined those now expired standards? And where are those standards now?

Ingmar Bergman’s 1978 film, Autumn Sonata, is what most closely resembles a play by Chekhov or Strindberg. The words and the women are intense—feelings are felt and painful and abrupt, and moments have been brushed aside, but are not forgotten. Liv Ullmann plays Eva, a quiet wife married to Victor. She has an inner intensity brewing. Charlotte (Ingrid Bergman) is her mother. She is a self-centered concert pianist who is paying a visit upon Eva’s request. The shadow amongst them is Helena—Charlotte’s ‘other’ daughter who is suffering from a debilitating disease. Charlotte does not deeply care for either of her daughters and yet she makes an appearance for the sake of convenience. When Eva informs her mother that Helena is here, Charlotte is not pleased:

‘You should have written to me that she was here,’ Charlotte says.

‘If I’d told you she was living here, you wouldn’t have come,’ Eva replies.

‘Oh dear, and it all seemed so nice for her at that nursing home.’

Charlotte reluctantly enters Helena’s bedroom, but their interaction is commonplace and perfunctory. We witness Helena amid her loneliness, as she remains strapped to her bed. Whether Charlotte recognizes this or not is to be seen. Charlotte presents herself cheerfully, with future faking—‘I’ll read to you later, would you like that?’ she asks. Helena struggles to speak, but Eva is able to translate. She longs for her mother, as what an emotionally destitute life this young, paralyzed woman lives.

Perhaps Autumn Sonata’s crux resides within the quest for control—just who controls whom? Eva is thrilled that her mother has visited, but is she really? She’s taken the extra steps—even placing a wood board beneath the mattress as a means of remedying Charlotte’s back pain, which has developed as result of years at the piano. Eva also compliments Charlotte to the extreme, but what does it get her? Charlotte shows up at dinner in a red dress, which came recommended from a friend. ‘Do you think it suits me?’ Charlotte asks. ‘…It does suit me. I’m ravenous.’

Meanwhile, there exists a mother-daughter competition when Eva delivers her rendition of Chopin, and Charlotte is there to cut her down and reduce her efforts as something insignificant:

‘Chopin was emotional, but not mawkish. Feeling is very far from sentimentality, the prelude tells of pain, not reverie. It hurts, but he doesn’t show it,’ she says.

‘I liked you,’ Charlotte replies.

‘What does that mean?’

Within Bergman’s films, words exist under the radar. They become the Sotto Voce of life. Most never uncover so many feelings within some given time, but within the mother-daughter tale in Autumn Sonata—everything, that is, life, vice, vulnerability, hatred, and sentimentality—all can be uncovered. Eva eventually admits that the sins of the mother become the pain of the daughter. Charlotte is self-absorbed and exists only as a child to her daughter (she wishes Eva would come to her with caresses and not demands) and she abandons when emotion grows too overwhelming.

Eva admits, within her childhood scenes, that she never felt she was good enough, that she was ugly, and that she was the one left to comfort her father whilst her mother was out touring and engaging in affairs. Meantime, Helena, who then was not so sick, has shown feelings for a man that kisses and ultimately abandons her. Are we not all left to the whim of longing?

Later that night, Charlotte wakes from a nightmare. Not shortly after, Eva also wakes from Charlotte’s screams. The two meet in the living area where words are shared over a bottle of wine. We come to learn that Eva not only resents her mother, but also hates her. In one devastating scene, a young Eva enters a room when Charlotte is taking a break. Instead of engaging with her daughter, Charlotte wishes to be alone. And Eva speaks not with regret, but with anticipation. She speaks of Helena’s eyes and how bright they are. Throughout the night, both Eva and Charlotte exchange more words. They escape (these words) via their many contorted emotions. They seem to exist on some other plane.

Ingmar Bergman believed that the mother-daughter relationship offered the ultimate insight into the human condition. ‘Sometimes, when I lie awake at night, I wonder whether I’ve lived at all. Is it the same for everybody? Do some people have a greater talent for living than others or do some people never live, but just exist?’ Charlotte asks. These questions are common amongst artists, and for someone as self-absorbed as Charlotte, she clearly views her daughters as failures. ‘Why can’t she die?’ Charlotte privately asks, with regard to Helena. (She asks this to Winter Light’s protagonist played by Gunnar Björnstrand, who accompanies her on a train and merely nods, as he speaks not a word of English.)

Meanwhile, Eva visits the cemetery where her young son is buried. (He drowned when he was four.) It is early evening and autumn—the time that exists just on the cusp of some new arrival. We could spend our lives longing or could instead choose to live. Charlotte, who cares for no one but herself, departs abruptly. ‘Poor mama,’ Eva says. ‘She was so upset. And now I’ll never see her again.’

But the sadness herein is not Charlotte’s but Eva’s, who seems to have chosen a life of living for others. And longing she is, always longing. Perhaps by being Helena’s caretaker Eva feels closer to her mother, and is receiving a familial love that she otherwise has been denied. At times, I think back to my youth and I regret those long hours I spent longing for something that would never come. And to exist as Helena—one with a cognizant, functioning mind and yet is unable to move or speak. In many ways, Eva has chosen a life of helplessness, yet her only remedy is caring for Helena, who has become a substitute for her absent son. In her own way, Eva too is every bit wounded, an invalid.

We move amongst ourselves, and we even overhear what we wish to engage in, yet choose not. Who lives in that small moment therein? Those who lived long ago do not necessarily hold the answers, but they seem to carry a confidence insofar as knowing what falls where.

This is—we end it, here.

If you enjoyed this review of Ingmar Bergman’s “Autumn Sonata”, consider supporting us and get patron-only content on our Patreon page. This will help the growth of this site, the automachination YouTube channel, and the ArtiFact Podcast. Recent episodes include a discussion of Ryusuke Hamaguchi’s “Asako I & II” and “Drive My Car”, a catalogue of Elon Musk’s stupidest claims, and a breakdown of abortion, Roe v. Wade, and the Constitution.