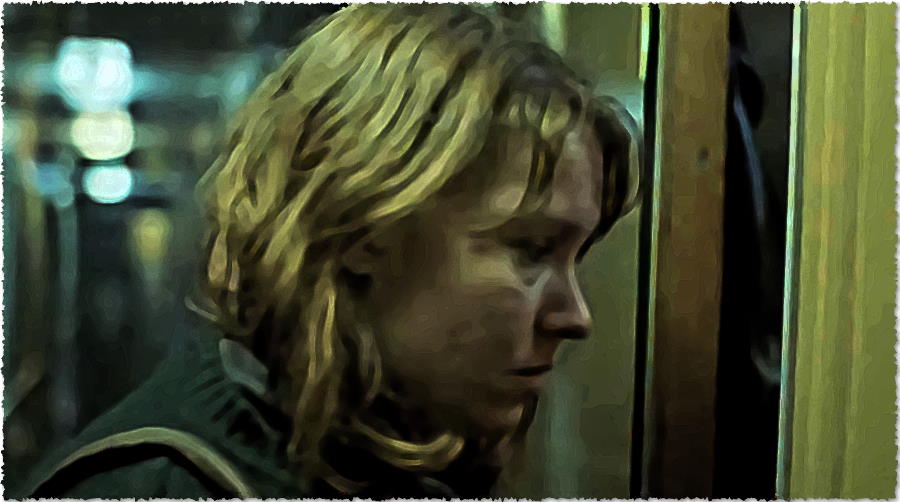 In Juho Kuosmanen’s Compartment No. 6, Laura is an introverted, soft-spoken Finnish national studying the Russian language in Moscow. Ljoha (or Lyokha, depending on how you want to Anglicize the name) is the sort of crass, bull-headed man that another character later on in the film remarks “is pumped out of a factory.” Both are on their way to Murmansk, in the northern wastes of Russia, and have found themselves partnered in the same cramped train compartment. Laura wants to inspect the Kanozero Petroglyphs, in order to discern humanity’s future from its past. Ljoha is heading there for work at a mining facility, so that he can build up funds for his own business ventures. That they are both searching for something more than their stated purposes is clear, although Laura is the more befuddled of the two, too vexed by her own romantic agonies to realize that she likely couldn’t give less of a damn about some old stone carvings in the Arctic cold.

Juho Kuosmanen’s adaptation of a novel by Rosa Liksom is a kind of love story, and bluntly states itself as such by the end, but there is no saccharine meet-cute, and the setting is less than quaint – instead, there is a pervading sense of melancholy, as Laura is a stranger in a strange land, and her journey away from Moscow’s ivory tower as well as an ephemeral relationship (the opening party scene deftly portrays the cutesy pretensions of the academic types that Laura’s girlfriend, Irina, pals around with), into wilder regions are punctuated by shots of the train’s slow passage through rainfall, icy winds, and barely-lit nights. The discomfort of human smells and unwanted company are only briefly alleviated by a cracked-open window or the precious gentility of a dining car. Kuosmanen and cinematographer Jani-Petteri Passi ably maneuver their camera through the train’s confined interiors, following its characters like a particularly nosy companion in order to adequately capture their reactions. Such transit allows for very little privacy, and, outside of complete stonewalling, one is almost forced to associate with fellow travelers in order to pass the time more easily. While the connection between Laura and Ljoha is undeniable, all these elements make us ask: how much does sheer convenience (with chance contriving a sort of Stockholm Syndrome for both parties) play into their growing bond? They are, after all, very different people, as Ljoha is mystified by Laura’s wannabe intellectualism and cannot accept her canned reasoning for wanting to see the petroglyphs.

It isn’t a question that these characters care to ask, however, as each begins to unpeel themselves to the other in ways they feel they can afford. In Compartment No. 6, a man like Ljoha is a case study in macho posturing, and is more like an over-eager teen boy than the entrepreneur he wants to forge himself as. He introduces himself to Laura with such crudity that one wonders why she’d ever give him the time of day afterwards, but his crudity veils a longing for tenderness in the same way that Laura’s scholarly clichés hide utter loneliness, and a need for affection that Irina’s absence (and coldness, exacerbated by distance both physical and linguistic) creates in her. In the emotional turning point of their relationship, Ljoha contrives a way for Laura to meet a maternal figure in his life, a sweet babushka full of odd sayings who reveals a side to the man not previously apparent in the awkward trappings of their compartment. “I am a good boy, at heart,” the meeting attempts to communicate. “I am not the danger you seem to think I am.”

As for Laura, the further she gets from Irina, the more Irina uncouples, which is prophesied by a cutting remark from one of the partiers in the film’s start, gossiping about how Laura is another one of Irina’s “lodgers”. Is the trip (which was originally planned for the both of them, until a last minute cancellation by Irina) just a way for Irina to dislodge a momentary affection from her busy life? Most likely, but it’s not really Irina herself that Laura pines for – it’s the intimacy, the look in her eyes, that she finds herself aching for as their train wends through the foreign freeze. Is Ljoha a sufficient substitute for Irina’s lavish touch? Can such cloying (yet somewhat impotent) masculinity be enough to satiate Laura’s hunger? When their moment occurs, they appear to hang on the precipice of both gain and loss, Ljoha’s eyes transfixed by sensation he does not seem to fully understand.

With the constrained nature of the film (and clocking at a brisk 108 minutes), Compartment No. 6 has to rely on the performance of its leads, and Seidi Haarla’s Laura and Yuriy Borisov’s Ljoha are skillfully naturalistic, hewing to the gritty, down-to-earth atmosphere of their surrounds. Haarla manages to capture her character’s mousy awkwardness, and Borisov’s bluster is pitch-perfect, rendering his lapses into complete vulnerability all the more touching. What’s also noteworthy are the relatively plain features of the duo. Neither are ugly, by any means, but they look like the sort of closed-off, ordinary people you might meet on a long train ride. They are not almost angelically good-looking like the young Ethan Hawke and Julie Delpy in Before Sunrise, another love story that commences on a European train. Laura and Ljoha’s conversations are not intellectual and full of heady flirtation like that couple’s, but are nevertheless believable in displaying their odd connection. While this film does not augur a long-lasting, transcendent love like Jesse and Céline’s, perhaps it is even more poignant for its unlikeliness, its fleeting quality.

For how much does chance play into any significant bond, much less Laura and Ljoha’s? In the course of life’s queer transits, how many conjunctions are secured through conscious, planned-for action alone? These routes, on the surface, are as meaningful as the primeval scrapings in stone that draw Laura to the far north. They contain more of our own longings than we might speculate, concealing their origins whilst uncovering our indigence. And how many of these events, these transitory welds of moment and meaning, are marked by their imminent decay? Compartment No. 6 takes place shortly after the Soviet Union’s collapse, and Laura’s sojourn from the worldly capital to the species’ nascence seems to act like an erasure of civilization itself, diminishing cities into a man, a woman, and the shore.

A striking quality of the final scenes involving the improbable pair is its quietness, the minimal dialogue – and appropriately so. Laura and Ljoha’s emotions take precedence over language, which they must stumble through, anyway, and what they share (and must, in all likelihood, eventually pass over) coalesces better in a blizzard’s sheer glee; is more deeply felt in silent musing over water, rock, and glyphs of even greater silence.

If you enjoyed this review of Juho Kuosmanen’s “Compartment No. 6”, consider supporting us and get patron-only content on our Patreon page. This will help the growth of this site, the automachination YouTube channel, and the ArtiFact Podcast. Recent episodes include a discussion of Ryusuke Hamaguchi’s “Asako I & II” and “Drive My Car”, a dissection of Elon Musk’s stupidest claims, and a critique of James Cameron’s Terminator films.