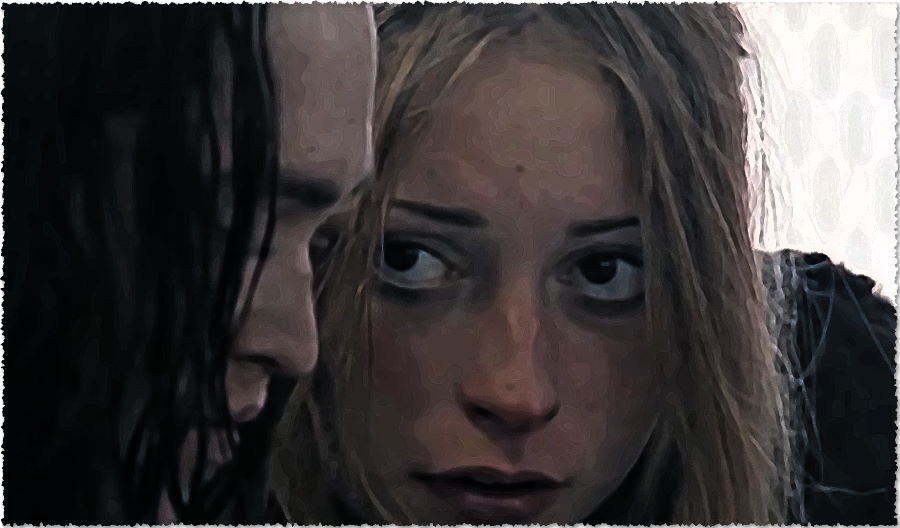 The most direct comparison for Heaven Knows What is the Harmony Korine movie Kids, the most well-known of this archetype of subject. It’s undeniable that Heaven is a continuation of something that Kids started – the aromantic treatment of New York as a setting, a voyeuristic sense of glimpsing into fringe experience. However, Kids faced issues of glorifying the kind of momentary satisfactions that the addict lifestyle could offer, whereas Heaven Knows What feels like a spoonful of reality caramelised on a skillet. Kids draped itself in a trendy cultural subversiveness and had a fashionable cast of ne’er-do-wells, Heaven Knows What is anything but trendy, and its cast is dishrag ratty. Holmes is the eye-of-the-storm, implacable in some scenes and then gurning and twisted in others, she’s a weathervane for the downward momentum and a superb player.

Heaven begins in a silken, bizarre dream sequence, or flash-back, of a grand romantic moment between Harley (Holmes) and her greasy Heathcliff, Ilya (Caleb Landry Jones). The strange and delirious style distracts the viewer, until they realise that Harley and Ilya are rolling in a daze across an abandoned concrete forecourt, unaware of the world around them, lost in an enormous moment. It’s a strong start, the film already deciding to veer from strict depiction into artistry, a creative decision that will repeat throughout. The opening fifteen minutes are mostly close-ups, first of Ilya and Harley, then Ilya showing his friends a doom metal album on the free-access computer in a public library, and an extended sequence where we learn that Ilya and Harley have recently broken up, probably not for the first time, and Harley has threatened suicide if he leaves her. This all culminates in Ilya provoking Harley into slitting her wrists.

The audience isn’t allowed to get their bearings on the characters or the situation, and this anxious confusion is a deliberate and well-made choice. We don’t know why Ilya and Harley have split, or even really who they are in the movie’s context. This disbalancing approach to narrative helps to force the viewer into the mindset of a homeless addict, the intensity of the moment and the lack of past or future. We’ll learn more about the delirious relationship between Ilya and Harley through implication, but it’s evident the dynamics at play. The viewer isn’t allowed to be the passing voyeur like they might otherwise be, passing in the street as the toxic and addled couple scream at each other. Not being allowed to look away reveals the contradictory psychological condition these characters inhabit.

Post-suicide attempt, Ilya freaks out and calls Harley an ambulance. The ambulance sequence and the mental institution that follows is continuous and unrelenting, particularly the latter scenes. The institution is essentially a montage that encapsulates a miserable few weeks, Harley walking dissociatively through long bland corridors, professionals and fellow patients approaching her to chastise, or scream, until returning to the other residents and other loud, caustic dramas. This scene is the foundation of the loud and nauseating follow-ups in Good Time and Uncut Gems, but unlike those movies’ singular protagonists, vehicles for endless noisy confrontations, you probably already feel a nurturing and deeply sympathetic concern for Harley.

We follow Harley emerging back into the street-scene, greeted at first by recurring Safdie alumn Necro, a rapper, a rapper, arriving to pick her up from the hospital. She quickly makes contact with Mike, as Necro’s character Skully is clearly intent on just making unwanted advances. Mike and Harley seamlessly transition into a drugs for sex dynamic, but the relationship’s transactional nature is pierced by a depressing, sweet intimacy. Mike is a masterful turn by an addict associate of Holmes, Buddy Duress, who starred alongside Robert Pattinson in the Safdie’s follow-up picture (and can’t stop stealing microwave ovens long enough to break into the mainstream).

Mike and Harley’s adventures are the bulk of Heaven Knows What, and have a sad finitude. We watch them move from squat, to off-the-books flop-house, and clash and scream about bags of heroin on tick, Mike even establishing an allowance for her. This is in exchange for her work, ‘spanging’ (for spare-changing), which funds their cramped accommodations. Watching them and their extended group of frenemies get fucked up together and dance to awful music, or nod out to awful movies (Harley is a big Hellraiser sequels fan), shows the characters’ innocence and familiarity. A movie like this is often accused of being ‘misery porn’, but these moments of elation are actually elating! The use of deliberately hack and kitsch culture is true to life – the expected indie film urge would be to make them norm-cultural virtuosos and have them watch Linklater movies and listen to Arcade Fire, but this is an aspect that clearly came from Holmes’s experiences actually living in that community. Bad taste is real, and it’s grounding to see portrayed in fiction.

But despite being too sympathetic for true voyeurism, the camera often has distant designs. The characters are filmed from a distance in this section of the movie as if koalas in a BBC nature documentary, alone in negative space. Ilya’s significance is established through a subtle change of visual portfolio, the character of the camera becoming claustrophobic and tightly focused. It’s an effective way to assign an aesthetic to deep, codependent and toxic affection.

It takes a down-turn when Harley and Ilya inevitably reunite and put their troubles behind them – or do they? They pull a series of convenience store lifting scams that seem to be ripped straight from Abbie Hoffman’s Steal This Book, which just really feels like padding for time. It’s a shame, for the lackadaisical nature of Mike and Harley is probably the film’s zenith. Ilya, predictably, abandons Harley again, and incinerates himself when his bedding catches on a lit candle. The scene is haunting and something one finds in the headlines of a local paper, but we can’t be too mean-spirited – Ilya Leontyev was a real person, who died of an overdose before the movie’s completion. The ending seems predestined, and a cycle that will be replicated until the old stone stops turning.

For another movie that portrays the post-structural wasteland of addiction and dropping out of society completely, the Scottish film Neds has a penultimate montage of the angel with a dirty face protagonist wandering listlessly from concrete stairwell to concrete stairwell, huffing glue he bought at the local shop and lapsing into protracted bouts of unconsciousness. Complete decay of a person is an aesthetic to be tapped, but it has to be experienced to be portrayed, and most of us won’t ever get close. But those of us who have bottomed out and lived even a fraction of those experiences, its pale reflections of a once vivacious self in shop windows, and the sickly cast of LED displays, and concrete, and clutter, and boundless noise, and chemical escapism. It could have been a movie about society’s ills and that would have been infinitely worse. Just the depiction is powerful enough.

If you enjoyed this review of Benjamin and Joshua Safdie’s Heaven Knows What, consider supporting us and get patron-only content on our Patreon page. This will help the growth of this site, the automachination YouTube channel, and the ArtiFact Podcast. Recent episodes include a survey of photography from Josef Sudek to Laura Makabresku, an examination of Abstract Expressionism as depicted in Kurt Vonnegut’s Bluebeard, and a debunking of Internet sciolists such as Jordan B. Peterson and Christopher Langan.