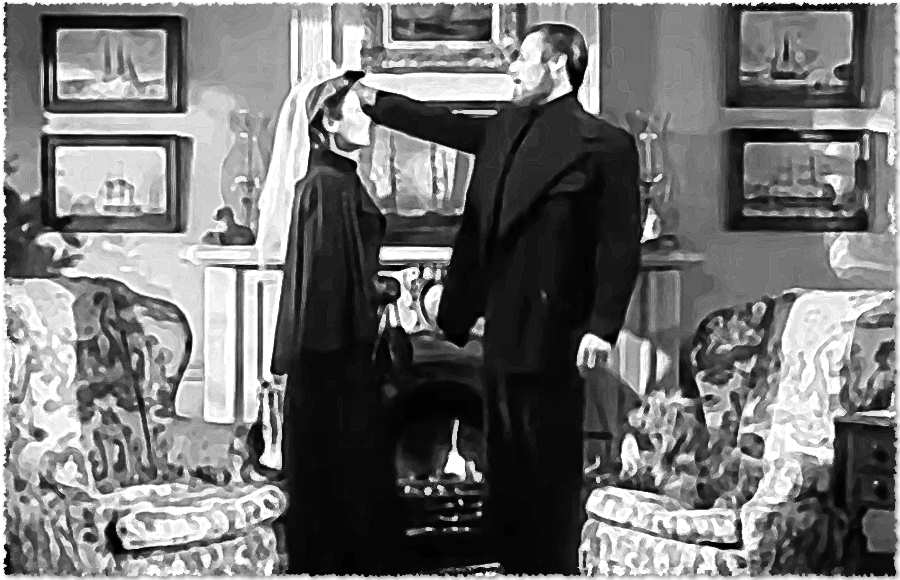 I first heard about The Ghost and Mrs. Muir via Harry Nilsson, who appeared in the 1960s television series. Nilsson played—you got it—a singer who’d been forced to spend the night at this seaside abode due to impending rain and thunder. Such a strange concept, I thought. A ghost who haunts a woman he loves only in afterlife? I watched the episode, and aside from Nilsson’s performance, I found it dull. The show didn’t last and was cancelled after two seasons. Thus, imagine my surprise when I learned this was a film directed by Joseph L. Mankiewicz. Really? They made a series from this film? How very odd.

Following recommendation, I watched it, and afterwards, I watched it again. And what a darling film this is. Love, death, longing, and romance—what else does one need? The film begins with Lucy (Gene Tierney), a widow who longs to live by the sea. Despite opposition from her in laws who want her to remain in London out of respect for her late husband, headstrong Lucy goes to purchase an abandoned cottage that is now overrun with four years’ vegetation. Gull Cottage, is what it is called, and it is supposedly haunted. In fact, no one is willing to stay there for more than a night. But upon Lucy’s visit, she falls in love with the house instantly, as though something is pulling her towards it. Oh, and what could this be other than Captain Daniel Gregg (Rex Harrison)?

And how adorable is he, amid his ornery demands. ‘If there is one thing I can’t stand to see, it’s a woman crying,’ he says. The Captain appears one night, demanding she leave his residence. He is a grouchy ghost who would rather see his property turned into a lodge for seamen. But Lucy refuses to bend to his whims. ‘I like your spunk,’ he says. Captain Gregg spent years living at sea, adventures abound. He simply had no time for romance. He is a man’s man, after all.

Mistakenly, Lucy was misinformed that he committed suicide, but it turns out he died due to gas poisoning. Thus, when she falls asleep in her bedroom chair, the window opens. Captain later admits that he did it to protect her. ‘I don’t need your protection,’ she says. He appears and then disappears but only as an illusion, as he is not real. Real versus unreal is a recurring theme throughout The Ghost and Mrs. Muir. We make believe, we play pretend and even distort our own memories and dreams. And after enough time, we might not be able to distinguish any from all.

Lucy has a young daughter named Anna (played by young Natalie Wood), wherein the passage of time is cleverly utilized via a wooden post in the sea with Anna’s name carved into it. As time passes, the post grows more ravaged. At one moment, Lucy (or Lucia, as Captain Gregg calls her—‘It’s the name for a queen,’ he says) transcribes a novel that he dictates. It is the story of a seaman’s life—rough, ravaged and full of blood. She brings it to a publisher in the hopes to earn money so she can remain in the house, now that her investment has depleted. However, whilst writing the book, the two seem to fall into an unspoken love, albeit one has to only see the way he pauses when he looks at her. And that the two never touch is a testimony to both the skilled writing and acting herein.

However, there is a problem. Captain Gregg is a ghost, after all. Thus, a romance cannot ensue. Eventually, Captain Gregg informs Lucy that she needs to go out and to meet men. ‘I have no interest in meeting men,’ she replies. This, however, changes when Lucy encounters a children’s author named Miles Fairley who writes under the alias Uncle Neddy. Played by George Sanders, he is well cast as an annoying creep who pushes himself onto her. (Admittedly, this makes Captain Gregg jealous.) They kiss in the orchard, but similar to her first husband, Captain Gregg acknowledges that she doesn’t really love him either. ‘But at least he is real,’ Lucy tells herself.

Throughout, Captain Gregg softens and he becomes more endearing. He knows that his presence will prevent Lucy from moving on in life and so one night he leaves whilst she sleeps. He informs her that his presence was only a dream and that she was the one to author their book. ‘It was all a dream, Lucia my darling,’ he says, before departing. Then he is gone. Meantime, Lucy learns that Mr. Fairley has a wife and is a habitual cheater. Yet afterwards, Lucy decides to live her life as a recluse—at Gull Cottage, yet still she longs for something felt but unseen. It is not until she learns from her daughter Anna that Captain Gregg was in fact real. Years pass into decades until Lucy lowers herself into the same chair, before the same window that Captain Gregg opened years earlier. But rather than sleep, she dies. Then, in less than a second Captain Gregg appears to retrieve her spirit. (He didn’t waste any time!) Together at last—albeit not in life but in death.

Upon rewatch, I noticed more the second time. Whilst the ending is happy, Lucy’s life isn’t necessarily so. Is it the best option to spend one’s life in isolation? Granted, she isn’t necessarily left pining for Captain Gregg the entire time, and that he tells her his presence was a dream shows his kindness, as he wishes for her to choose life over him. In fact, the only physical touching that occurs between the two is when they link arm in arm, after her death. It is remarkable, actually, to have such a convincing love story in midst an otherwise odd and challenging situation. Because ask yourself reader, does this not sound incredibly cheesy? Yet, the film cleverly and tenderly succeeds.

And where exactly does Captain Daniel Gregg disappear to for all those years? In one sense, the film is about longing, but who is doing the longing is a matter of opinion. Both Lucy and Captain Gregg spend their existence apart—she in life and he in death. Is it that they were soul mates meant to join only in the afterlife? The Ghost and Mrs. Muir is a classic Romance in how it utilizes classic themes—life, death, longing, loneliness, etc., albeit the story suggests something otherworldly. So, how could this possibly be relevant? Allow me to declare: the Internet.

Today, there is the ongoing possibility of romance existing between two individuals who, due to distance or circumstance, are unable to carry out their relationship in the flesh. So, one is left longing for the other, whilst much of the relationship exists in fantasy. An invitation for loneliness, life is never fully lived for as long as these distant individuals remain ‘together.’

Another excellent film that involves longing is Jane Campion’s Bright Star. It relays the story of John Keats and how his circumstance in life, as well as his early death, prevented him from marrying his love interest. (Interestingly, Captain Gregg quotes ‘Ode to a Nightingale.’)

In both films, we are presented with two relationships where it becomes impossible for these individuals to spend their lives together. And yet, we long for their unions nonetheless—so much so that we too are saddened when they cannot transpire. Odds be damned, why do we do this? Therein lives the Romance.

If you enjoyed this review of Joseph L. Mankiewicz’s The Ghost and Mrs. Muir, consider supporting us and get patron-only content on our Patreon page. This will help the growth of this site, the automachination YouTube channel, and the ArtiFact Podcast. Recent episodes include a survey of photography from Josef Sudek to Laura Makabresku, an examination of Abstract Expressionism as depicted in Kurt Vonnegut’s Bluebeard, and a debunking of Internet sciolists such as Jordan B. Peterson and Christopher Langan.