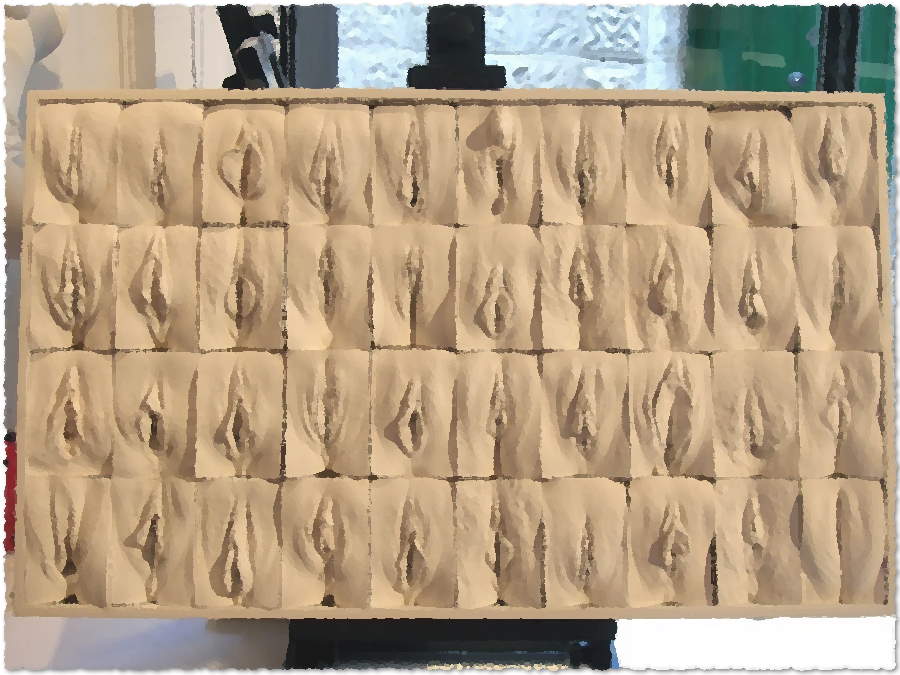 Almost from the moment humans and perhaps our cousins (no longer extant) became fully aware of their bodies and could take the time and make the space from just surviving, the body became a canvas, a pronouncement, a proclamation. The body was used to celebrate, to mark Others, to say things about the world, to admit to the Collective Mind of all we humans that the body was not merely a flesh housing or prison, but an intention, a text, a dialogue, a way of communicating, for good or ill, to all—and to ourselves. It was an extension of the mind, a canvas of signs, a part or who we were. It was not an enemy.

Even with the advent of tattooing, even with those full-body dragons, even with whole murals on a naked back—and even that ubiquitous circle of black thorns on a bicep, we have a statement: this is my body, decorated, alive. Tats went from underworld statements of solidarity, and secret shadow-world announcements only for those in the know or in the life, to being universally accepted as decorative assertions of Whatever, for everyone. Underneath that banker’s three-thousand-dollar suit may lurk some Asian scrolls or cute animated characters. On the left buttock of the housewife in the produce aisle of the local grocery store flutters a colorful hummingbird.

Humans have always done wonderful, innovative things to their bodies, and as technology has evolved, so has the desire of the human mind to expand, the desire to proclaim, to enhance, to shout out to the world, “See me!  See my body!” From making one’s hair the color of a fire in a paint factory, to breasts with remarkable buoyancy and extension, humans are proclaiming the semiotic body. Each iteration was an extension into the world of the companion body, our partner in proclamation. It was not an enemy.

According to the International Society of Aesthetic Plastic Surgery, labiaplasty surgery was up 45% in 2016 over 2015, the largest growth of any cosmetic surgery procedure. Instances of such surgery more than doubled in the first decade of this century, then carried on rising. Perhaps some definitions would now be in order. Labiaplasty is surgery to alter the appearance of the vulva—it is generally done by trying to reduce the size of the labia minora (the inner genital lips) so they don’t hang down past the labia majora (the outer ones). It is not cheap. What accounts for this trend?

There is a sort of self-loathing among women about the appearance of their vulvas (especially women under 50 or so), a trend to revolt against labial perfection, against those neat little clefts seen in classic painting and sculpture, toward an acknowledgement of the normality of what is known on social media as a “fat coochie.” Most women never see other women’s vulvas—the locker-room culture which men have long participated in is still not common  among women, and thus they have little opportunity to observe what is “normal” in the world of vulvas. There is an online woman’s magazine, Refinery29, which polled 3,600 of its readers, which reported that 48% had concerns about the appearance of their vulvas—the size, shape, tautness, and color. So, again, what are the reasons for this relatively sudden turn of events?

At the top of this piece is a picture of a work by artist Jamie McCartney, “The Great Wall of Vagina.” It is a 26 feet-long, 400-plaster casting of vulvas, arranged in 10 panels (yes, he knows the work does not picture vaginas, but vulvas). These panels are grouped under categories such as “Before and After Labiaplasty,” “During and After Pregnancy,” “Transgender: Female to Male.” It was inspired by the increasing signs that women found their bodies to be the enemy of their contentment with themselves. It definitely is a sign of the times.

If you enjoyed Len Holman’s piece on self-image vs. labiaplasty, check out the automachination YouTube channel and the ArtiFact Podcast. Recent episodes include an interview with singer Eva Schubert on writing good songs, an in-depth look at Elizabeth Barrett Browning’s “Sonnets from the Portuguese” with poet Joel Parrish, a philosophical look at kitsch, aesthetics, and NFTs with UK painter Ethan Pinch, and a long discussion on Edward P. Jones’s classic short story collection, “Lost in the City”.

More from Len Holman: Vaccine Mandates vs. Carol Doda, A Nation in Need: Confucius & the Rectification of Names, UFOs & UAPS – The Sky Talks And It Is Us Talking