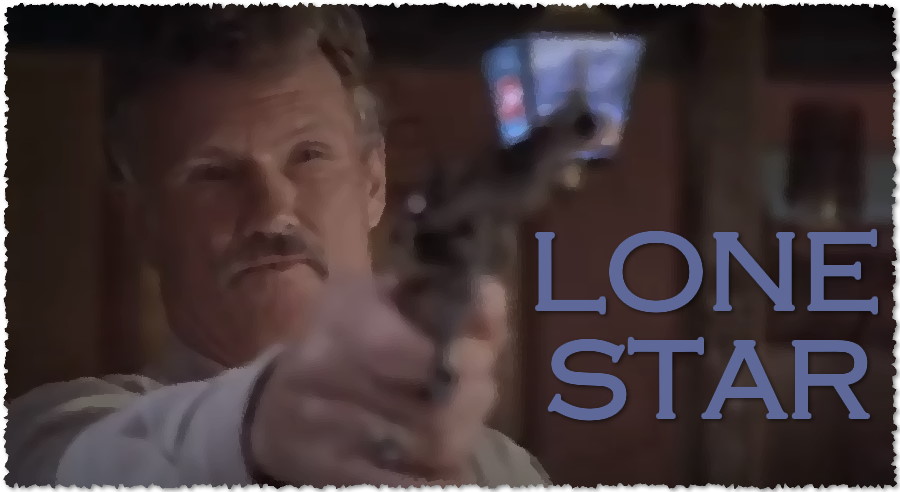 “You joke about it, Sam, but we are in a state of crisis. The lines of demarcation are getting’ fuzzy. To run a successful civilization, you have got to have your lines of demarcation between right and wrong, between this ‘un and that ‘un. Your daddy understood that. He was a – what do you call it? A referee for this damn menudo we got down here. He understood how most folks don’t want their salt and sugar in the same jar.”

At its core, John Sayles’s Lone Star is about such demarcations, and who, ultimately, gets to do the demarcating. It’s also about the oftentimes tense relations between the multi-ethnic populations of a small town on the US-Mexico border, as well as the corruption that stems from evil; and, as if those weren’t enough to handle, there’s enough time for a tender tale of star-crossed lovers. It’s a testament to Sayles’s skills as an artist that Lone Star manages to juggle all these narratives (and more) while still coming across as a coherent whole, its themes bold enough for most audiences to detect their presence but deployed with such subtlety to reward repeated viewings. It’s the above quotation, however, that reveals John Sayles as not only the great American independent filmmaker but one of the medium’s keenest observers of societal conflict, whether it be in urban cityscapes (City of Hope), the colonial tropics (Amigo) or more fantastical, rustic settings (The Secret of Roan Inish). That he puts these words in the mouth of a mildly bigoted bartender, in a moment of seemingly throwaway comedy, shows his attention to detail, as even tertiary characters are given more than one dimension and are treated not as window dressing but as ordinary people with their own wants, aims, and philosophies, despite their brevity. It’s ordinary people, after all, who live among such demarcations, and it’s ordinary people who suffer men like Charlie Wade and Buddy Deeds to administer, encourage and/or expunge them.

This becomes more evident as the different narratives dovetail throughout Lone Star’s 135-minute runtime: a skeleton is discovered on a deserted shooting range, bearing a Masonic ring and a rusted sheriff’s badge. It may very well be old Charlie Wade (Kris Kristofferson), a man whose reign of terror involved embezzling funds, permitting illegal activity as long as a large portion of the revenue circulated into his pocket, and shooting dead anyone who he deemed to be shirking his authority. He vanished shortly after a young deputy and Korean War vet named Buddy Deeds (Matthew McConaughey) challenged him and, upon his disappearance, assumed his position as sheriff. Buddy’s son, Sam, is now the current sheriff, and is put on the case. Buddy is well-loved by the citizenry, and any implication that he may have murdered to get his way would reflect badly on not only his character but the whole town’s: attached as they are to his long-lived virtue. Sam, returned to the town of his birth after a divorce, and given the title of sheriff purely on the reputation of his surname, remembers his father in less forgiving light. He seems hellbent on proving that the great Buddy Deeds isn’t the hero everyone claims him to be. He is a watchful and laconic man, burdened by a complicated history and too world-weary to make much of a fuss about it. (Sam is played by the wonderful Chris Cooper, who acts with attentive ease, never drawing attention to the pretense of his performance). In another film, it would be through his eyes alone that the town and its characters unfold, but John Sayles presents much that is outside of Sam’s awareness. In the nearby Army base, a new colonel is given command of its troops, a straight-collared, “spit and polish man” named Delmore Payne (Joe Morton). He assumes the post with the utmost professionalism but resents having to live near his estranged father, Otis Payne (Ron Canada), the owner of a local nightclub catering mainly to the already small black population of Frontera, Texas. Pilar Cruz (Elizabeth Peña), a teacher and old flame of Sam’s, reenters his life whilst struggling as a widow. Lovers in high school, their union was disrupted by Buddy and Mercedes (Miriam Colon), Pilar’s mother. It’s clear that even after a long separation they’re still powerfully drawn to each other, and much of Lone Star is spent witnessing them carefully reacquaint themselves to their buried emotions. There are PTA arguments over what version of history should be taught in school (something that still resonates over twenty years later); one of the soldiers at the base is interrogated over, and must resolve, her reasons for being in the Army; Delmore’s nerdy, awkward son Chet (Eddie Robinson) tries to set his own course, as Delmore did with Otis when he was a boy; immigrants from Mexico traverse across the border, risking death or imprisonment to struggle anew in a land that is undeniably hostile to them but too full of opportunity for this to matter.

How these threads tie together, exactly, is better experienced by the viewer than explained here. The ensuing drama centers around Sam unraveling the mystery of the skeleton, but only for the audience’s sake. The mini narratives branching out from the main give a realistic fullness to the proceedings, with the implication that Sam’s journey is a semi-important thing happening in the background of the other characters’ lives. One gets the sense that if John Sayles wanted to, he could have picked another of the narratives to focus on without sacrificing any depth. Never a director with a distinctive visual style (a la Malick, Tarantino, Fincher, etc.), it is Sayles’s writing that shines here, as in all of his films. They are character-driven and concerned less with action as with motivation. The plot of Lone Star has all the makings of a potboiler thriller, or a platitudinous Hollywood race drama, but Sayles digs past the sensationalism of the plot elements and asks: what brought these people to this moment in their lives, and given their backgrounds and unique psychologies, how will they find resolution for themselves? This allows the larger, meta-narrative dealing with power relations mentioned earlier to grow subtly, through the interactions of the characters rather than plot contrivances. 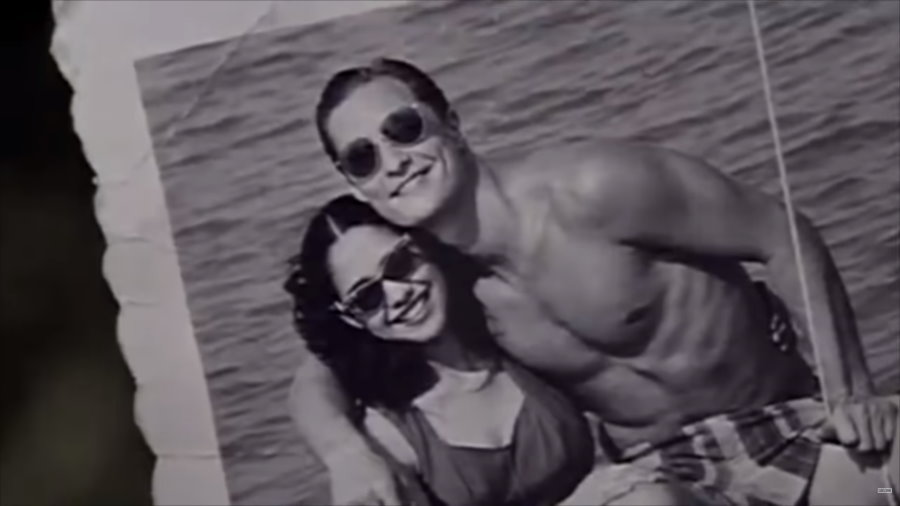 What of those power relations, then? Sayles is clearly interested in the father-son dynamic, whether it’s with Buddy/Sam, Otis/Delmore, or Delmore/Chet. Attached to that is the perpetuation of cycles, and the choice of a given authority to either further perpetuate it or break away. Sam’s vision of his father as a corrupt official clashes with most of the townspeople’s, who were more than willing to look past his dishonesty due to how much nicer he was in comparison to Wade; despite the fact that Buddy, for one, kept much of the city’s segregation in place for the sake of “civility.” These cycles take on the primal power of a Greek tragedy when, near the end, a disturbing fact about Sam and Pilar’s relationship comes to light, and they must make a choice by themselves and for themselves, as adults – however burdened by the mistakes made by the authorities in their childhood. Lone Star, like many Sayles movies, puts a spotlight on the tensions between cultures, and how such tensions create (not destroy) society. Civilization is about demarcations, but those demarcations constantly veer, thin/thicken, and can sometimes mean as much as a line shakily drawn in a patch of dirt. Whether the line is drawn by a hand of peace or one with violent intent is often unclear and often dependent on the shared history of those on either side of the line.

While it’s true John Sayles isn’t primarily known for his visuals, that doesn’t mean he lacks visual command: any survey of his films should show him to be adept with pacing, staging and, most importantly, editing, the raison d’etre of cinema. Consider the many low-angle shots of Charlie Wade, to make him appear larger than his already imposing stature, matching the frightful recollections of the townspeople, towering over even their memories. In one scene, Sam resists the urging of two city councilors to back the construction of a new jailhouse. The situation quickly defuses, as they are heading to a public event, but Sayles then cuts to a desk full of spent bullet casings, where two hobbyists are at work. The edit, on a basic level, transitions the story to an important plot point – the hobbyists finding a bullet from the murder site that matches the gun of Buddy’s choice. But the cut also underlines the history of conflict between Sam and the bigwigs who gave him his badge, and perhaps even the veiled threat of his removal if he continues to buck against their machinations. One of the best technical tricks of Lone Star is how Sayles transitions between events of the present-day and flashbacks: he simply places past and present characters in the same shot, so the movement of the camera from one to the other contains no visible cut, and further strengthens the idea that the troubled history of Frontera hasn’t really left its inhabitants, lending credence to the famous William Faulkner line: “The past is never dead. It’s not even past.” The same goes for Lone Star, which – along with Sayles’s status as a consummate writer, director and editor – will endure long after the many weaker attempts at human drama calcify in the dust.

If you enjoyed this review of John Sayles’s “Lone Star”, consider supporting us and get patron-only content on our Patreon page. This will help the growth of this site, the automachination YouTube channel, and the ArtiFact Podcast.