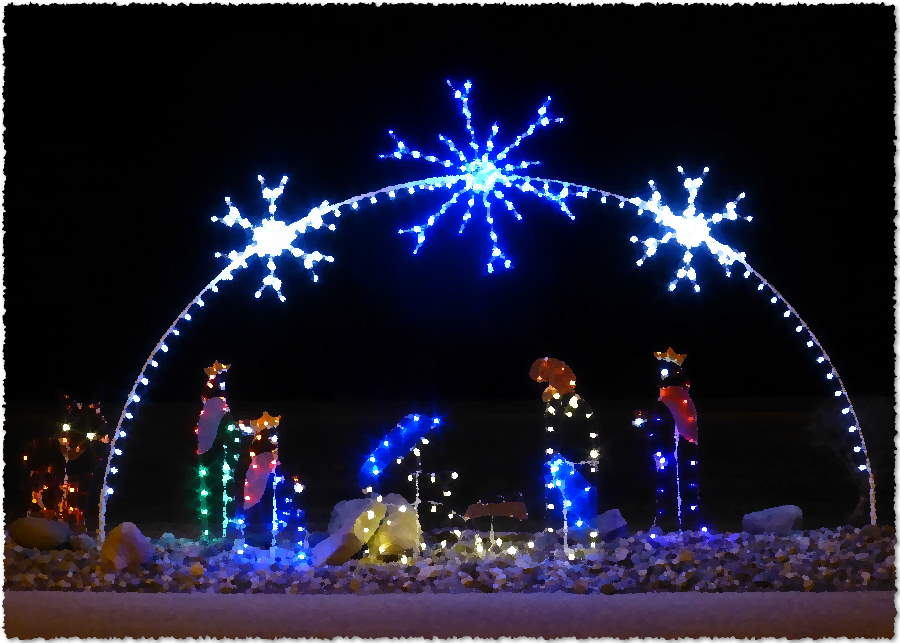 Luke 2:1 – 24 is the prophet Luke’s story about the advent of Christmas. But much more than just a factual account it is a story told artfully. This is especially true if we are talking about the King James version of the Bible.

“And it came to pass in those days, that there went out a decree from Caesar Augustus that all the world should be taxed.” Thus begins the story. It’s not, ‘Caesar decided to tax the folks.’ Luke sets the scene for a magnificent story to follow. Yes, it’s factual, but choosing those words, “all the world should be taxed” is a grandiose scheme by a king. What could top it? And we know what will outshine it.

In short order we are introduced to two of the major players, Joseph, a descendant of King David, and Mary, his betrothed who is with child. Our attention to Caesar is immediately upstaged by these two partially because King David plays a major role in the Old Testament and it has been prophesized that from his lineage a Savior will come. Luke calls Mary “his espoused wife” to flavor a nuance of the Virgin Birth. Expectations abound.

“And so it was, that, while they were there, the days were accomplished that she should be delivered.” Hear the music of that. Something as everyday as childbirth is elevated to a major accomplishment. It is recognized that most people who are reading this account, are at least vaguely familiar with the story, but reading lines like that are a shot in the arm especially for believers.

Then Jesus is introduced as her firstborn son, but not even named, and of all things he is laid in a manger because there is no room at the inn. Ponder on that a while. The Man who is more famous in today’s world than even John Lennon had the most humble of beginnings. That’s got to give hope to countless numbers of poor people who wonder if they’ll ever amount to much. You don’t need to even be a believer to be affected by that.

Then skip to the shepherds who are watching over their flocks of sheep at night, not day. We all know Jesus as the Lamb of God. The story becomes miraculous with the intervention of an angel and the shepherds are filled with fear, not the usual reaction to the birth of a child which the angel proclaims. The angel immediately chastises them for being fearful and say they should be joyful instead because a Savor has been born. Then we get the name, “Christ the Lord” and a multitude of angels appear praising God and proclaiming peace and good will towards humanity. Is there a higher level of hope possible?

Dutifully the shepherds seek out Jesus, find Him, then begin to spread the word which causes people great marvel. The story is carefully layered to peak the emotions and prepare the reader for a miraculous life. The ball is rolling.

But then we find Mary pondering these things in her heart. You want a strong woman; you’ve got one. She’s not Joan of Arc type strong; she’s a mother-strong which most of us can testify is the strongest feeling there is. In spite of all that’s happened, Mary keeps it together. The shepherds return and we have the perfect scenario of how a baby should be received into the world – with hushed joy.

“And when eight days were accomplished for the circumcising of the child, his name was called Jesus, which was so named of the angel before he was conceived in the womb.” Finally, Luke gives us the name, Jesus. He sure waited a long time hoping we’d be patient.

Then Jesus is brought to Jerusalem to be presented to the Lord. This could confuse non-believers who might say, “I thought Jesus was the Lord?” But for believers this is step one in living out His mission all the way to the cross once again in Jerusalem.

The story closes with the account that there must be a sacrifice of a pair of turtledoves or two young pigeons. The sacrifice of birds may be unpalatable to some; nonetheless it sets the tone for the innocent sacrifices Jesus is called upon the make in His lifetime.

There you have it. Twenty-four verses telling one of the greatest stories ever told. And so artfully. There’s drama, intrigue, magnificence, mystery and more. If we can ever do justice for the life of Jesus, Luke starts us out on the right foot.

I hesitate to get into comparisons, but I personally find the story told in Luke to be superior to Matthew’s account. For one thing, Matthew’s story is briefer. It lacks all of the elements of Luke’s that made Luke’s story so great. It is just a factual account with no frills.

All told, the question arises, do you have to be a believer to enjoy the account of Luke. I think from a purely objective stance, it is a great and artfully told story which all people can enjoy. It has literary merit independent of what you believe about Jesus. But if you are interested in Jesus it is so much better. For those who accept Him as a Savior, the story is both edifying and awe-inspiring.

It must have been difficult for Luke to create such a grand picture of Christ’s birth in view of what eventually happened to Jesus. How could something so beautiful end so tragically? That could be a view taken. However, for a believer, the cross is not a tragic ending. It is Christ forgiving us and pointing the way to heaven. Is this grandiose? Absolutely. Delusional? I think not.

More from Bruce Ario: I Want to Make it Big: Analyzing Bob Dylan’s “Blowin’ in the Wind” & “I Contain Multitudes”