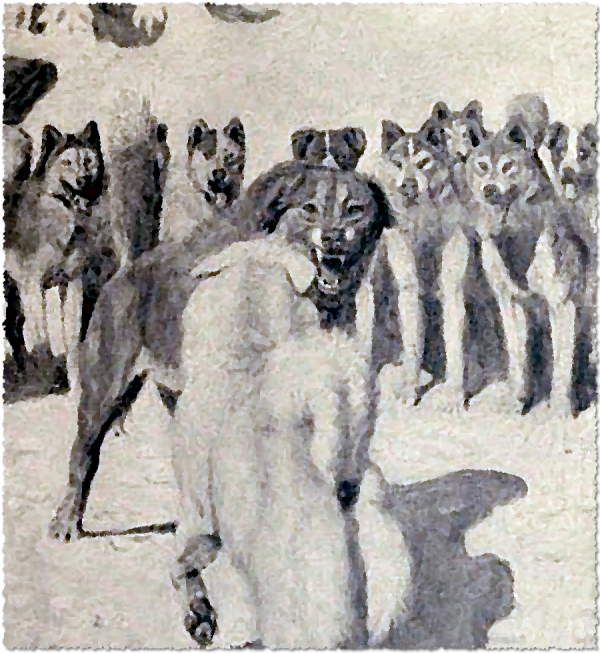 Jack London’s The Call Of The Wild refuses to anthropomorphize its main character, a powerful St. Bernard–Scotch Collie mix named Buck. It has more in common with Robert Bresson’s Au Hazard Balthazar than it does with something like Bambi. Chronicling the experience of this animal in an unadorned manner, it is partly why the novel has aged so well.

In many instances, Jack London writes how Buck “did not think these things, he merely did them.” In so doing, he highlights how much the creature relies on instinct as opposed to intellect. There are no phony attempts to turn the animals he portrays into cartoons. When considering this, the reader is awed by how interesting and engaging the story still manages to be. If one manages to make a book about a dog this moving, one should be considered, at least, an excellent writer.

That is not to say The Call Of The Wild lacks humanity. Instead, it shows the reader how many things we consider human go far beyond our species. The reader follows Buck as he undergoes his character arc, changing between owners, some good, some bad, adapting to each circumstance until he answers the titular call of the wild. There is pride, jealousness, and love in the members of this cast of dogs, just as there would be in a more civilized cast of characters. Because of this, the narrative serves as a mirror to impulses humans find in themselves.

At the beginning of the book, our hero is the spoiled dog of a judge living in California until the dog is kidnapped and sold by an assistant gardener. Buck is shipped to Seattle, and when the crate containing him opens, a man introduces him to “The Law Of Club And Fang.” In a rage, the dog springs upon his captor, and the man counterattacks with a club. This exchange goes on a few times until Buck realizes his disadvantage. He decides to bide his time and obey the man with the club until he has an opportunity. What Buck learns in this chapter echoes throughout the rest of the book, showing the focus London has on the central themes of the narrative. The 27,976 words never lose sight of their purpose, each outlining a pivotal step on Buck’s evolution – or devolution.

The rest of the narrative unfolds similarly. London may offer the reader moving sequences, but these are always subordinate to a greater, underlying purpose. Take, for example, the duel between Buck and an older dog named Spitz. After being sold once more, Buck ends up in Alaska and develops a rivalry with the alpha of his new pack, Spitz, who feels the newcomer compromises his position. This tension climaxes in a fight, and even as Jack London manages to instill the duel between the dogs with an exceptional thrill, all this action remains a backdrop to Buck’s character development.

For instance, although there are moments of great poetry throughout the text, wherein the writer exhibits the dominion of music and imagery in his prose, these are always employed as ways to better articulate the character’s state of mind. Before the dogs fight, Buck chases a rabbit he means to devour and grows enthralled by the excitement of his new life:

There is an ecstasy that marks the summit of life, and beyond which life cannot rise. And such is the paradox of living, this ecstasy comes when one is most alive, and it comes as a complete forgetfulness that one is alive. This ecstasy, this forgetfulness of living, comes to the artist, caught up and out of himself in a sheet of flame; it comes to the soldier, war-mad on a stricken field and refusing quarter; and it came to Buck, leading the pack, sounding the old wolf-cry, straining after the food that was alive and that fled swiftly before him through the moonlight. He was sounding the deeps of his nature, and of the parts of his nature that were deeper than he, going back into the womb of Time. He was mastered by the sheer surging of life, the tidal wave of being, the perfect joy of each separate muscle, joint, and sinew in that it was everything that was not death, that it was aglow and rampant, expressing itself in movement, flying exultantly under the stars and over the face of dead matter that did not move.

Spitz ends up taking a shortcut and killing the rabbit before our hero, who drives into his rival and starts the expected confrontation. In this manner, Buck approaches the wild nature referred to in the book’s title. This is why the chapter works as more than just a well-wrought spectacle, as Jack London further advances Buck’s character arc.

Eventually, Buck manages to defeat Spitz, and yet, throughout this character growth, the dog never feels like anything more than an animal. Even when he manages to beat the more experienced Spitz, Jack London makes sure to highlight how Buck seems to remember how to fight instinctively, rather than implying he figures it out by reasoning. As mentioned earlier, this commitment is one of the foundations for the book’s success. Not only does this choice permit the reader to engage with the narrative without needing to suspend disbelief, but it also makes for a more intriguing story since exploring how an animal perceives is far more compelling than forcing a human outlook onto the creature. Whereas anthropomorphizing tends to feel like a strained attempt at making the subject matter more accessible, this stripped-down approach inspires the readers to think about the differences between their species and another.

And yet, when the fight concludes, the reader realizes this choice is only part of a more significant commitment. After Buck renders Spitz defenseless, London describes how the circle of huskies closes in on the injured dog to finish him off, and he does so without embellishment. Not only does London avoid excessively humanizing his characters, but he also refuses to hide the brutality of the world they inhabit. It is because Jack London avoids pandering in any way that The Call Of The Wild retains the ageless quality that unadorned records of a certain time and place tend to acquire.

As the story progresses, we follow Buck as he is sold to the mail service, then to a trio of inconsiderate southerners, until he ends up under the care of an outdoorsman. Throughout, London remains resolved on articulating the northern wilderness in a mildly decorated manner. Eventually, Buck becomes a wolf pack leader, and his legend spreads among the nearby natives. The writer lets the reader decide whether this is a good thing, a bad thing, or a bit of both. It is mainly because Jack London remains determined to articulate a reality that refuses to be pigeonholed that The Call Of The Wild succeeds. This is the sort of novel one might read as a child, only to revisit it in a much more profound light as an adult, and so it is the sort of book one should read, considering how few works can boast of such intricacy.