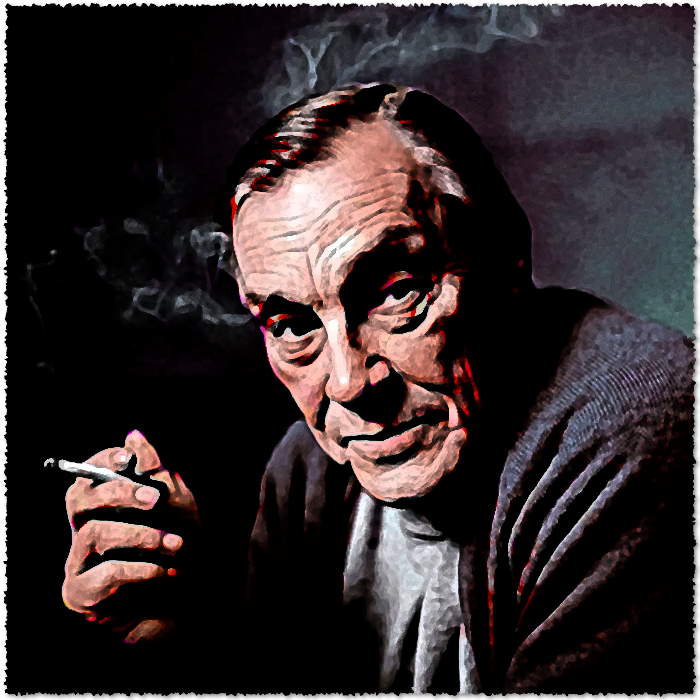 As someone with an affection for the films of Andrei Tarkovsky, I was eager to finally meet his father. I met him momentarily within Andrei’s 1975 film Mirror, but we barely got acquainted. Arseny Tarkovsky (1907-1989) held a huge place in his son’s life. And like with Jean Pierre Renoir, here we have another father-son dynamic wherein both are artists. Andrei admitted that his father’s work had a huge influence upon him, and how fortunate is that? To have a father who not only encourages the arts but also is an artist himself? In watching many interviews with Andrei, it is clear that he was a very sensitive soul. He loved his father—and because his father’s work held such impact in his life, he chose to honor him by using his work within his films. As example, take this poem from I Burned at the Feast: Selected Poems of Arseny Tarkovsky (translated by Philip Metres and Dimitri Psurtsev), which is set against one of the more famous scenes within Mirror:

I don’t believe in omens nor fear
Foreboding signs. No poisons or lies
Will strike me down. There is no death on earth;
Everyone’s immortal. Nothing will die.
There’s no need to fear the end—at seventeen
Or seventy. There’s only this life, this light
On earth; there’s no darkness or death.
We’re all already on the seashore,
And I’m one of those who hauls in the nets
When immortality swims past a shoal.

This poem concludes after two more sections and for brevity’s sake I have only included part one, which is included within this Selected Poems edition. As contrast, here is the online version of same verse (translator unlisted):

I don’t believe in omens or fear
Forebodings. I flee from neither slander
Nor from poison. Death does not exist.
Everyone’s immortal. Everything is too.
No point in fearing death at seventeen,
Or seventy. There’s only here and now, and light;
Neither death, nor darkness, exists.
We’re all already on the seashore;
I’m one of those who’ll be hauling in the nets
When a shoal of immortality swims by.

One can see the variations in phrasings and syntax. Aspects of both poems have their strengths and weaknesses, but since this isn’t an essay about the pros and cons of translation, I will instead encourage all to watch the clip from Mirror, where the film’s images enhance this poem.

Arseny Tarkovsky is not a great poet but he is one that younger poets should read, as there are many ideas to glean within. As a bit of background, Arseny Tarkovsky held a correspondence with Marina Tsvetaeva. Ten years his senior, she seemed to crave more than friendship from him. (Yet a romance never seemed to transpire.) The introduction to his Selected Poems sadly mentions the 41-year-old Tsvetaeva working as a dishwasher before her eventual suicide. (When will the Greats ever be appreciated in their lifetime?) Here is one of his poems inspired by her:

I call, but Marina does not reply. She sleeps today
so soundly in Yelabuga. Yelabuga, cemetery clay,

You should be called a god-forgotten bog.
At your name, like a bolt, the gates should be locked.

Yelabuga, you’d have no trouble scaring orphans.
Swindlers and robbers should lie in your coffins.

On whom did you breathe your fierce frost,
becoming her final earthly rest?

Whose swan’s cry did you hear before dawn?
Tsvetaeva’s. You heard Marina’s last word.

I’m freezing in your cemetery wind.
Cursed, spruce-stabbed Yelabuga, give back Marina.

The poem, as contained in a sequence, plays homage to Tsvetaeva’s work. (Tsvetaeva is known for her many poems in sequence, most notably on other poets.) Written after her death, Tarkovsky details the stark imagery of Yelabuga, as he curses the location of her death directly: ‘You’d have no trouble scaring orphans/ Swindlers and robbers should lie in your coffins.’ The poem is not difficult to follow but it gives an insight into the passion he must have felt, then. Once again, some variations of syntax can be made depending on translation.

Now, here is one of Arseny Tarkovsky’s early poems, dated 1937:

There’s no one here
But me. A portrait on the wall—

I ask: Is it nice
Under the glass, in your paradise?

Down her cheek, a fly climbs.
The old woman replies:

And you there, in your home—
Do you like being alone?

This is an interesting poem that poses an unusual scene. The speaker claims to be the only person in the room. The line break at ‘But me. A portrait on the wall—’  can read the speaker as both an individual as well as the literal portrait on the wall. Yet, then when the speaker mentions the ‘blind woman’ within the portrait, they share an exchange. The speaker then believes the woman is in a sort of ‘paradise’ while beneath the glass—protected from the very fly that climbs down her face. Both the speaker and the woman are alone, save the fly that climbs across her face. This is an intricate poem—and a short one—that one must read multiple times.

Yet here is another poem that reveals some strengths and weaknesses herein:

The Night Before the First of June

And while the last notes of the last
loud nightingales continue to glide
and the pink foam of hawthorn
gleams like dawn at your bedside,

while the train bridge lies down
under the wheels, a suicide,
and my life flies headlong
above the river’s black rippled bed –

sleep, as if on stage, in your glade.
This night is briefer than your love.
Sleep in this fairy tale, in this night
hive, in memory’s woods.

Now I’ve become whom I was meant
to be. With each new day, each day is dearer.
With every night, my judgment of fate
grows even more skewed, severe.

The first stanza has some cringe-worthy clichés, as noted in the ‘gleams like dawn at your bedside.’ Yet the second stanza has more interesting imagery with, ‘under the wheels, a suicide.’ (While he is seemingly attempting to evoke a fairy tale, the images ‘gild the lily’ so to speak.) Again, this could possibly be due to erring in translation but I doubt it. Instead, I am going to offer a slight revision:

The Night Before the First of June

while the train bridge lies down
under the wheels, a suicide,

sleep, as if on stage, in your glade.
This night is briefer than your love.

Sleep in this fairy tale, in this night
hive, in memory’s woods.

Now I’ve become whom I was meant
growing even more skewed, severe.

I eliminated much of the excess melodrama and instead allow the images to play off themselves. Is this a perfect poem? No. Is this the best revision? Probably not, as it is only a suggestion. Had Arseny Tarkovsky sent me this poem, this is what I would have offered. Yet my point is that Tarkovsky, while showing some weak wording, offers ideas that could potentially lend themselves into better, more developed ones.

Now onto the final poem, which is part of a sequence:

Like a tree in forest underbrush
spreads out its leafy hands
and, leaning on a shrub, propagates
its branches sideways, widthwise –
so I shot up, adagio. My muscles
swelled, my rib cage expanded,
my lungs filling with the prickly wine
of a sky-blue chalise, down
to the alveoli, and my heart
borrowed blood from the veins and
returned it and took the blood again,
and it was like a transfiguration
of simple happiness and plain grief
in a prelude and fugue for organ.

Once again, this is not a great poem but it does offer some unique ideas. A tree becomes human-like and carries some well-wrought music within. (Yet I would have changed ‘leafy’ to ‘leafing’ as to echo the sound heard in ‘leaning’.) Hands, branches, sideways, widthwise—/so I shot up, adagio.’ (Note the good music here.) Then, he moves into more obvious imagery—‘swelling muscles,’ ‘expanding rib cage’, ‘sky-blue’, but then he grounds it by returning to the physical ‘alveoli.’ Blood from the heart is ‘borrowed’ and then ‘returned’ as it ‘took the blood again’.

of simple happiness and plain grief
in a prelude and fugue for organ.

The only mention of emotion is in the ending, and there is a distance present, as though he is analyzing it after the fact (hence the title—After the War.) Thus, Tarkovsky’s poems are not perfect and nor are they supreme masterworks, but they do offer seedlings from which young writers can glean. It has often been said that one learns craft not necessarily from the Greats, but the near misses. So one must not dismiss those efforts of almost, because it is within those almost efforts where craft thrives. Arseny Tarkovsky: this has been an introduction.

If you enjoyed this review of Arseny Tarkovsky’s I Burned at the Feast: Selected Poems, consider supporting us and get patron-only content on our Patreon page. This will help the growth of this site, the automachination YouTube channel, and the ArtiFact Podcast. Recent episodes include a survey of photography from Josef Sudek to Laura Makabresku, an examination of Abstract Expressionism as depicted in Kurt Vonnegut’s Bluebeard, and a discussion of Hermann Hesse’s classic novel, Steppenwolf.