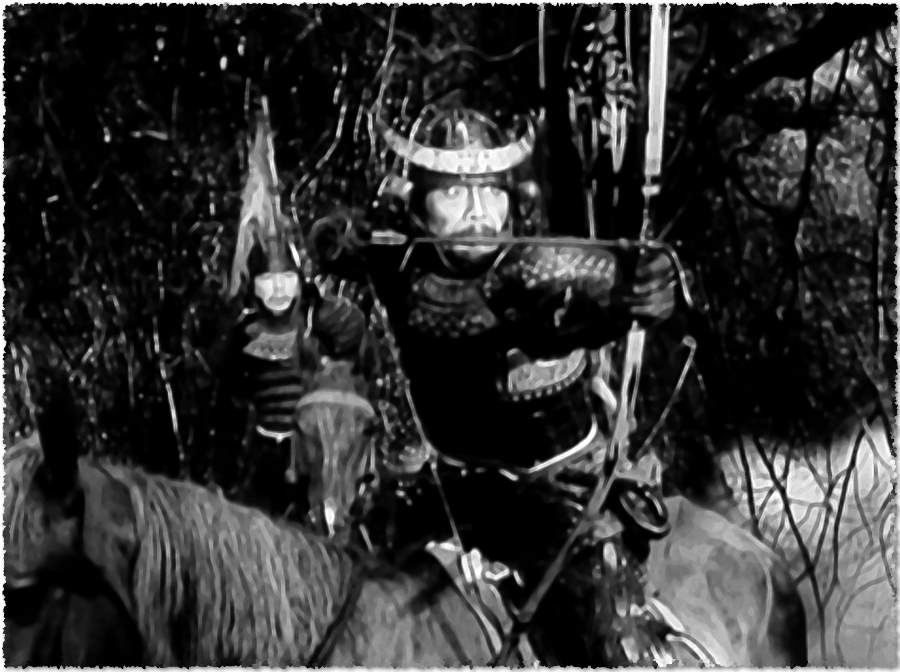 The difficulty in transcribing Shakespeare is in the stylistic qualities. Shakespeare’s characters and themes are endemic to culture, so a straight adaptation risks being old-hat. This necessitates either a gimmick like Baz Luhrmann’s insufferable Romeo + Juliet, with its .45 calibre thumb-biting, on the one hand, or potent cinematography on the other. Throne of Blood (Kumonosu-jō) by Akira Kurosawa is widely held to be the best adaptation of Macbeth, and is in the latter category of cinematic potency. While the context is moved to feudal Japan, the real elevation of its source material occurs in its ethereal, dream-like and unsettling atmosphere.

Adaptation can fall flat when the focus is purely on transferring the plot of the source material – what makes a great adaptation can be found in retelling a story using a different toolset and collection of stimuli. By translating a work of dramatic prose, you have to eliminate statements and replace it with implication, and texture. This is true in all the widely regarded great adaptations, from The Shining and Apocalypse Now to Naked Lunch. While keeping the elusive soul of the work alive, they can’t ever hope to imitate its manner of expression. That’s where the director’s own proficiency comes into play and becomes pivotal.

And this is where Throne of Blood shines – in its recognition of the vital qualities and the complete exerting of its own voice over the tertiary qualities. Kurosawa recognises the strength of acting required from each player and gives them ample room to manoeuvre. The camera floats lazily, some beautiful shots including the Lady Macbeth analogue, Asaji, walking from shadows with a basin of poison. By allowing a still and uninterrupted capture of an actor’s performance, it almost stimulates a different lobe of the brain from normal cinema-imbibing. There’s the unreal, and the real, and the highest achievement of the movies is to make the former feel like the latter.

This is part of Kurosawa’s wider portfolio – he likes to capture movement most pivotally, from the wind rustling the trees, to rainfall, to snow, to fire. This extra ingredient within his shots gives the cinematic audience something visual to latch onto in slow scenes without much dynamism from the key-players. He lets the camera linger on an actor, but pivotally he demands exaggerated physical performance from them. If an actor in a Kurosawa movie is outraged they will stand bolt upright, if they are ashamed they will curl into the foetal position. This functions especially well within the narrative of a Shakespeare play, where the extremes of emotion are commonplace and vital to the work.

While Kurosawa can appear aromantic about actors by his tight control of their expressions, his return to Toshiro Mifune in Throne of Blood as leading man shows he recognises the strength to be gleaned from an actor’s skill. Mifune’s turn as Washizu Taketoki is amongst his best, and that’s because Mifune can turn Kurosawa’s demand for the extreme into something still deeply human and vulnerable. Washizu’s meltdown where he inadvertently reveals his assassination of Miki, the ‘is this a dagger I see before me’ moment, embodies not only the sorrow that Washizu has brought unto himself, but also shows Asaji the depths to which she’s broken her husband – by virtue of that, Washizu also had to show a gutteral and pathetic element, which Mifune easily manages.

Lady Macbeth is often more important a casting than the man himself, and Isuzu Yamada with that in mind was an ideal choice. Mifune excels when his characters come from a place of intensity and passion, so offsetting that with the icy exterior of Yamada was a masterful stroke. This dichotomy between the two is due to one of the few textual changes to the character’s motives, in that the eponymous married couple in the original Scottish play are passionately in love. That reassuring crutch isn’t to be found in Throne of Blood – their marriage is bitter, and distant, and their lack of children speaks to an unresolved conflict or tragedy. This culminates in the catalyst for the devastating final half hour, and Asaji is the lynch-pin of all of that.

Some adaptations are so narrowly focused on doing justice to the text, or adding historical fun-facts, they lose the important qualities of cinema. Throne of Blood revels in these qualities, and heavily connotes how much thought old Akira put into the project. Some of the cultural translations are not only to make sense within the transplanted context, but also add their own texture not present within the original play. The three witches scene is so widely known and bastardised that it’s hard to take seriously – the notion of a kami, or forest spirit, is the first translation to come to mind when moving to the feudal Japanese setting. The way that Kurosawa then turns that larval concept into an unsettling exhilaration is something else entirely – the elderly female actor is dubbed with a deep, distorted voice, the spinning wheel provides a minimal amount of movement to an otherwise eerily still shot and posture, and the wind through the trees and the flickers of fire-light almost make the spirit the calm epicentre of all the activity. Using practical, well-composed cuts to give the illusion of the spirit disappearing and reappearing is still genuinely creepy, and could teach modern horror brats a thing or two.

His background as a visual artist can be clearly felt like a heavy shadow over the production, and that is the principal element of what I took away from the movie. Using relatively little dialogue in comparison to Shakespeare’s trademark soliloquies is a bold choice, but that’s how Kurosawa communicates with the same artistry and expertise. Everything that could have been told to us in a soliloquy is gestural and visual, each frame an aggregate of different sensuous experiences. It sounds like a super basic point, but it’s the difference between adaptation and recapitulation. The act of transcription can itself be its own distinct artwork, and by treading that difficult line Kurosawa adds another gem to his impressive canonical sceptre.

The bard is often adapted as a sign of hubris, or by corporate mandate. A lack of intellectual property is the toxic element, in a way, despite in an ideal world that being a ubiquitous feature. When something is free to acquire, the name-recognition = generous box office returns equivocation seems incredibly tempting. This is why most fail, as they often display a lack of clear understanding of why Shakespeare is so celebrated. In Throne of Blood, Kurosawa demonstrates respect for another artist through reinterpretation. This and Ran make an impressive double-feature, one refreshingly unlike seeing a mediocre performance at your local college campus.

If you enjoyed this review of Akira Kurosawa’s Throne of Blood, check out the automachination YouTube channel and the ArtiFact Podcast. Recent episodes include a dissection of Kurt Vonnegut’s classic novel, Galapagos, a philosophical look at kitsch, aesthetics, and NFTs with UK painter Ethan Pinch, and a long discussion of photography from Alfred Stieglitz to Fan Ho and Vivian Maier.

More from Marc Magill: On Stimulation: “Koyaanisqatsi: Life out of Balance” by Godfrey Reggio (1982), Debase, Acquire: On Bela Tarr’s The Turin Horse (2011), Art of Momentum: On “Magnolia” (1999) by Paul Thomas Anderson