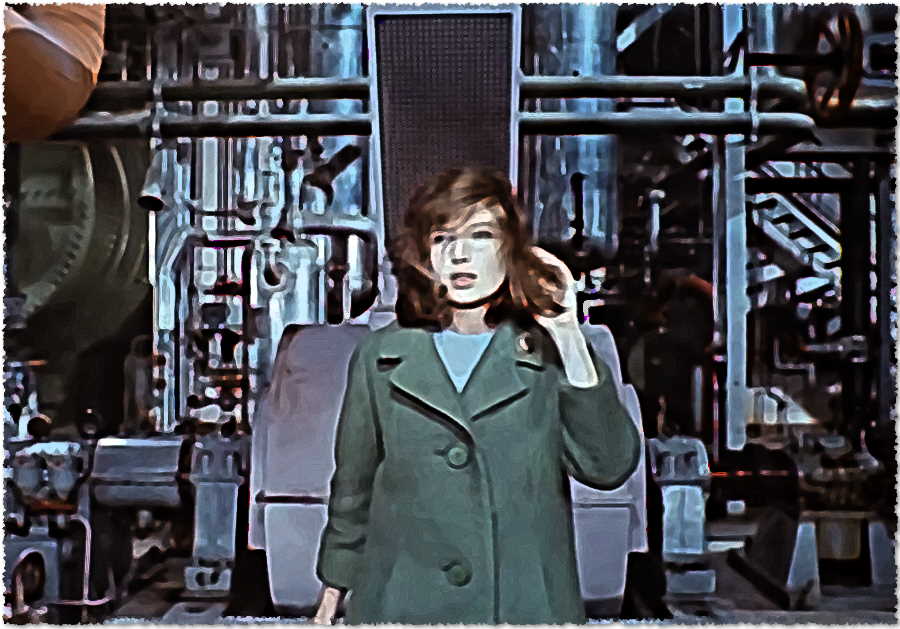 Prompted by the recent death of Monica Vitti (1931 – 2022), on a day my city shut down due to inclement weather, I re-watched Michelangelo Antonioni’s Red Desert. Outside, the streets iced into the night and through the blinds, I noticed that the sky glowed white. I then got to thinking that the notion of human seemed absurd, as who are we to battle nature? We hunker in our houses under heavy blankets in our defense against the outside. We are newcomers to this planet, after all. We arrive and then we depart, hoping that our presence has made some sort of impact.

Red Desert might be the most (anti-)nature film ever made. Set amid the grime of industrial plants, pollution, metal wire, and murky water, only the sky and wind remain intact. But that doesn’t stop humans from polluting it. ‘Why is the smoke yellow?’ the boy asks his mother. ‘Because it is poisonous,’ she replies. Monica Vitti plays Giuliana—a young mother who is undergoing trauma from a previous accident. Her husband, Ugo (Carlo Chonetti), works at the industrial plant she visits. It is a dirty and inhospitable wasteland, where grit and grime are the norm and where colored smoke fills the sky. She visits one day while the plant workers are on strike. Upon witnessing a man eating a sandwich, she offers to buy it even though he has already bit into it. Confused and fragile, something is amiss.

Richard Harris plays Corrado—one of Ugo’s colleagues—in a dubbed role. Upon meeting Giuliana, he takes an instant attraction towards her, despite her nervous mental state. His eyes remain longer upon her than they probably should, especially given that she is someone else’s wife and mother. But that’s just it, isn’t it? Who is Giuliana, amid this detached, unemotional world? Everything around her is hostile—the land, the architecture, the air and even the people. At one moment, even her son lies to her about his inability to walk. ‘I need him more than he needs me,’ she admits. Granted, it is not that anyone is outwardly cruel per se, but indifferent. In one scene, a group of Ugo’s colleagues and friends visits this dilapidated cabin located near an industrial docking station. They joke and engage in mindless sexual chatter, only to then rip apart the already broken wall for firewood. Burning it, we see that everything is ephemeral and awaiting its own demise. Then, in one of the film’s most striking scenes, they stand outside on this cold, damp day only to be dissolved by fog—becoming—in effect—vapor, immaterial.

Likewise, Giuliana’s home is full of faux futuristic decor of the 1960s era—metal stair handles and stiff, uncomfortable chairs. The walls are white and have a flattened aura. Gone is the warmth and welcoming flair of atmosphere and rugs. No one seems to feel much of anything, save for Giuliana, who feels perhaps too much. In a vulnerable admission, she mentions a previous suicide attempt. ‘I wish everyone who cared for me could build a wall around me,’ she says to Corrado, before he seduces her. And Corrado, despite his initial passivity, is ever so willing to take advantage of this fragile woman, who happens to also be his colleague’s wife. In Red Desert, people move about without consequence. Humans fill the air with toxic vapor and they don’t care. When Giuliana’s son asks if birds will die if they fly into the fumes, she informs him that they will learn to fly elsewhere. What a metaphor this is with regard to nature’s battle vis-à-vis human intrusion.

In perhaps Red Desert’s most famous scene, we are given a glimpse into Giuilana’s mind. Upon her son asking her to relay a story, she tells him the tale about a girl who regularly visits an uninhabited beach that is populated with wild rabbits, seagulls and pink sand. There, the young girl peacefully swims alone and she prefers it, as she feels that people pretend to be older than they are. Blue water and flesh-like rocks engulf her lovingly. Then, one day she spots a ship with no one aboard. It arrives, only to depart just as quickly. What is this noise, this singing she hears? Overwhelming, the sound fills her. ‘Who was singing?’ her son asks. ‘Everyone. Everything,’ she replies.

This scene is not only important, but an example of an artist tapping into his Negative Capability. John Keats devised this term as a way of explaining an otherwise illogical leap that makes sense only afterwards. While narratively this diversion enters as part of her son’s bedtime story, on the surface it appears out of place. Why would this otherwise beautiful and natural world—one that is inhabited by creatures and color, enter into this film that is set amid the industrial toxicity of the current age? Granted, beauty is a matter of perspective, but the girl is the only one on the island. And the ship carries no people. But her peace is disturbed upon sight of it, regardless. Just what might this environment be without the intrusion of humans? Also, it appears that humans are intruders even at our own destruction. The world has become inhospitable. Yet now, much like the birds that avoid the poisoned smoke, we need to avoid ourselves.

This glimpse into Giuliana’s fantasy contrasts the harsh landscape around her. She is fragile and sensitive, as though her skin has been removed. Everything affects her. Antonioni said that he chose the title Red Desert to imply the absence of love or passion. This is a theme to which he is no stranger—as he expresses it most notably in his Alienation Trilogy. In L’Avventura, a woman on an island goes missing, only for everyone to ultimately go about their lives as though nothing has happened. Likewise, in La Notte, we witness the disintegration of a marriage, wherein a married couple exists separately, as they spend most of the film apart.

Monica Vitti died at age 90, but on the screen, she appears as though she will live forever. Before her work with Michelangelo Antonioni, Vitti was most known for her comedies. In interviews, she is gregarious and outgoing—quite the contrast from her characters within his films. As example, Giuliana feels alone and reacts impulsively. She rarely laughs. Desperate to be cared for by someone, she remains separate from this harsh terrain and yet she is still part of it. What does one do when even the inside does not feel safe? Outside, smoke fills the ether, wherein it pollutes and dissolves into nature. All around, flesh does not belong here—everything is artificial. Life intrudes on non-life—sludge, dregs and drudgery fill this man-made void. Who can blame her for wanting to escape? ‘There is something terrible about reality but no one will tell me,’ Giuliana admits. She does not belong here, as the fragility of her flesh and her delicate motion remain alien from those around her. So, she has built herself into an island—one that is peaceful and pink and uninhabited, where the rocks resemble flesh and the air always sings.

If you enjoyed this review of Michelangelo Antonioni’s Red Desert, consider supporting us and get patron-only content on our Patreon page. This will help the growth of this site, the automachination YouTube channel, and the ArtiFact Podcast. Recent episodes include a survey of photography from Josef Sudek to Laura Makabresku, an examination of Abstract Expressionism as depicted in Kurt Vonnegut’s Bluebeard, and a debunking of Internet sciolists such as Jordan B. Peterson and Christopher Langan.

More from Jessica Schneider: Charlie Parker & The Drive For Greatness In Damien Chazelle’s “Whiplash” (2014), So Much Is Delicate: C. Scott Willis’s “The Woodmans” (2010), The Romantic Longing within Jean Renoir’s “The River” (1951)