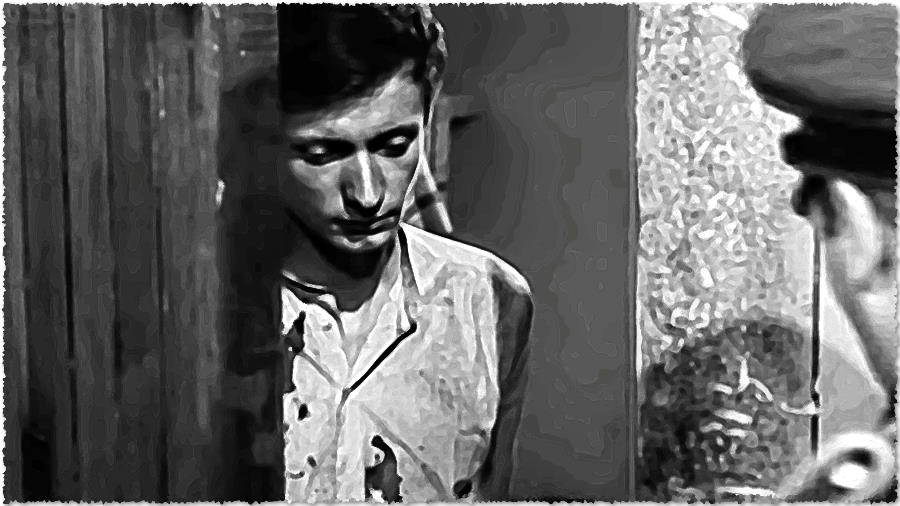 François Leterrier plays Fontaine, a French resistance fighter who has been jailed within a Nazi prison camp. His expressions carry minimal emotion but his hands remain busy. In the opening scene, we see him attempt to escape from a car, but not before feeling the right push and press of the door handle. His motion is meticulous, deliberate and subtle and there is no music to accompany it. Events play out as they might in real life, where after enough tragedy, one will begin to suffer more from apathy than fear.

Fontaine learns that he will be sentenced to death. The film, based on a real man’s life, is a tale of deliberation and caution. He sits within his small cell and communicates via tapping upon the wall. He waits for his food—a small dish of slop served with a spoon. He keeps the spoon and uses it to slowly chip away at his door. These small actions not only keep him occupied, but they are necessary for his survival. His privacy has been stolen—he has no control. Gone is his autonomy. Each day the prisoners are collectively forced to dump their excrement into a sewer. They move about unadorned—deflated, depressed, as though forced into ritual. Life as one knows has become a living hell.

Eventually, Fontaine is given a cellmate—a 16-year-old who he must either trust or kill. The two embark on their escape plan, notably via their use of rope and a hook. Emerging from their cell one night, they then climb to the roof and wait. One AM arrives and still they wait. Four AM arrives. Fontaine tosses the rope and climbs across. The boy does the same. They must remain quiet lest they will give themselves away. Note how much suspense is contained in silence.

When one’s freedom has been taken, he is then left without any sense of self-control. The passage of time upon a wall, the movement of shadows—this becomes everything when one is physically confined. Stuck and small, what is a man supposed to do? Rather, Bresson focuses on the intimate—the immediate and physical. There are no ‘beauty shots’, as Ebert calls them. Scenes contain an eye-level realism where we get to be the eye. We are every bit within this same small cell. Think of other prison escape films and how much attention is given to sensation. The guards usually have names and we know which one is trustworthy and which one is not. In A Man Escaped, we are aware of the guards but who they are is no matter. Appearing and disappearing like ghosts, that they exist is enough. ‘They choose to wear this uniform,’ Fontaine says. ‘I don’t choose a thing.’ When asked if he believes in luck he says, ‘I used to, but it didn’t work out.’

In The Trial of Joan of Arc (1962), Robert Bresson presents Joan in a similar manner. Once again, he refused to hire actors, as he preferred their faces be forgettable. Finishing at just 65 minutes, Bresson manages to successfully capture her trial without the sensation of a score, other than his use of drums near the end. Music is mostly absent within A Man Escaped, save for the use of Mozart. Note, however, that the music is never utilized when observing Fontaine up close. It is only in the credits and when he is walking away from the screen that we hear it. That Bresson chose to do this is important—he is showing us that sensation resides in the abstract, but never up close.

In one scene, a group of women are passing outside Fontaine’s cell. He watches them from his afternoon barred window, wherein they move about perfunctorily, even when hearing the gunshots from an ongoing execution. It is as though they have accepted their fate and that this is just another day. One need not wonder how soldiers grew so accustomed to killing. See it enough, punish enough, and even the most frightening experience can grow mundane. Within such a tiny cell, several feet begin to feel like miles—repetitive, confined.

In life, one’s lack of control often begins with a lack of choice. Take away one’s ability to decide for himself, and soon the deflation, the depression will set in. Some will be unable to stand it and they will take matters upon themselves. Fontaine does. Although his face remains neutral, we can only imagine his turmoil. This is a world where one will be put to death for simply possessing a pencil. ‘Robert Bresson’s films are often about people confronting certain despair. His subject is how they try to prevail in the face of unbearable circumstances. His plots are not about whether they succeed, but how they endure,’ Roger Ebert notes. He is correct. A Man Escaped is not about one man’s gain or loss, but how he has managed up until the very end. Every moment is a survival game. Throughout the film, we know the noises as much as he, we are aware of the passage of footsteps, the marks on his cell wall.

It should also be noted Robert Bresson’s use of hands. It is as though the hands carry more expression than the actor’s faces themselves. Pickpocket (1959) is most obvious an example. Much like in A Man Escaped, the character’s motions are small, deliberate but yield drastic results. We learn his methodology, his intention. A thief must employ just the right motion, lest his victim will feel the wallet gone. These are not things that most of us think about. Without freedom to move, we suffer a sort of crisis. The hours go on indifferently and one’s concept of silence changes. One must adapt lest he will not survive. Within him, the hours and sounds go on mercilessly, as imprisonment strips one of identity. The title gives a clue. Fontaine is not the man but a man who escapes.

If you enjoyed this review of Robert Bresson’s A Man Escaped, consider supporting us and get patron-only content on our Patreon page. This will help the growth of this site, the automachination YouTube channel, and the ArtiFact Podcast. Recent episodes include a survey of photography from Josef Sudek to Laura Makabresku, an examination of Abstract Expressionism as depicted in Kurt Vonnegut’s Bluebeard, and a discussion of Hermann Hesse’s classic novel, Steppenwolf.