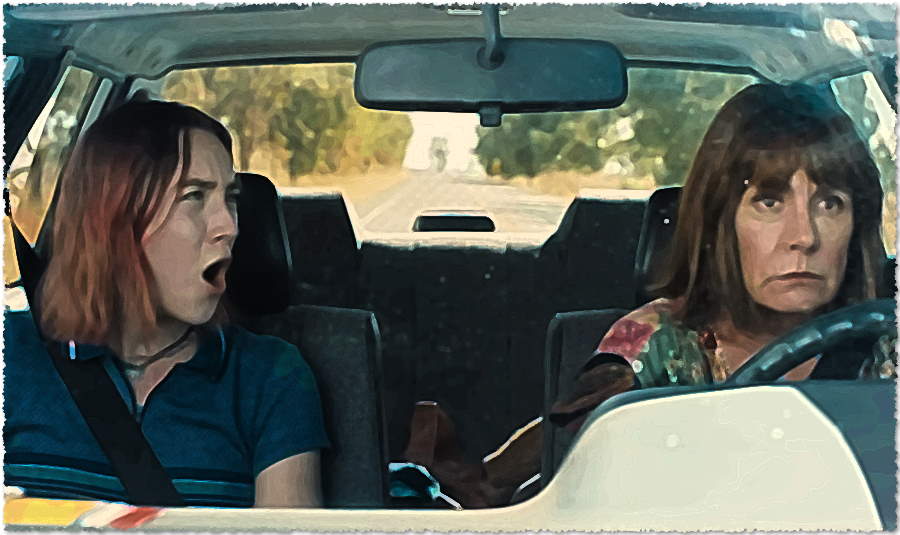 When you are 18, your identity resides in the past. Where you are from, where you went to school, and who your parents are. You simply haven’t lived long enough to accumulate a string of accomplishments, nor have you had the opportunity to make enough life choices to define you. So, when you are uprooted at 18 and transplanted to a university—‘Where are you from? Where did you go to school?’—these are the questions asked. They serve as a shallow introduction—a way of establishing your place—of defining you—within these new surrounds.

Lady Bird is directed by Greta Gerwig, and I was familiar with her performance in Noah Baumbach’s Frances Ha (2012), which is one of the most cinematically unattractive films I have ever seen. Shot in dingy black and white for no other reason than to evoke French New Wave, the film is typical Baumbach insomuch that you can almost hear him whispering, ‘This is a Noah Baumbach film. Expect it to be intellectual with lots of literary namedropping.’ His films are sciolistic in some way or other, but admittedly there was something about Frances Ha that made me enjoy it, despite its weaknesses. Perhaps that something is Greta Gerwig’s performance as the ambitious yet vulnerable Frances.

Lady Bird stars Saoirse Ronan as Christine, a high school senior who prefers to be called Lady Bird, rather than her birth name. The reason is never explained but we can gather that she doesn’t like her ordinary life and so this is her attempt to differentiate herself. ‘Do I look like someone from Sacramento?’ she asks. ‘I hate California.’ Her mother Marion (Laurie Metcalf) works double shifts as a nurse and she takes her daughter’s words as a slight. ‘You have a great life,’ she informs. But Lady Bird, in midst of her longing, doesn’t see it. ‘I wish I could live through something. I want to go to the East Coast,’ she says. ‘I want to live where there are writers.’ ‘You can’t even pass your driver’s test,’ Marion reminds. (Gerwig, who is from California and attended university in New York, based Lady Bird on her own experience.)

The film captures adolescent perspective well. Lady Bird, who attends Catholic school, lands a role in a play but insists she doesn’t like it because everyone who auditioned got a part. What is the specialness in that? She meets her first romance—a boy named Danny (Lucas Hedges) whom she learns is gay, and has sex for the first time with a pretentious narcissist named Kyle (Timothée Chalamet) who uses words like ‘baller’ to define her. She laughs and eats unconsecrated Communion wafers with her best friend Julie (Beanie Feldstein), and she associates briefly with the rich, popular girl (Odeya Rush) who has no ambitions other than to live out her life in Sacramento and have kids. Nothing extraordinary happens to Lady Bird, but the film isn’t really about any of these things insomuch as it is about Lady Bird’s relationship with her mother.

Laurie Metcalf is most outstanding in this film—she is caring, warm, yet stubborn and headstrong. It is clear that she loves her daughter but has a hard time showing it. Rather than using supportive words, she feels that working double shifts as a nurse to support the household is enough. Likewise, Lady Bird is a bit of an ungrateful asshole. She feels shame for her parents’ lack of money and has moments of elitism where she looks down on them. Yet, she still longs for her mother’s approval. When the two go shopping for a prom dress, Lady Bird is deflated when her mother does not love the same dress as she. ‘You think it might be too pink?’ Marion asks. Then, in an honest moment, Lady Bird admits that she seeks her mother’s approval—that her mother’s opinion is important. ‘Do you like me?’ Lady Bird asks. ‘Of course I love you,’ Marion replies. ‘Yes, but do you like me?’

Greta Gerwig sets her film in 2002, aligning it with the technology and history of that time. Adolescents use terms like ‘cell phone’ (in 2022, the word ‘cell’ has long been dropped from the vernacular) and the Iraq War casts a pall over the television screens. Gerwig’s directorial skill is shown via her use of small conversational moments. Often, we are given glimpses of exchanges without knowing the full back story, thus adding realism. (‘I admire your mom. She let me move in when my parents kicked me out,’ says her brother’s girlfriend, Shelly.) After all, it is not important for an audience to know everything. Yet, the film’s lack is reflected in the rather conventional use of cinematography and standard shots. Lady Bird is assuredly more driven by character than image. While not a great film, Lady Bird offers a good depiction of a mother and daughter relationship—the tension, the struggle and ultimate affection.

Meanwhile, Lady Bird applies to college on the East Coast. With fantasies of attending Ivy League, she is not the best of students, and so she is put on a waiting list for a New York school. The film ends poetically with Lady Bird privately reading some of her mother’s hand written letters, which her father (Tracy Letts) secretly stashed into her bag before her departure. ‘Don’t tell her you saw them,’ he says. ‘She was worried you would judge her writing.’ We don’t know exactly what the letters say, other than that they are hand written in pencil. It appears that Marion put much effort into writing them—‘Dear Christine,’ one letter says. ‘Dear Lady Bird,’ says another. It is evident that Marion cares what her daughter thinks—that both mother and daughter want to be seen and understood and valued by the other. Just neither knows how to express it. That Greta Gerwig chose for the audience to not know the full details of the letters shows a subversion of cliché on her part.

In just the short time in New York, Lady Bird drops her alias and introduces herself as Christine. She finds herself marveling over past childhood scenes, where she is driving for the first time in Sacramento. She stops into a church on a Sunday and momentarily witnesses a mass. A religious person could claim she was missing her faith, but this is more about her self-acceptance. It goes beyond homesickness, as that would be too easy. Rather, Christine realizes who she is, her past, her parents, her life—that all of it is hers and not necessarily bad. What is life but the people and places that have shaped us?

Several reviewers have mentioned that they were disappointed in the ending, as we are not provided any perfect bow-tie resolution. Instead, it is a one-way conversation—Christine leaving a message for her mother: ‘Mom, did you feel emotional the first time that you drove in Sacramento? I did. All those bends I’ve known my whole life, and stores, and the whole thing. But I wanted to tell you I love you. Thank you.’ Who knows if she would have left these words had she not seen her mother’s letters. Both conversations—Christine’s message and her mother’s letters—take place one-way. Yet we know that this mother and daughter pair will someday speak and doubtlessly they will fight. Some things are ever certain. Cherish what we remember. Who is to say that is not the perfect resolution?

If you enjoyed this review of Greta Gerwig’s Lady Bird, consider supporting us and get patron-only content on our Patreon page. This will help the growth of this site, the automachination YouTube channel, and the ArtiFact Podcast. Recent episodes include a survey of photography from Josef Sudek to Laura Makabresku, an examination of Abstract Expressionism as depicted in Kurt Vonnegut’s Bluebeard, and a debunking of Internet sciolists such as Jordan B. Peterson and Christopher Langan.

More from Jessica Schneider: The Human Intrusion: Michelangelo Antonioni’s “Red Desert” (1964), Charlie Parker & The Drive For Greatness In Damien Chazelle’s “Whiplash” (2014), So Much Is Delicate: C. Scott Willis’s “The Woodmans” (2010)