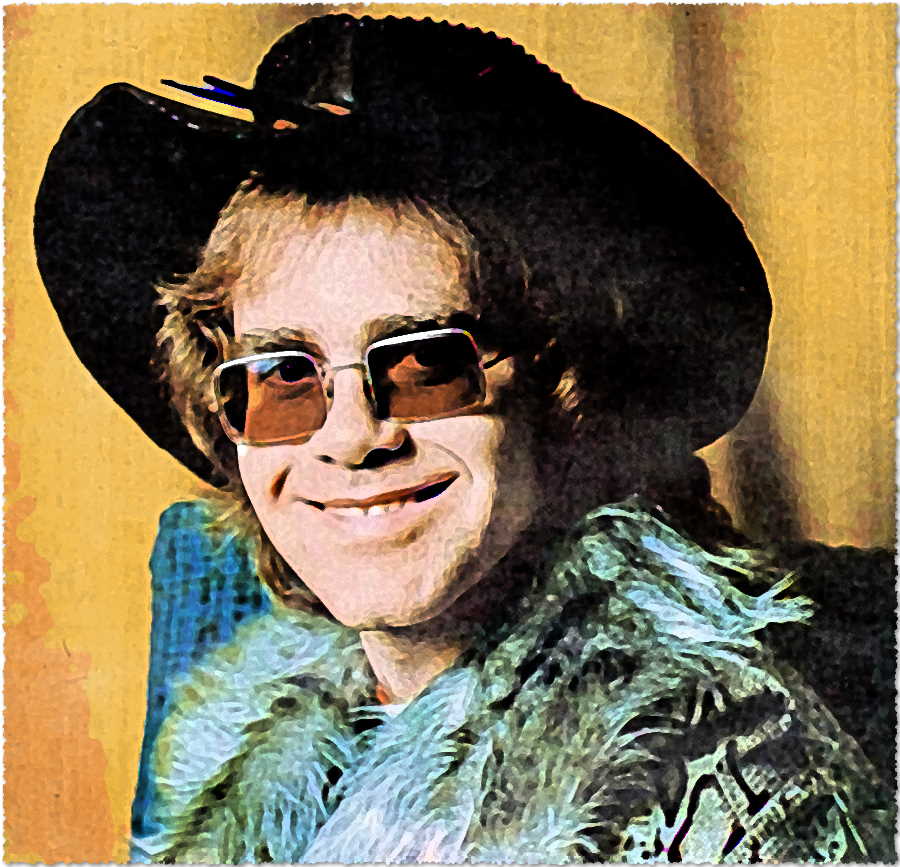 My experience with Elton John includes a 1970 concert at Northrup Hall in Minneapolis MN. The show was mostly a solo act with Elton at the piano although Bernie Taupin did make an appearance. One detail I did notice is that John had a 16 ounce glass with a clear liquid in it that he sipped as though it might have been vodka or gin. By the end of the show the glass was empty, and John was feeling no pain.

It was how I knew the artist back then, his exuberance. He was truly the Rocket Man. Known for his outlandish costumes and partying behavior he clearly tried to court the image of height. His lyrics from his song “Rocket Man”:

She packed my bags last night, pre-flight
Zero hour: 9:00 AM
And I’m gonna be high as a kite by then
I miss the Earth so much, I miss my wife
It’s lonely out in space
On such a timeless flight
And I think it’s gonna be a long, long time
‘Til touchdown brings me down again.

…described his life, his public life anyway, fully if not understated. This was from a time when many artists expressed joy; before you heard complaints of the work involved to create the art. You wonder if it can ever be that way again. What happened? The world at the time had its tragedies, but if you judged by Elton John’s art you would have never known it.

Was Elton John’s music purely escapism? Who’s to say positive energy is not reality? It could and should be normal. If some doctors had their way, he would have been put on meds. Indeed he had to leave the booze behind. You can say it was old age, but there are still some seniors out there spreading their wings.

No, people changed. Elton John must have felt the weight of public opinion. With the election of politicians like Ronald Reagan conservatism began taking over, shredding the freedoms that had been created in the 60s. No one was immune including the artists. I’m talking in gross generalities but sometimes trends tell the truth. People began to lose their appetite for freedom or maybe it was the wild freedoms that were tempered by reality.

It was reflected in the music of Elton John, “Little Jeannie” or “Sad Songs (Say So Much)” which reflect a more introspective artist. To be sure, “Still Standing” shows he didn’t go down easy, but the fact he even made the claim indicates that there was a turn of events. People began to worry about being safe. Safety has always been an issue in human existence and always will be, but John didn’t seem to know it in his younger career. He wasn’t alone. The music industry was taking risks and backing artists who were truthfully a little wild. I’m not necessarily pushing for a return to the 60s, just wondering why it is now cool to be a snowflake.

But the younger generation is facing a different world today. Some prospects don’t seem as bright. Yet, I wonder if some of it isn’t self-created. We’ve let the billionaires take the spotlight on what it means to be a success. Mr. Bojangles is dead. So is the middle class. Republicans these days are creating a two class system. How long and how many of them do they think can be on top? Stars like Elton John were on top back in the day, but they were about creating excitement and a zest for life that made you happy. They were not the Supreme Court judges we have today taking freedoms away. People today are watching their freedoms be robbed while they seem to expect them to be simply handed over. The struggle now is for self rather than as artists like John who threw caution to the wind. Yes, the rich are getting their way, and instead of being taxed, they are being followed.

Elton John gave back with efforts like his AIDS foundation. I’m not saying there’s no philanthropy anymore but it doesn’t have the spotlight that Elton Musk garners. Why are people so hungry for the rich? Do they really believe trickle down works? You can say people have become star shooters because they realize stars aren’t perfect. What happened to the benefit of a doubt? Women are trying to assert themselves, most getting nowhere. Where’s our Elton John seizing the spotlight?

All of these sentiments demand to know: what about the art? Was Elton John’s work good art? I’m more focused on what is the effect art has on its audience. Leave judgments to the courthouses and feel the feel. Why are feelings important? Because they control our thoughts. Good thoughts create a better world. And who doesn’t want a better world except maybe for Republicans these days.

Is a good world possible? Yes, but it takes intention to make it that way. Maybe Elton John wasn’t aware of all the mechanics of the way he created a better world, he just did it. If he had doubted himself as much as people seem to doubt themselves, he wouldn’t have gotten out of the starting blocks. If people had tried to control him as much as people are into control now, we would never have heard of him. People followed him because he offered life, not money. Can we all be Elton Johns? In our own way we can. We may reach the level of fame he has, but as David Bowie said, fame is hollow. To get it you pay a price that most people would choose not to pay. But we can benefit by supporting their trips of ego. Why? Because it’s there. Elton John may not have been truly feeling the excitement he projected, but he made us think he was and offered us a chance to really feel the excitement. He was a true star and justifiably above the fray. But he wasn’t afraid to share:

Oh, Daniel, my brother, you are older than me
Do you still feel the pain of the scars that won’t heal?
Your eyes have died, but you see more than I
Daniel, you’re a star in the face of the sky

If you enjoyed this analysis of the meaning behind Elton John, consider supporting us and get patron-only content on our Patreon page. This will help the growth of this site, the automachination YouTube channel, and the ArtiFact Podcast. Recent episodes include a survey of photography from Josef Sudek to Laura Makabresku, an examination of Abstract Expressionism as depicted in Kurt Vonnegut’s Bluebeard, and a discussion of Hermann Hesse’s classic novel, Steppenwolf.