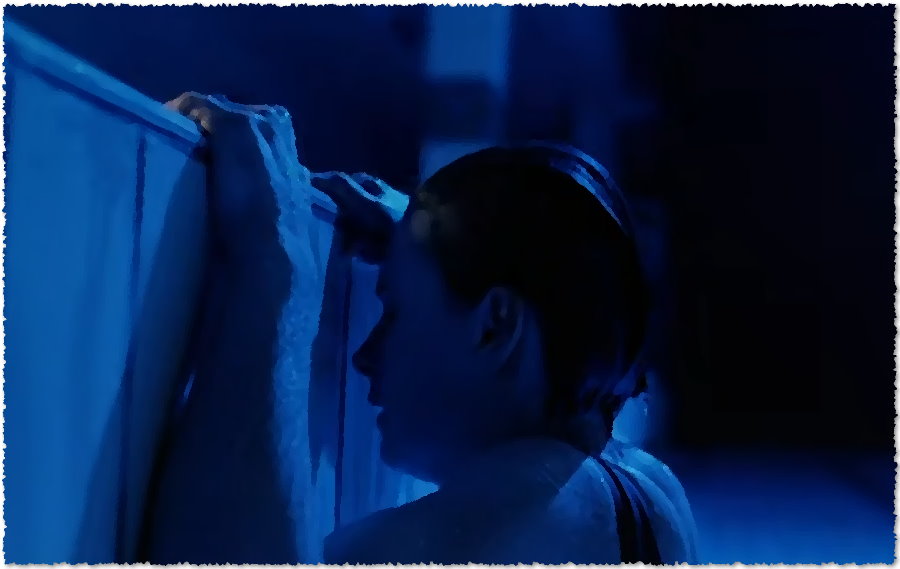 There are many ways grief is undertaken. Some are long sufferers but hold it in, and others react outwardly and immediately. They say that it has five stages, but how someone progresses from one stage to the next depends on that individual, as there is no right or wrong way to go about it. Krzysztof Kieslowski’s Blue might be one of the best films ever to touch upon grief and what it does to a person. How does one approach such tremendous loss, like the death of one’s husband and daughter? How does one even begin to live again?

Juliette Binoche plays Julie, a wife and mother who loses her family in a car accident. The event takes place within the film’s first few moments. Her husband, a successful composer, crashes their car into a tree. Only Julie survives. An onlooker comes to her rescue, and next we see images of the hospital doctor reflected within her eye, informing her that both her husband and daughter are dead. Turns out her husband was in midst of telling a joke when the car crashed.

Julie does not cry. Or if she does, we don’t witness it. Yet she is visibly upset and tries to attempt suicide by swallowing a bottle of pills, but she is unable to go through with it. She is curt with others—‘You used to be nicer,’ a reporter, who is asking about her deceased husband, tells her. ‘My husband and daughter are dead,’ Julie says. It is rumored that she composed much of his work. But how much, we don’t know. She watches her husband and daughter’s funeral on a portable TV screen while still in hospital. There is something sad and distant about this—that she—this wife and mother— has now become a stranger, separate from her husband’s life. It is through the TV where she later learns her husband had a mistress, who is expecting his child.

Krzysztof Kieslowski uses color most effectively—we see Julie swimming in a blue pool at night, where she curls up into the fetal position, underwater. Her housekeeper she finds crying before moving out of their house. ‘Why are you crying?’ Julie asks. ‘Because you are not,’ she replies. Then, upon moving into a Paris apartment, Julie is asked to sign a petition to ban a woman from the complex. The woman—whom they call a whore—is a sex worker and no one wants her there. Julie refuses to sign. ‘It’s not my business,’ she says. As result, Lucille (played by Charlotte Very) feels thankful for Julie’s kindness. ‘They wanted to kick me out, but they needed everyone to sign,’ she says. Julie doesn’t feel she did anything exceptional.

Both women are broken, albeit differently. Lucille is lonely and confesses that she feels shame upon seeing her father at the sex club one night. We don’t get much beyond her pain, but the musical score serves as the mood. Likewise, Julie engages in sex with one of her husband’s friends, but she feels nothing. Yet she still senses the fragility of life, as she then sees a litter of baby mice within her closet. She cannot force herself to kill them. Instead, she borrows the neighbor’s cat, only to then feel guilty about it afterwards.

There is not a lot of shallow plot that occurs within Blue, but then again, why should there be? What happens when one is grieving? One’s observations change, and how one sees the world shifts. When one has been marred by tragedy and is still forced to engage with the world—what then? The idea seems preposterous, as how does one even begin to breathe? When Julie learns of her husband’s mistress, she follows her and they meet in a restroom. Neither is outwardly bitter. There is no face slapping. The mistress worries that Julie will hate her. Later that evening, Julie returns to the blue pool and holds herself underwater. How different might she be had he survived?

Blue is the first film within Krzysztof Kieslowski’s Three Colors Trilogy. The script, written in Polish, was then translated into French, with Binoche’s help. It delicately composes a buildup of small moments—tiny visuals that might otherwise go overlooked. At one moment, Binoche is forced to scrape her hand against a stone wall, which results in bleeding. She claims there was no protection for her skin and that her wounds are real. Julie must do this because her internal pain is too much to bear. She then pulls her hand from the stone wall and curves it into a fist. Much like her fetal position within the pool, what more must she endure? The music serves as her emotional state—it evokes her mood. We hear it, but we don’t see her grief manifest in the form of tears.

At one moment, Julie visits her mother in a nursing home, who is suffering from Alzheimer’s. She doesn’t remember her daughter and she mistakes Julie for her own sister. Julie’s mother has it easy—she has forgotten her life, by no choice of her own. She watches the world on a television screen. ‘You can see the world,’ she says. With the absence of memory, so goes the absence of pain. This is an important element within the film, as Julie is someone who is unable to forget, and hence, she dwells within her pain each day. Her mother, even after Julie relays who she is, forgets her. How lonely it must be to not be remembered even by one’s mother. In much the same way, Julie has been forgotten vis-à-vis her artistic contribution towards her husband, who has earned the credit as the great composer. But who is she?

When the young man from the accident comes to return a small cross necklace he found at the scene, Julie informs him that he can keep it. Likewise, her husband’s mistress wears the same cross. The mistress claims that he loved her. Why was Julie not enough? We are only given glimpses into their lives, as much that occurs within the film is done metaphorically—her grief is internal, but it is grief nonetheless.

Krzysztof Kieslowski is a master when it comes to capturing the artful eye—the way shadows pass across a street or upon a dinner plate. Outside is a man who plays the flute and sleeps on the street. Like Julie, he is the one lone persistent thing. What to say when we witness shadows pass—we see the shade move, wherein the scene has changed but on the inside we remain the same. At the film’s end, we see Julie release a tear, as the music plays. Only then a sly grin emerges and the camera points to the blue sky. Blue is the color of sadness, but also the color of sky. Blue sky—something we often associate with comfort and peace. Blue is the story of one woman’s grief. Blue. There can be no other color.

If you enjoyed this piece on Krzysztof Kieslowski’s “Blue”, check out the automachination YouTube channel and the ArtiFact Podcast. Recent episodes include a dissection of Kurt Vonnegut’s classic novel, Galapagos, a philosophical look at kitsch, aesthetics, and NFTs with UK painter Ethan Pinch, and a long discussion of photography from Alfred Stieglitz to Fan Ho and Vivian Maier.