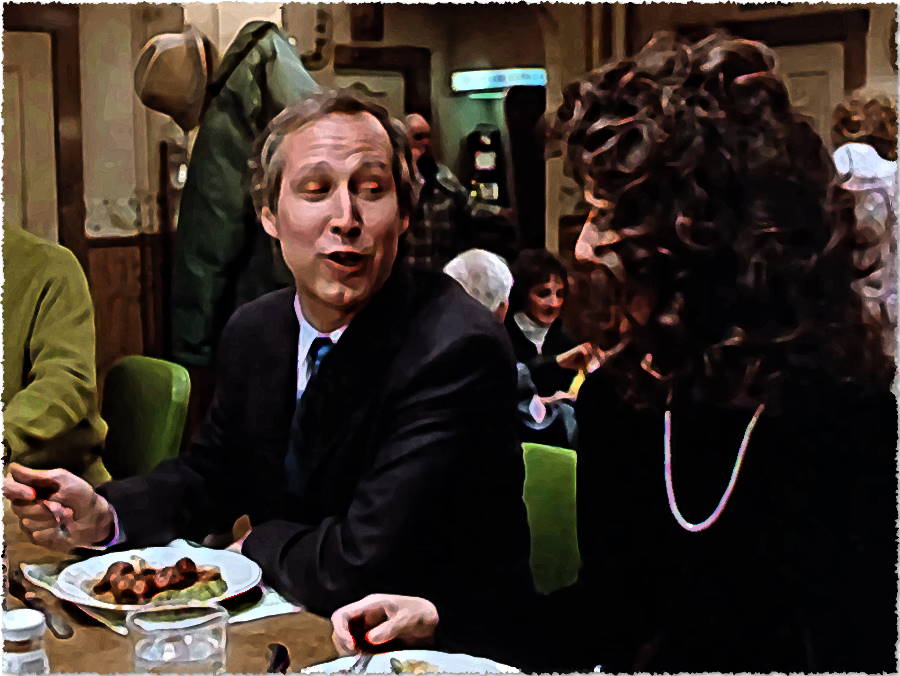 ‘Being a fake is what I do best,’ Andy Farmer tells his wife Elizabeth when the couple has bribed their local townspeople in recreating a Norman Rockwell universe within their small Vermont town. George Roy Hill, who is known for Butch Cassidy and The Sundance Kid, The Sting, and Slaughterhouse Five, has tackled this delightful comedy that pokes fun of pretension and image with just the right farce. In Funny Farm, Andy (Chevy Chase) has traded his New York sports writing job for a quiet, small-town life where he plans to write his Great American Novel. Likewise, the publishers have already issued him a 10K advance in the hopes that his talent will deliver. Andy’s wife, Elizabeth (Madolyn Smith Osborne), is a schoolteacher who reluctantly welcomes the change as the two plan to uproot and start a family.

If this concept already sounds cheesy, it has succeeded. While the script is of course going to have everything go wrong (including snakes and bugs), George Roy Hill utilizes the appropriate light-hearted humor with a splash of the sardonic. In his review, Roger Ebert cleverly refers to the townsfolk as those one might expect to see out of a Stephen King novel. They’re not so much dumb (even though some are) or evil as they are dispassionate and unfriendly. Odd would be too nice a word. When the Farmers’ movers are lost and ask for directions to Redbud, they address an old man by the name of Mac. ‘How did you know my name was Mac?’ the man asks. ‘I just guessed,’ the mover replies, to which the man remarks, ‘So why don’t you guess your way to Redbud?’

Within their short arrival, the Farmers notice that things are a bit off. The local sheriff rides around in a taxi because he can’t pass his driver’s test, an old woman who owns an antique shop only sells her personal heirlooms— (my father died in that chair), the mailman is a psychopath who throws—rather than delivers—their mail, and the previous owner’s corpse is buried in their backyard. Meantime, Andy is insistent on beginning his Great American Novel about four poker buddies robbing a casino. While the idea certainly sounds trite, he sits at his desk and watches the birds, until one gets too loud, and so he tosses his hot coffee at it off camera. Yet because Funny Farm is humorous and absurd enough, these asides work. Andy appears to have writer’s block upon beginning the first page, wherein he is only able to type one word: The.

Of course, that any first-time novelist could up and move to the country to ‘live the life of a writer’ is unrealistic, even by 1988 standards. When Andy finally asks Elizabeth to read his first draft on their wedding anniversary, she cries and advises that he burn it. ‘What about the story?’ he asks. ‘The story?’ she inquires amidst tears. In other words, the book is bad. Meanwhile, she has been crafting a children’s book in her own time—a story about a squirrel named Andy who is from the city and falls asleep in the back of a delivery van. When the squirrel wakes, he finds himself in the country where everything goes wrong. ‘This squirrel is me, isn’t it?’ Andy accuses, as he is clearly very competitive. As example, when the Farmers visit a restaurant on their anniversary, Andy is determined to set the new record for eating the most cooked sheep testicles in town (unknowingly of course).

Chevy Chase held a significant presence within comedy throughout the 1980s. Known for his portrayal of Clark W. Griswold from National Lampoon’s Vacation films, he started out as many did on Saturday Night Live. Funny Farm is one of those comedies that isn’t as culturally prevalent as a film like Groundhog Day, but George Roy Hill ensures it is cleverly rendered enough to be worth the revisit.

Tension mounts when Andy grows envious of Elizabeth’s publication (she claims she sent the book longhand to a publisher and in response got a book deal, a 5K advance, and a typed version of her manuscript). Tell me, in what universe does that occur? Thus, when Andy devolves into a life of alcoholism and despair due to his failed book (again, while an obvious writerly cliché, the humor subverts it) Elizabeth decides to leave him upon learning that he sent her book to his own publisher. Long story short, they plan to divorce and so they need to sell the house. This is where it gets good. Suddenly, a desperate Andy must inquire of his fellow residents a favor. Unwilling they are until learning there is money is involved, he requests that they portray life like the Norman Rockwell images within Life Magazine. ‘Look like them, dress like them, speak like them,’ he says. Therefore, when the new buyers arrive, they are overwhelmed by the supposed loveliness of a town that now saccharinely much resembles a Thomas Kinkade painting. ‘Cue the deer,’ Andy instructs, over the walkie-talkie, as a deer is let out of its cage, only to dart pass the prospective buyers.

I have always admired how this film pokes fun of phony people. What prompted my rewatch was seeing a channel on YouTube wherein a person was attempting to recreate ‘Victorian cottage life within a small town.’ While this sounds idyllic, the videos came off staged and affected. The words, ‘welcome to my life, where everything is a prop,’ filled me. Immediately, upon seeing videos of this person foraging through the woods barefoot in a recrafted, white, Victorian gown, made me think of not Emily Dickinson, but rather, Chevy Chase’s words: ‘cue the deer.’ Thus, while these videos could objectively be considered ‘pretty’, the life portrayed appeared precious and inauthentic, sort of like the recrafted citizens of Redbud.

George Roy Hill, within his filmic version of Kurt Vonnegut’s Slaughterhouse Five, successfully captures the essence of Vonnegut’s style via his use of cuts and knowing just when to end a scene. As example, I still recall when Billy Pilgrim falls face-first within his bowl of soup, and when he is forced to wear a jacket that is several sizes too small. Hill knows how to use humor to his advantage, even when the subject might run counter to it.

By the film’s end, Andy remarks that as a novelist, he makes for a really good sportswriter. And I suppose that is the message then. Go where you’re good, don’t try to be what you’re not, and sometimes it helps to pay off the neighbors so they like you. Funny Farm isn’t a great film, but rather, it is one that succeeds at what it is: good farce. When the psychopath mailman shows up at the Farmers’ front door to deliver the mail for the first time in front of prospective buyers, he relays how he will be going ice fishing later. ‘Ice fishing?’ Andy asks, privately. ‘I thought it was a nice touch,’ the mailman replies. ‘But it’ll cost ya.’

If you enjoyed this review of George Roy Hill’s “Funny Farm”, consider supporting us and get patron-only content on our Patreon page. This will help the growth of this site, the automachination YouTube channel, and the ArtiFact Podcast. Recent episodes include a comparison between Thomas Pynchon’s Gravity’s Rainbow and Kurt Vonnegut’s Slaughterhouse-Five, a survey of photography from Josef Sudek to Laura Makabresku, and a discussion of Hermann Hesse’s classic novel, Steppenwolf.