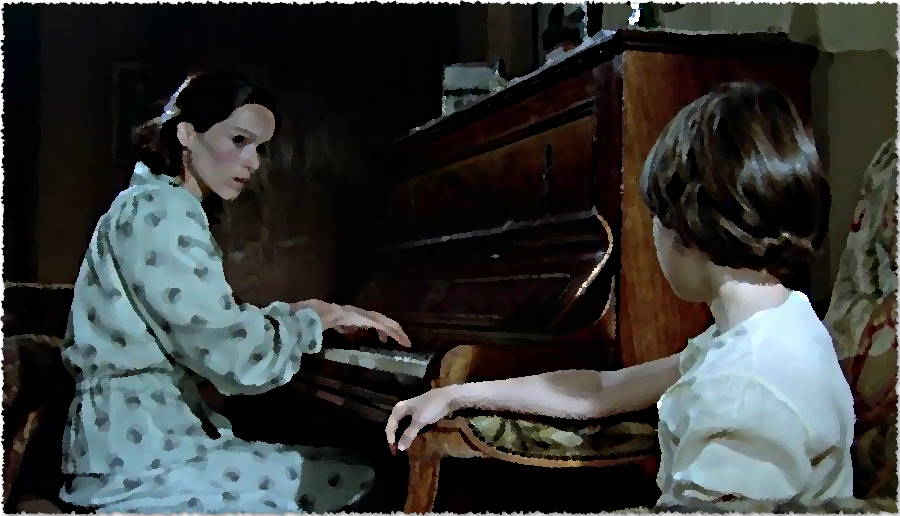 A solemn piano piece plays over sentimental family photos; young Ana, whose wide-eyed face is lingered over in the images (and will come to dominate the screen), moves about in the shadows of a great house. All is sealed off, every space shuttered and the house’s stately surfaces only barely defined by what visible light there is, so that Ana, in a nightgown, appears luminous and strange. She seems to be homing in on a room where a man and woman make furtive and intimate congress; suddenly, the man is seized by some attack, and as the woman rushes out of the room in a disheveled state, the look she gives Ana (and her hurried exit from the darkened manse) tells the viewer just enough about their relationship, or lack thereof. Ana, throughout all of this, is impassive, and when she sees the man lying, slackened by death, in the sheets, she seemingly does not understand why the man cannot respond to her quiet inquiry. This is her father, some distinguished military figure if the pictures offer any clue, and his face now is as opaque as the gloomy interiors of his home.

There is a mostly finished glass of milk on a nearby desk. Its significance, for now, is unknown to us save for Ana’s curious attention towards it in the midst of her father’s death. She takes it and cleans it and in the kitchen (brilliantly lit, the very picture of purity, now) her mother finds her and teasingly chides her – but not all is as it seems.

The moods of these opening sequences contain all that is thematically relevant about Carlos Saura’s Cría Cuervos. It’s about memory (a child’s simultaneously indelible yet unreliable memory, to be specific), and the trauma of early loss – accentuated, in Ana’s case, by the carelessness/inept behavior of adults, for there are doors that should not only remain shut but locked, as well. The title of the film is taken from an old Spanish proverb that can be loosely translated as, “Raise ravens, and they’ll gouge your eyes out.” It’s a grim statement, but Ana’s world is grim, despite its at times quaint and cutesy appearances, and her elfin features are well-equipped to hide a dangerously perceptive mind. The young actress Ana Torrent’s eyes are just as precociously aware as they were in Victor Erice’s earlier The Spirit of the Beehive, except here there is less wonder in the child’s curiosity and more of a morbid insistence in discovering the vagaries of the adult world.

Is it evil that’s growing in her? Perhaps, but keep in mind, most children cannot yet fully conceptualize the gravity of even their most intensely vicious wants, and when Ana is inappropriately witness to her mother’s deepest, death-bed despair, how can she reconcile this loss with the ceaseless infidelities of her father and the obvious pain it caused in his wife? All she knows is the almost angelic kindness of her mother (she is a gifted pianist, and gave up her talents in order to care for her three daughters) and the venal lusts of the decorated officer. Unruly behavior – as the girls’ strict aunt never fails to stress – must be corrected, and is there a better way to correct malfeasance than complete extermination? This is simply how a child thinks. However, the totally expressionless way Ana goes about meting out her vengeance through Cría Cuervos is all the more sinister for its seeming innocence.

Yet, her mind is deeply troubled, as dreams (hallucinations?) keep her from uninterrupted sleep, and her mother’s walking memory serves as a constant reminder of betrayal, as the past continually interweaves with the present. Like Old Hamlet, the parental shade compels the child to action, and she cannot rest until all the rot is purified from the castle. Interestingly, Carlos Saura uses the same actress who portrays Ana’s mother (Geraldine Chaplin, very much her famous father’s daughter, looks-wise) as the future Ana, who ruminates over these events with the sobering distance of twenty years’ hindsight. This technique of a future re-telling, while an extraneous flourish, in my view, nonetheless emphasizes the degree to which Ana identifies with her mother, whose purity has been ravaged and who must be avenged.

Other characters are present in Ana’s life (her two sisters, the irresponsible maid Rosa, the uptight yet kind and much maligned Aunt Paulina) but they do not dominate her thoughts as much as her mother’s disturbing last days. One feels the heavy emotional burden Ana must bear, as she cannot even relate the truth of her father’s final infidelity with Amelia (a family friend) without being chided as a mere gossip. Some of Torrent’s best acting occurs when she simply sits listening to recordings of her mother’s playing, or of a pop song whose upbeat production clashes with its melancholy lyrics. Easy enough for Ana to empathize with, for even surrounded by the cushiness of privilege she is unable to genuinely connect with even well-meaning relations: one of the saddest scenes is when Aunt Paulina attempts to comfort Ana in her night terrors, but Ana can only see an insufficient surrogate, and lashes out with truly insidious words.

This raven’s talons touch even the most helpless victims: Ana’s grandmother, mute and likely dementia-ridden, spends her days smiling absently at the girls. Confined to a wheelchair, she must be wheeled around to her desired spots, staring out at the gardens or at a wall of family pictures. Her perpetual kindliness is more a haze of behavior than anything meaningfully enacted. Perhaps Ana senses this utter void, and judges that life persisting by only the most tenuous of threads is just useless, and vastly inferior to the warmth exhibited by one such as her dear mother – for in a chilling scene, Ana toys with the old woman’s reminisces and, stroking her like she does the corpse of a beloved hamster, asks if she’d like to die. For the first time, the grandmother’s face contorts into real emotion, and one wonders just how clueless Ana actually is.

Many of Carlos Saura’s films were allegorically related to his critiques of Francoist Spain, but I don’t see how such a political lens is necessary, or even all that relevant, to one’s viewing. While the film is undoubtedly subsumed in that time/era, it stands alone as a child’s premature reckoning with adult sins and adult pains. Memory, and the inability to properly cope with grief, invades Ana’s life. Is this troubled child not as immobile, cycle-trapped, as her senile grandmother? The past entrances them, as do the activities of the outside world, and both are equally near to death despite the difference of years. One, at least, is afforded the mercies of old age, forgetfulness – the other must persist, caught in remembrance, mystified by her own childhood and gouging at what she cannot know.

If you enjoyed this review of Carlos Saura’s “Cría Cuervos”, consider supporting us and get patron-only content on our Patreon page. This will help the growth of this site, the automachination YouTube channel, and the ArtiFact Podcast. Recent episodes include a discussion of Ryusuke Hamaguchi’s “Asako I & II” and “Drive My Car”, a dissection of Elon Musk’s stupidest claims, and a critique of James Cameron’s Terminator films.