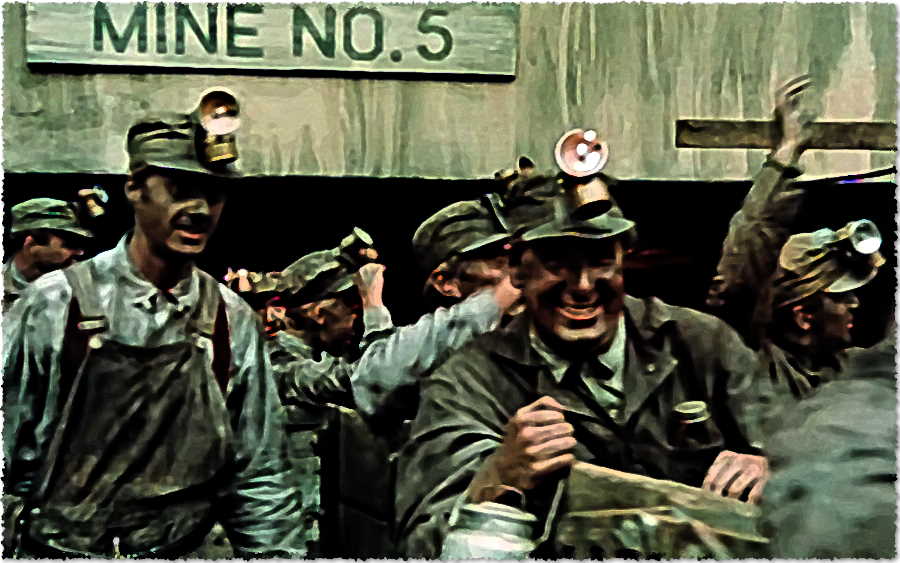 They got you fightin white against colored, native against foreign, hollow against hollow, when you know there aint but two sides in this world – them that work and them that don’t. You work, they don’t. That’s all you get to know about the enemy.

We’re disappointed with the outcome of the election in Staten Island because we believe having a direct relationship with the company is best for our employees.

In the wake of the recent unionization victories within/against corporate titan Amazon in New York, I got to thinking of the great John Sayles film Matewan, about a community of West Virginian coal miners and their families who unionize to protect themselves from Stone Mountain Coal Company and their hired guns, the Baldwin-Felts Detective Agency. It is a dramatized re-imagining of actual historical events, complete with a gallery of fictional and non-fictional characters, that brought a certain level of class-consciousness to the big screen, despite years in development purgatory and a tight budget with only seven weeks of shooting. It was positively reviewed by critics for its quality writing and performances, but flopped at the box office (what else is new?), and is only now resurging into public attention – generously assisted by a Criterion Collection DVD/Blu-Ray edition in 2019.

Smart writing, good acting, low budget, poor-to-modest box office performance: these are sine qua non to a John Sayles picture. In his invaluable book Thinking in Pictures: The Making of the Movie Matewan, Sayles makes the distinction between the sort of characters a good number of moviegoers satisfy themselves with and the sort he wants to write:

In pure generic films, character is often a matter of physical appearance or physical business, done in fairly broad strokes. The character wears a certain uniform or a black hat or a Mohawk haircut or has squeaky shoes, chews gum, giggles before shooting people and uses a nasal inhaler. There was a time when a “character actor” was someone expected only to deliver a certain type – Edward Everett Horton didn’t play a longshoreman one week and an Apache warrior the next, he played Edward Everett Horton and he did it very well. Character depth entails a complexity that is unnecessary and even unwanted in most genre films. Part of the appeal of a generic character is that the audience knows exactly what he or she will do in a certain situation – that’s the payoff. Once a character is established with some complexity, though, the audience has to wonder, and the character acts on a more human level.

What makes Matewan great is this very commitment to the “human level.” Like many John Sayles films, it puts a community of ordinary people in the foreground of an extraordinary situation, examining how they interact and clash and, in this case, unite (at least for a time) against an overbearing force.

The plot is fairly straightforward: in 1920 Matewan, West Virginia, a community of coal miners are looking to unionize in the face of recent unfair wage drops by their employers (and de facto owners), Stone Mountain Coal Company. A former Wobbly, Joe Kenehan (Chris Cooper in his debut film role), is sent by the union in Pittsburgh to assist the miners in their efforts. To counter the union, Stone Mountain brings in Baldwin-Felts agents (an excellently devious Kevin Tighe and Gordon Clapp) to disrupt worker activities, often using violent/underhanded means to intimidate the miners into compliance. Joe Kenehan’s pure-hearted idealism (he’s still a believer in the IWW’s famous “One Big Union” slogan, like a firmer Tom Joad-type) set against the machinations of Stone Mountain and Baldwin-Felts represents the main conflict of the film, along with some subplots involving the miners and residents of Matewan to push dramatic swells. But brooding over the narrative is Sheriff Sid Hatfield (David Strathairn), who remains stalwart against Stone Mountain’s incursions into city property – this is where Sayles mines into actual historical events, as Hatfield and Mayor Cabell Testerman (Josh Mostel) were involved in a real shootout with thirteen Baldwin-Felts agents who’d carried out illegal evictions in town, resulting in the deaths of the mayor, two miners, and seven agents.

I can easily imagine another film focusing on Hatfield and Testerman, with everything leading up to a bloody, Bonnie and Clyde-esque bullet-ridden extravaganza, but the final action sequence is dealt with quickly, almost matter-of-factly, and edited to reflect the suddenness and hectic quality of an actual gunfight. And Hatfield is only a secondary, albeit pivotal, character who prowls in the peripheries until violence must be meted out in vengeance.

Sayles is less interested in death-dealing (he pushes towards it almost reluctantly) as he is in the “what could’ve been” possibilities inherent in the period, and the down-to-earth wants and frailties of human beings who are pulled, on one end, by the dreams of a collective future in which their needs are met and solidified by their fellow workers, and the simplistic (and simplifying) consequences of violence on the other, represented plainly by the oppression of a giant corporation. In fact, violence is not only threatened by the corporation in the form of Baldwin-Felts, but intentionally encouraged among the workers – one of the first scenes shows the shipment of black miners (led by Few Clothes, played by a majestic James Earl Jones) into town, largely as a means of stoking interracial resentment to distract employees from unionization efforts.

There are few better than John Sayles in the (re)creation of a realistic community, and Matewan is where his talents as a filmmaker first burgeoned into greatness. See how the focusing-on of two fictional characters, the widow Elma and her boy-preacher son Danny (Mary McDonnell and Will Oldham), help evoke an entire time period/way of life. Mary’s stern-faced resilience, as well as her solitary upkeep of a boarding house, comes at great personal cost, and Danny’s fiery sermons show how deeply-set yet flexible spirituality can be – Protestant Christianity is the exemplar, in this instance, but like a pickaxe, any religion is simply a tool, and can be used to unearth gems or gouge out vitality from a heart.

Some films are immaculately wrought, but, in their failure to reach a certain level of depth, lack good arguments for greatness; others possess undeniable imperfections, but core deeply enough into the substance of their engagements that greatness becomes attainable. Matewan seems to me a perfect example of the latter: for instance, a deus ex machina in the form of foothill people rescuing Joe Kenehan from certain death at the union camp seems more in the service of plot than the clear-eyed realism Sayles is committed to everywhere else in the film; other moments like the relatively quick banding-together of the ghettoized miner camps tip-toe towards a Pollyanna’s view of race relations – but even these have reasonable (albeit brief) explanations within the narrative, and aren’t “holes” per se.

In any case, these flaws are eventually upended by the very realistic finale, where Joe Kenehan is added to the shootout’s casualty list. After a series of betrayals (engineered by Bob Gunton’s C.E. Lively, a real-life figure who was a company mole within the union ranks, and would actually gun down Sid Hatfield in broad daylight not long after the Matewan Massacre) and a young man’s murder, the townspeople elect to take up arms against the company, which has just shipped in additional Baldwin-Felts detectives. Sayles wisely gives even these mercenaries a very human moment that exposes their function as hapless tools more so than actually evil agents – and thus, the bloody confrontation. Joe, ever the pacifist, tries in vain to stop the violence, having a heart-to-heart with Danny about the uselessness of such crusades, and ends up dead on the railroad tracks. The reward for his idealism – much like Private Witt from Terrence Malick’s The Thin Red Line – is an early death, albeit tempered by martyrdom, as his desire for the One Big Union inspires Danny’s character to keep such dreams alive in the ensuing Coalfield Wars of West Virginia.

The dissolution of union into conflict is the larger note of realism John Sayles strikes, here, pointing out the great difficulty of these efforts in the face of whatever level of violence or misinformation a corporation (or a nation, or even another union, a la On the Waterfront) is willing and able to utilize. For those beset on all sides by deprivation and violent threat, how helpful is union politicking when to grab a gun and shoot seems the quicker and easier option?

It is remarkable how – despite a long and storied career in the American independent film scene – overlooked Sayles still is, especially compared to relative contemporaries like Spike Lee and the Coen Brothers. Matewan is a gritty, realistic and downright entertaining film (how many of these auteurs can even spin a good yarn, sans pretentions, the old-fashioned way?), full of not only sterling performances but great Appalachian music (Sayles uses this as a subtle foreshadowing technique, too, telegraphing Joe Kenehan’s martyrdom with the choice of hymns/lyrics) and true adult ideas. Ideas that grown, working adults would do well to seriously mull over, regardless of where they fall on the political aisle.

The Staten Island union victories, while heartening, display that labor in this country still has a long way to go, and that while it isn’t feasible for mega-corporations to use the exact same tactics Stone Mountain deployed in Matewan, corporate bigwigs are no less anti-union than before. John Sayles understands not only how to tell a damn good story, but the real course of history, as well, and Matewan’s ambiguous ending – with a shot of Danny, stone-faced, in the mines, just like in the opening scene – points to the recurrence of conflict (with streaks of hope) and Big Business’s vice grip around the decisions workers can make for themselves. It’s far from a feel-good ending, but here’s Sayles again, defending his process:

Cyclical life, a sense of continuity, good and bad, is the opposite of the favored Hollywood ending of ultimate triumph (Rocky at center ring, victorious, wrapped in the American flag). The counterculture movies of the sixties had endings that were much more downbeat but just as finite – Cool Hand Luke or Butch and Sundance or the hippies in Easy Rider all blasted dead by the forces of oppression. The finite ending sends the audience out with a definite jolt, a sense that justice (or injustice) has been done. A more ambiguous ending is a trickier thing to pull off and demands more preparation. You can’t ask people to think about things that are difficult unless you can make them care about and identify with the characters in the story on a deeper level than genre movies are usually willing or able to evoke. A Jaws where the shark remains undefeated is a great genre picture with an inappropriate ending. But when Moby-Dick rolls back into the depths in Melville’s novel it works fine, because the story is about a lot more than catching a whale.

John Sayles’s Matewan is about a lot more than a shootout between a vengeful sheriff and corporate hatchet men. Watch and learn.

If you enjoyed this analysis of John Sayles’s Matewan, check out the automachination YouTube channel and the ArtiFact Podcast. Recent episodes include a survey of photography from Josef Sudek to Laura Makabresku, an examination of Abstract Expressionism as depicted in Kurt Vonnegut’s Bluebeard, and a discussion of Hermann Hesse’s classic novel, Steppenwolf.

More from Ezekiel Yu: All Sweet Things: On Jane Campion’s “An Angel at My Table” (1990), The Spirits Drawn Down: On Wallace Stevens’s “Large Red Man Reading”, Leda And The Swan: Rubén Darío vs. W.B. Yeats