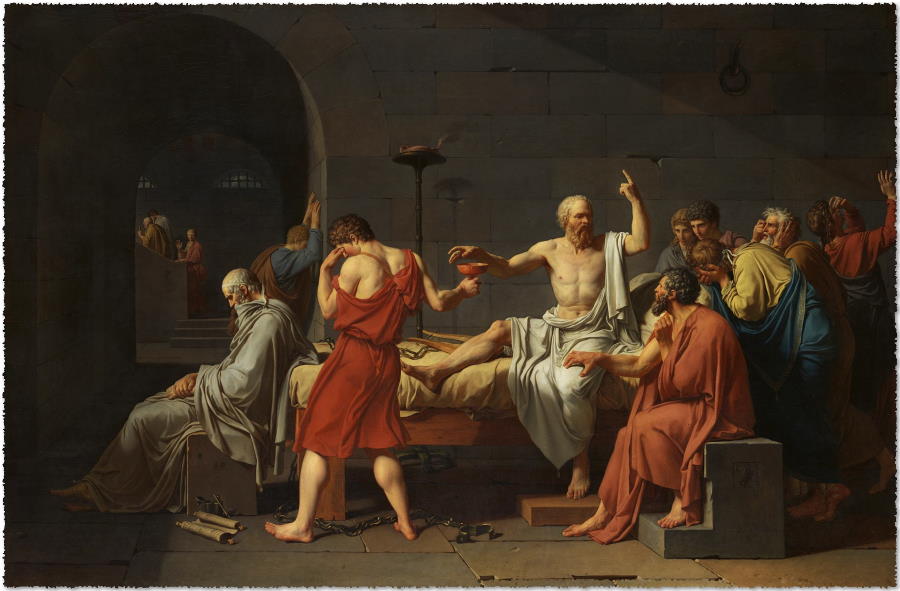 The dangerous man was on trial for impiety and corruption of the youth of the city, but he was calm even though he was facing a penalty of death. The charges were spurious, as the real reason he stood in the dock was that he was a gadfly, an irritant to the power and control of authority and he WAS dangerous—dangerous to the established order, the mores, the context of the society:

And now, Athenians, I am not going to argue for my sake, as you may think, but for yours, that you may not sin against the god, or lightly reject his favor by condemning me. For if you kill me you will not easily find another like me, who, if I may use such a ludicrous figure of speech, am a sort of gadfly, given to the state by the god; and the state is like a great and noble steed who is tardy in his motions owing to his very size, and requires it to be stirred into life.

So proclaimed Socrates in Plato’s Apology. He would be just one of a few of his breed to question the State and its citizens’ apathetic and lethargic approach to life and living. As he famously remarked in this dialogue, “the unexamined life is not worth living.”

The most important qualification for being a gadfly is being an impartial searcher for truth. One is not a gadfly if one simply criticizes and denigrates someone from “the other side.” A gadfly might, indeed, have certain political or social or cultural preferences, but that does not prevent the gadfly from critiquing “his or her own.” One cannot wear any label of identity, declare some “written in cement” position, have a rigid point of view, live in one’s own little box—and be considered a true gadfly. The TV shows, podcasts, news “specials” and the like do not even come close to this standard, as they are merely iterations on a theme: I am on THIS  side, the side of Good, Truth and Inerrancy; the Other side is Evil, always wrong, and needs elimination from public discourse. Other than Socrates, one good example is I.F. Stone.

Isidor Feinstein Stone (“Izzy”) was an investigative journalist, author, and writer, born in 1907 dying in 1989, known for his progressive views. Yes, he was a progressive but not blindly so. In his late teens he joined the Socialist Party of America, but quit due to the infighting and competing factions on the Left. No rigidity there. And though he was a member of the League of American Writers (whose members were either members of the Communist Party or fellow travelers), he left it when Russia and Germany signed the pact which allowed Poland to be divided between them. He wrote to a friend he would do “no more fellow traveling for the U.S.S.R.”

His disdain for White House press conferences as propaganda meetings, made him prefer to dig out facts himself:

I made no claims to ‘inside stuff’. I tried to give information which could be documented, so that the reader could check it for himself…Reporters tend to be absorbed by the bureaucracies they cover; they take on the habits, attitudes, and even the accents of the military or the diplomatic corps. Should a reporter resist the pressure, there are many ways to get rid of him…But a reporter covering the whole capital on his own—particularly if he is his own employer—is immune from these [political] pressures.

He never wavered, throughout his career, from his mission to ferret out truth, no matter where the chips fell.

Gadflies are forever a bother, forever biting, forever a target of the noble steed’s swishing tail. A horsefly, however, doesn’t bite for the horse’s own good. It just bites as it will, as a horsefly always does, but a social, political, intentional gadfly has a purposeful bite; the awakening of the steed.

Awakening from what? Dogmatic slumber, from living with labels, from accepting the “received wisdom,” from acquiescence to the current authority—whether legal or societal, from lazy self-indulgence. Can this be done in today’s world? In tomorrow’s? In a modern, fractured society, no one bite will be effective. Biting one side or the other will either be ignored or dismissed (“You saw that story on RT/CNN? Well, that’s just Right/Left propaganda!”). Our society, our government, is a steed with many bodies, many minds, many twitches. And facts are not bites which draw blood. They are merely the inept and prejudiced opinions of one faction, a faction which is obviously on the side of the devil. No faction considers itself asleep, unaware of The Truth; it’s the OTHER side which is woefully ignorant and purposefully evil. In an age where facts have little meaning, scant weight, and more spin than an electron, someone like I.F. Stone—who spent a lifetime digging for facts—would be nonplussed, if not angered, to see how little bite a fact has for us: barely a pinch; the steed  hardly notices, if at all. So what can be done? One bite is not enough. We all have to bare our teeth a bit. When the Loudoun County School Board was confronted with concerned and angry parents, there was massive pushback—steeds not only do not like being bitten, it is an affront to their majesty. But those parents kept on biting, and some movement toward an acknowledgement of their position, their concerns, has been noted; some resignations, some attention in the media on both sides. Americans learn, from an early age, starting even before kindergarten, to behave, sit down, be quiet, accede to authority figures, keep questions respectful (ones parents and teachers are willing to entertain), and keep their opinions to themselves. School mission statements always contain something about teaching students to be critical thinkers, but that’s just a sop to Cerebus.

Socrates spent a lot of his energy and time speaking with the youth of his city, people naturally disposed to be frustrated and disgusted by the status quo and naturally disposed to seek answers. Perhaps any potential gadflies, like the parents of that Virginia school district, should start there and not stop until—at least—the steed begins to move.

If you enjoyed Len Holman’s take on the gadfly, check out the automachination YouTube channel and the ArtiFact Podcast. Recent episodes include a dissection of Kurt Vonnegut’s classic novel, Galapagos, a philosophical look at kitsch, aesthetics, and NFTs with UK painter Ethan Pinch, and a long discussion of photography from Alfred Stieglitz to Fan Ho and Vivian Maier.

More from Len Holman: Phryne and the Mysteries of the Female Breast, Labiaplasty: The Body as Enemy, Vaccine Mandates vs. Carol Doda, The Problem of the Criterion: A Practical Case