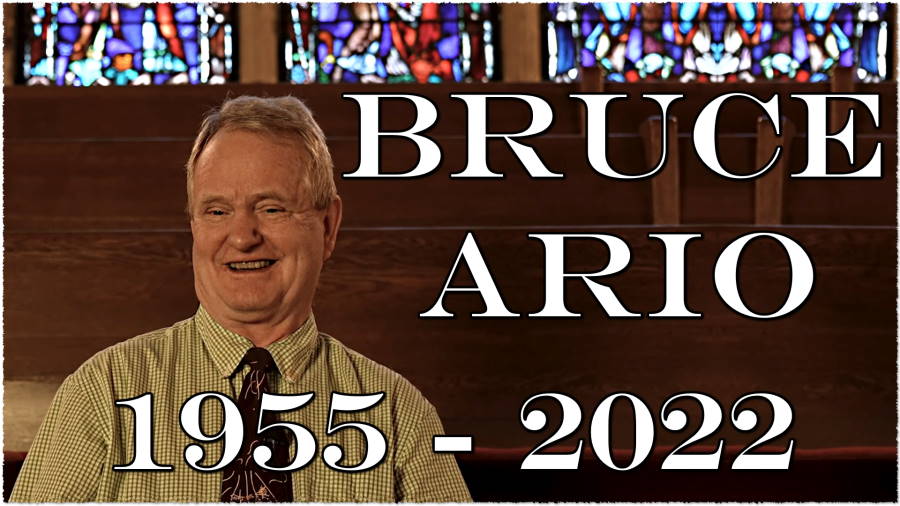 [Our first video memorial to Bruce Ario’s life and work can be found here.]

There are many writers that impress vision upon a reader. But rare is it that you can meet one. Bruce D. Ario (April 29, 1955 – August 6, 2022) was one of those writers. I first met him in autumn of 1999 and I continued to know him online until his death in 2022. That I am even typing this is still a shock, as his death came suddenly. He wasn’t ill, but rather he fell and hit his head, according to his obituary. It is difficult to imagine a future without Bruce, as he was always eager to read my and Dan’s work, and his essays and comments were always unique. In fact, I can’t imagine a Minneapolis without him—the buildings, the streets, and the church—all had become part of him. Just how does a city go on without its Cityboy?

Bruce was a regular at the Uptown Poetry Group, where I would see him twice a month from 2000-2003. We’d all take our turns sharing our poems and it was normal for him to go last, after everyone else. This is perhaps indicative of his personality—others first, himself second. His ‘signature’ poem was something that earned its own name—called the ario, which consisted of ten lines written in 3/3/3/1 format. The last line would often serve as a baseball bat knocking the point home. His language was simple but not simplistic, as he excavated his ideas from feeling. His worldview was matter of fact with an underhanded insight. And one would need to listen, as his craft could easily go overlooked if not paying attention.

Bruce was modest, but he loved when his work went noticed. When I told him that I mentioned him in my Stevie Smith essay, he messaged me several times wondering when it would be published. In it, I’d said, ‘In many ways, her work resembles that of Automachination contributor, Bruce Ario, in how the language comes across as simple, yet when assembled together one is approached with something much deeper.’

Bruce’s poetry shared much in common with Stevie Smith and poet Hazel Hall. Even Emily Dickinson, with her odd focus on the small—her short lines erupting into something grander. Yet at the same time, Bruce Ario was one of a kind. While not everything he wrote was great or even good, when he was good, he was really good and when he was great, he was really great.

As example, here is an ario about his early days before finding the church and ‘turning his life around,’ so to speak:

My life sashayed into a train
Running far faster than legal limits.
I was thrown out of the passenger seat like a pit.

There I met dogs, thieves and victims
Occasionally with light in their lives-
A place to rendezvous and start up

For a match I could only sense.
I couldn’t hardly rise to take my seat
Among the others who didn’t know

The poem, while simple to read, says much about his mind. And yet he chooses a contrasting word like ‘sashayed,’ relative to the rest of the text. His life, this once back-and-forth, unstable thing, ‘sashayed’ into a train that was ‘running faster than legal limits.’ Is the speaker dipping into crime? But then he is ‘thrown out of the passenger seat like a pit.’ The simile of ‘like a pit’ is classic Bruce, as it hits the point and is a nicer way of avoiding a cliché like, ‘faster than the speed of light.’

There I met dogs, thieves and victims
Occasionally with light in their lives-
A place to rendezvous and start up

For a match I could only sense.

So now, we get an idea that the speaker has stumbled into other troubled folks like him who, with the occasional ‘light in their lives’ have found ‘a place to rendezvous and start up/For a match I could only sense.’ Is this a halfway house, perhaps? A church? Somewhere lingering beyond? And is this a match of hope that might promise light?

Then, the poem ends:

These final lines exemplify how Bruce could subvert simplicity within his verse. That the speaker ‘can’t hardly rise’ to ‘take his seat,’ seems like a contradiction. But the speaker is undergoing not a scope, but an apparent scope. Once again, the word choice is interesting and layered in meaning. Scope can imply seeing, as in microscope or telescope, but also an investigation, possibility, freedom, chance. But it’s not that he can’t rise, but that he ‘couldn’t hardly rise’ among the others who, like him, lack answers as to where he was (in life?) or where he would be heading.

Here is another clever poem that reads rather straightforwardly, but subverts with poesy:

Sensitively rendered ones are good.
And the unexpected ones as well.
I especially like bright, shiny ones.

Oftentimes I must stoop to get them.
Or grasp them out of the air.
But that’s hard if it’s windy.

Some graciously appear of their own right.
While others are dug out.
Pulled, stretched, or excavated.

It’s the getting I’m after.

Notice we’re never told as to what the speaker is referring. Is it rocks? Diamonds? Flowers? Fruit? Or something else altogether? Does it matter? The end line offers the answer.

Now, here is another ario that offers a different perspective. In ‘Where Has It Gone?’ we are presented with something that has ended. Is it a game? Summer? To what exactly the speaker is referring doesn’t matter, as Bruce wrote from his immediate emotional experience:

Where Has it Gone?

No, NO. It’s time to gather poles.

Upon first read, notice the music within:

Then, here is the odd comparison reminiscent of Emily Dickinson:

Burning up the calendar
Like a gas guzzling SUV

This is such an odd simile and yet it works. Then:

No amount of politeness will stop even the pleasant things from ending. There is nothing that the speaker can do to remedy this fact, as indicated by the line, ‘And I could have never saved/even a blade of grass,’ wherein the use of grass is not only a reference to summer, or perhaps some game in the field, as well as what is used to blow a whistle. Again, clever use of word that serves its purpose.

Then, the last line: ‘No, NO. It’s time to gather poles,’ is read like a command, which contrasts to the ‘politeness’ in line 4. (Perhaps this is a game after all?) This is simply a great poem. And knowing Bruce, he probably did not spend much time writing it, (as it likely shot out of him ‘like a pit.’) Rather, Bruce Ario was a writer who burned brighter with instinct than with reason.

At the time of this essay, it has not even been 24 hours since I learned of his death, and I still am seeking words to describe my sadness. And Bruce is the type of person who would say something like, ‘I’m sorry my death ruined your evening.’ Some of my fondest memories involve the Uptown Poetry Group, where we would meet in a thrift store, and Bruce would often offer a bin of brownies or cookies while we discussed our verse. And Bruce was not only a group regular, but he was also a star. Bruce remained in touch even after the group dissolved, wherein his last Facebook post was dated on August 6th, 2022. Until his last moments, he remained devoted to life, to art, and to hope. He loved Bob Dylan and Jesus Christ. Not only will I miss him dearly, but also it will be a struggle to fathom a literary group without Bruce.

Something happens when an artist dies. They go from being an artist in the present to one in the past. Perspectives shift and audiences begin to view them differently. Now, Bruce the man exists only in the past, but his work is still present. While I plan to write more about him in the future, I shall end this essay with one of the last arios he shared online. Moments happen, and no amount of ‘politeness’ can bring them back. Years pass and eventually we become the past. Yet the moons still move. Time and life continue. Reading this now, I feel that these ten lines summarize his wisdom, his talent, and his life just as it was:

Just as it Was

The moon isn’t quite the way it was
Last month it was over there
And it seemed lighter in the sky.

But I’m on the same bus bench
As I have been for some time now
Whether tonight or the last 30 years.

Change seems so difficult
Genuine change
Anybody can change clothes

But few can move the moon from there to there.

If you enjoyed this overview of Bruce Ario’s art and life, consider supporting us and get patron-only content on our Patreon page. This will help the growth of this site, the automachination YouTube channel, and the ArtiFact Podcast. Recent episodes include a discussion on Richard Linklater’s “Before” Trilogy, a survey of photography from Josef Sudek to Laura Makabresku, and a discussion of Hermann Hesse’s classic novel, Steppenwolf.