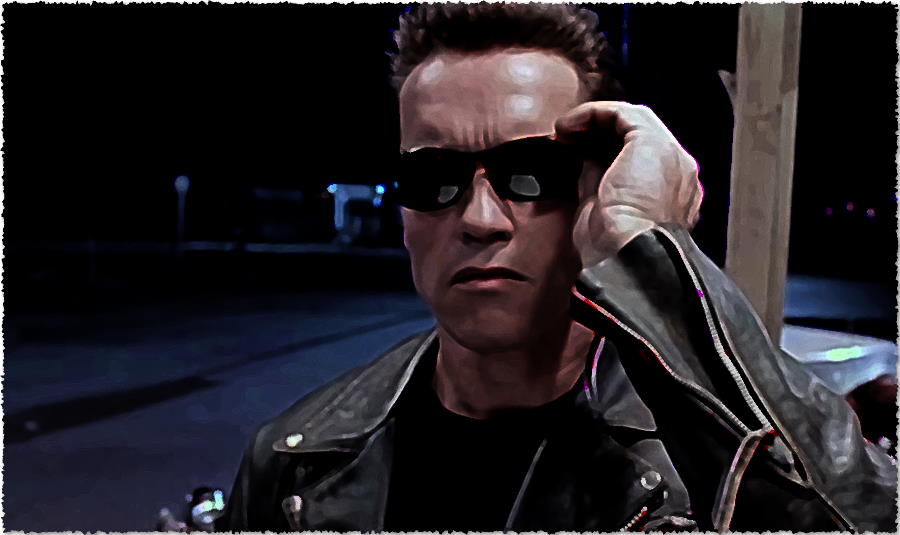 [To watch a discussion of The Terminator series with Jessica Schneider, Alex Sheremet, and UK painter Ethan Pinch, click here.]

I recently reviewed Richard Linklater’s Before Trilogy, wherein I noted the hardening of Celine’s character. We see her in the first film, where she goes from a Romantic idealist, to the third film, where she expresses both disillusionment and anger within her marriage. While Celine’s evolution is not as extreme as Sarah Connor’s (Linda Hamilton) in James Cameron’s Terminator series, over time we witness both women engendering a toughness to their respective characters.

The first Terminator film is well-crafted, excellent sci-fi. While it lacks the emotional and intellectual depth of Terminator 2: Judgment Day, craft is still omnipresent. My reasons for wanting to review The Terminator films alongside Bergman, Bresson, and Tarkovsky is not to make claim that they rank among those other auteurs, per se, but rather to debunk the notion that 1) Hollywood commercial films can’t be great; and 2) if something is an action film, then it must immediately lack depth. While I do think that most sci-fi genre is trite and doesn’t qualify for the greatness canon, with well-sketched characters, transcending the genre is most possible. Also, the other problem I have is sci-fi lovers who rank ‘plot-driven’ narratives above everything else. (Were that true, there would be no reason to ever rewatch anything.)

Terminator 2: Judgment Day, while released in 1991, is set four years later in 1995 and John (Edward Furlong) is a ten-year-old child. He lives with his detached foster parents, while his mother (Sarah Connor) resides in a mental hospital. She often speaks of a nuclear annihilation occurring on August 29, 1997, wherein three billion people will die. No one believes her. Likewise, Skynet is at it again in its attempt to terminate John, who ultimately grows up to become the leader of the Human Resistance Movement. While Skynet’s first termination attempt aimed to kill Sarah before John’s birth, the second is aimed to strike at John himself, this time via a T-1000, played by Robert Patrick. Furthermore, John (that is, future John 35 years from now) also sends a T-800 Terminator (Arnold Schwarzenegger) back through time to protect his ten-year-old self.

The T-1000 is not an evil character, merely menacing. After all, he is only doing what he has been programmed to do. Espousing no emotion, he never smiles or raises his voice. His face is nearly forgettable, and he moves about like a lithe snake—streamline in his approach and immediate in his reaction. Robert Patrick is brilliantly cast. Likewise, Sarah has spent her hours building her muscle within the asylum. No other thoughts seem to occupy her. She is emotionally reactive, tough, and serious. Just comparing her to the first film, one might think she is a different character, but rather, Linda Hamilton pulls this evolution off well. We can see how the years of gaslighting within the asylum, coupled by no one believing her, would erode her timidity. And John, while wild and rebellious (he regularly hijacks people’s PIN numbers), also has empathy. As example, when interacting with the T-800, he is forced to lecture the machine on how it is not ok to kill people. In many ways, John is the parent in this situation, as the Terminator merely asks, ‘why?’ over again, as a child might. ‘What do you mean why? Because you can’t,’ John insists.

With his myriad of action film credits, James Cameron is not a director that necessarily handles emotion or vulnerability well. While Titanic was marketed as a ‘love story,’ Cameron’s true love story exists within Terminator 2, between John and the Terminator. Yes, while the love is one-sided (since the Terminator is incapable of feeling emotion), by the film’s end, the machine seems to develop a sort of cognitive empathy in its attempt to understand why people cry. ‘I know now why you cry,’ it says. ‘But it is something I can never do.’ Moreover, when the T-800 is being lowered into the furnace, the scene is rife with genuine pathos and not forced sentiment. In many ways, the Terminator has become John’s lone ‘father figure’ and protector, and so when it must be destroyed, it is only natural that John is unable to control his tears.

The special effects, while impressive in its day, hold up well largely due to the quality storytelling. I’ve often argued that over the years as the filmic effects got better, the storytelling got worse. Or in other words, before directors could rely on computers to do all the work, they were forced to write better scripts. Thankfully, Terminator 2 avoids the hollowness of ‘action tells all,’ which is a trap that many Hollywood films fall into. (Michel Bay, anyone?) And just as with the first Terminator film, there are multiple paradoxes and suspensions of disbelief. If John is so important, why not just hide him in a tomb, surrounded by bulletproof jackets while Sarah and the T-800 destroy Cyberdyne Systems? And if Skynet’s plan is to kill John, why not send the T-1000 back to an even earlier time—before the T-800 can arrive? Furthermore, if the T-1000 can replicate anything, why not replicate the T-800, lure John, and then kill him? Of course, these questions must go overlooked, lest no film could exist.

Frustrating it is when audiences have come to expect a certain level of action in storytelling, so much so, that they depend on it. Yet rare is it a film employs both—good character and action without compromising the intelligence of the writing. In his review, Roger Ebert notes: ‘Schwarzenegger’s genius as a movie star is to find roles that build on, rather than undermine, his physical and vocal characteristics. Here he becomes the straight man in a human drama – and in a human comedy, too, as the kid tells him to lighten up and stop talking like a computer.’ It is true that while we witness Schwarzenegger’s interactions, that we view him as though he were painted out of a Kurt Vonnegut novel. For him, all he knows is to terminate and to protect—there is no in-between. Gone is the human nuance that a machine might understand. Rather, he must obtain that from John, who tells him to ‘not act like such a dork all the time.’ I mean, why isn’t it ok to kill people? John never gives him a real answer, but only tells him, ‘You just can’t.’

As contrast, Sarah Connor does not possess the natural aplomb as Ellen Ripley (Alien), as she remains emotionally reactive, and at times volatile, regarding her surroundings. (Just think of the scene where she breaks Dr. Silverman’s arm and is ready to pump his neck with Liquid Rooter.) But she does command respect, strength, and a militaristic approach that is believable, albeit she had to train herself to achieve it. She is tired of not being believed.

I first watched Terminator 2 in the theatre when it first came out on a 4th of July weekend, just before I got into poetry. A few years later, I purchased The Collected Poems of Sylvia Plath, wherein reading two poems of hers reminded me of a particular scene within Terminator 2. It is the scene when the T-1000 is left frozen by liquid nitrogen, and as the machine attempts to walk, its limbs break apart. This image has always reminded me of Plath’s poem, ‘Event’:

My limbs, also, have left me.
Who has dismembered us?

Then, when the T-1000 is thawing, we witness the liquid metal, as it coheres like mercury beads from a broken thermometer. Here is the ending of Plath’s poem ‘Thalidomide’:

The glass cracks across,
The image

Now, rewatch the scene and you can’t unsee it. And who is to say that actionable art can’t contain poesy?

If you enjoyed this review of James Cameron’s “Terminator 2: Judgment Day”, consider supporting us and get patron-only content on our Patreon page. This will help the growth of this site, the automachination YouTube channel, and the ArtiFact Podcast. Recent episodes include a discussion of Ryusuke Hamaguchi’s “Asako I & II” and “Drive My Car”, a catalogue of Elon Musk’s stupidest claims, and a critique of James Cameron’s Terminator films.