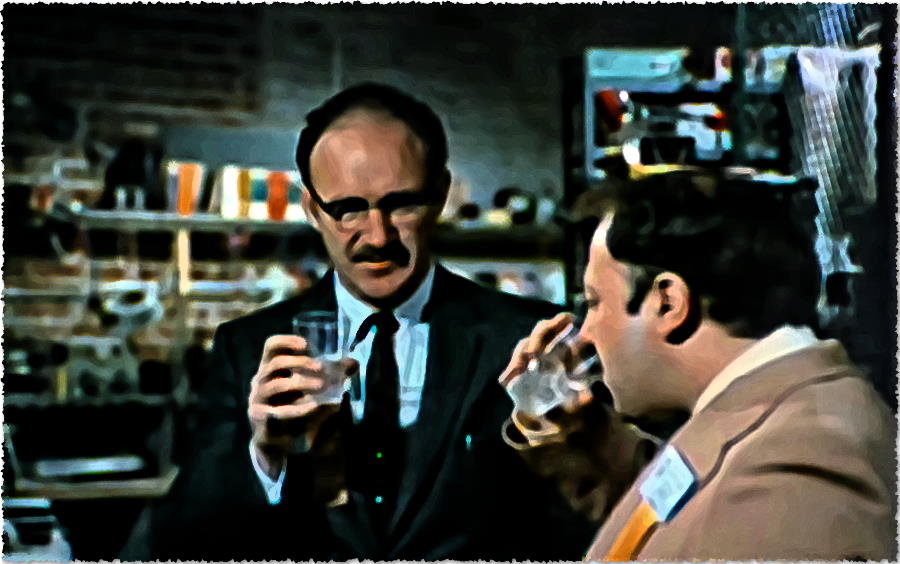 Francis Ford Coppola gained his reputation through fastidiousness and dedication. Hearts of Darkness, the explosive behind-the-scenes documentary made partly in parallel and then in retrospect with Apocalypse Now, portrays a director with vision, but one wrestling with his own ego, pretentiousness and darker nature. His obsessive tendencies towards filmmaking are evident in a lot of his earlier works, culminating in Apocalypse Now, after which his filmog descends into nothing but laissez-faire mediocrity and stunning failure. This dramatic rise and fall could, and has been, attributed to the nightmarish production of the aforementioned Conrad reinterpretation.

The Conversation is an achievement foremost as a work of character insight, with Gene Hackman delivering a formidable performance as Harry Caul. Caul is an engineer who considers himself an artisan. His field is surveillance – specifically, the recording of dialogue between guilty parties. We open with him organising an impressive feat of monitoring on a young couple in a bustling city square, who seem to be concerned that the woman’s jealous and influential husband will off them if he ever finds out about their infidelity. The contract is for said jealous husband. Through using a sniper-scope and directional microphone, and several actors and hidden bugs, Harry manages to capture the damning evidence.

He is then embroiled in a labyrinthine corporate espionage plot, featuring a camped-up Harrison Ford and a sweaty Comic-Con for surveillance personnel, and a slightly predictable twist leading to a quite effective ending meltdown. In his review of The Conversation for his website Cosmoetica, Dan Schneider makes many cogent points about the film’s symbolism and technique, pointing out the significance of the surname Caul in reference to an amniotic shroud, and the camera panning to follow characters a little delayed and voyeuristic, and Caul’s penchant for intense privacy. This speaks to something true of our world, especially now in an age of utmost visibility: you can never act as if you are unmonitored, because there is the enormous chance you are. Even at the time of writing Dan’s review we were a less openly monitored society, so the film’s relevance has only increased and become more relatable. Caul’s raincoat and name indicate a subconscious need to feel protected from a ruthless world schema, one that he knows too personally.

The Conversation came, apparently, from Francis Ford Coppola and Irving Kirshner talking about espionage, and the belief that if you wish to be unheard by audio equipment you should talk in a crowd of people. Kirshner then pointed out there are microphones that can pick a single voice out of a rabble of people, et voila. Caul is someone who knows the incredible potential to transcribe all communications, and can never return to ignorance of it. By volunteering his expertise, he is now a player in that game. Maybe Coppola wanted to opine on his own visibility as a famous quantity post-Godfather; but maybe this – as Schneider points out – comes from the stated parallel to the protagonist of Steppenwolf, Harry Haller. Said protagonist had gotten into trouble for his explosive anti-war treatise in the local German newspapers, and was trapped in a prison of his own making, of his own subjective belief systems about how humanity and their world functions. Caul and Haller are similar in this regard – Haller is claustrophobic due to his depressive outlook on humanity and the bourgeoisie, Caul is imprisoned by his professional paranoia. Both probably have extremely good justifications for this, and are often proven correct, but they are only put there by their own subliminal maxims.

Can the same be said of Francis Ford Coppola? In a way The Conversation, as well as the acclaimed sequel to The Godfather released in the same year, acted as the propellant to Coppola’s career implosion. This is all relevant, as Coppola and his protagonist Harry Caul have a porous membrane between them. Coppola clearly feels a certain commonality for his lead (and was reading Steppenwolf while writing the script), and that injects the needed pathos to the character’s journey. Coppola and Caul are men obsessed – and that blinds them to the punishing impact their anxieties have on others. The urge for perfection can be toxic and can have only negative consequences. Nuclear physicists designing the atom bomb, virologists concocting mega-pathogens, they are likely all fastidious and perfectionist, but blinded to their greater malevolent influence. The impassive evil of the craftsman, like a director who forces their cast into inhospitable regions and puts them in mortal peril to perfect his dream. Harry Caul is plagued with guilt about a previous job, one in which the subjects of the recording were murdered. He is a praying man, and feels the need to confess when stripped of his defensive barriers. But without his obsession he is just an emotionally unintelligent and mediocre person, his life robbed of its colour.

Francis Ford Coppola diegetically tells us this through his framing of scenes. Despite being in a large space, The Conversation’s opening shots have a tight focus on the couple weaving through the crowd. We feel claustrophobic as the camera deliriously tracks them. Throughout the rest of the film, the only time we see Harry in a wide-shot or large-seeming space is in his workshop, his own little Olympus. The rest of the film is spent in tight close-ups, almost sickeningly close, Caul often seeming to be in a Harry Caul sized bubble. This speaks to his anxieties and has a deliberate effect on the viewer, like a rising tension with no relief. Then, when a plant for the corporation is seducing Harry in his workshop, the shot-reverse-shot becomes gradually tighter and oppressive, until we finally learn that Harry’s insecure rival in the surveillance industry had been recording their intimate exchange.

When information, intelligence and data becomes the toolkit of the 1%, and their dominant means of intimidation, coercion and manipulation, suddenly all human interaction feels on some level vulnerable. The willingness to offer anything private becomes a sign of enormous trust, which might be why Caul confesses his deepest anxieties to the young woman from the square in the movie’s sole dream sequence – as a means of getting even, and wiping the slate clean. Caul’s unwillingness to share with his apprentice, his lover or even his employer ruins his relationships with all of the above, the latter having lethal consequences. Like all great tragedies, his singular focus leads to his own personal hell. When the young couple turn out to be the murderers, and the victim Harry’s jealous client, Harry has inserted himself through second-guessing into a complicated situation with ruthless, amoral people. In the film’s final scene, he is playing his talismanic saxophone along to jazz records, and Ford’s character calls him to tell him he is being watched, and plays back his music through the phone to prove it. Harry destroys his apartment, even smashing a figurine of the Virgin Mary, all to find the bug. When he can’t, he resumes playing saxophone, his home in tatters around him.

Unfortunately, when treated through a modern lens The Conversation has an ineffable ability to fall flat. Maybe it’s the supreme sophistication of modern surveillance, which makes this very analogue regression seem like the unsatisfying tip of a larger and now more sinister issue. The film has thematic reflections with Polanski’s Chinatown; based on the investigative element, the character study of a ruthless surveiller, the depressing and redundant culmination of the mystery. When compared with Chinatown, the strength of that film comes from its visceral sleazy textures, and its grounding within real political corruption and cultural zeitgeist. As Schneider mentions, the shadow of Watergate hangs over the movie, but by so tightly focusing on Caul the film loses a more delectable offering in the aesthetic of surveillance itself, the moral implications of it and global geopolitical commentary. Maybe Caul’s Catholic guilt rings a little simplistically compared to Gittes’s defensive nihilism, covering a more vulnerable and hopeful essence. Maybe it’s just I would gladly fuck Jack Nicholson even in his octogenarian degradation, whereas Gene Hackman looks like his only elation would come at buying choice feet pics on Only Fans. Overall, The Conversation is over-hyped, probably a case of supreme competence being mistaken as high artistry.

If you enjoyed this review of Francis Ford Coppola’s The Conversation, check out the automachination YouTube channel and the ArtiFact Podcast. Recent episodes include a breakdown of Elizabeth Barrett Browning’s Aurora Leigh, a dissection of Kurt Vonnegut’s classic novel, Galapagos, and a long discussion of photography from Alfred Stieglitz to Fan Ho and Vivian Maier.

More from Marc Magill: How the World Rots: “Ghost Dog: Way of the Samurai” by Jim Jarmusch (1999), On Stimulation: “Koyaanisqatsi: Life out of Balance” by Godfrey Reggio (1982), Importance of Movement: On Akira Kurosawa’s “Throne of Blood” (1957)