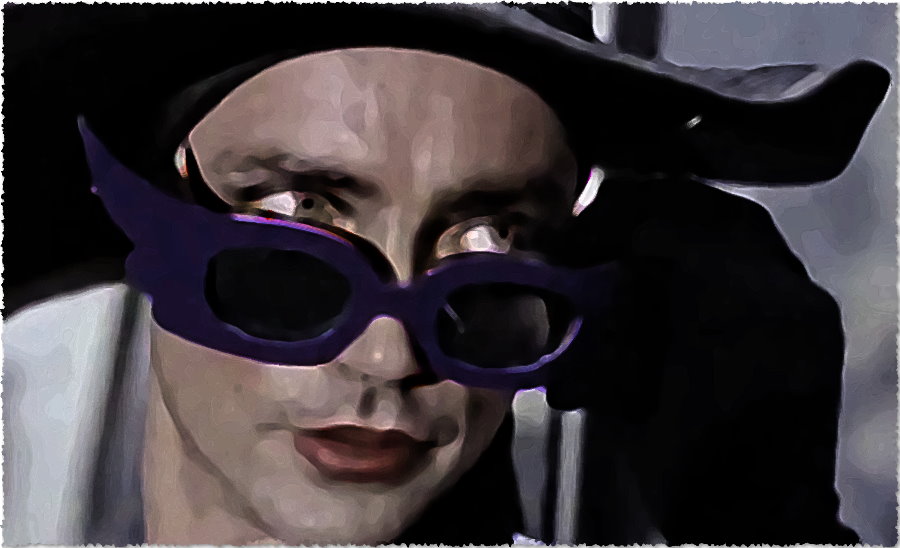 Rainer Fassbinder is one of the critically important voices in 20th century cinema – in fact, he’s good enough to make a boy jealous. He is known not only for his rapidity in his process, but his uncanny ability to extremify the positive points of a movie while glossing over the unimportant features. Unlike his contemporaries Kubrick or Coppola, he wasn’t at all fastidious. He had a laid-back and European approach to his process, instead of the furious quasi-mysticism seen in a lot of American filmmakers operating in this period.

His films are characterised by an austere and stripped back quality to the visuals, one very much in line with the French new-wave. He is an heir-apparent of Brecht – his start in theatre gave him that edge, or innovation; he always stood out from Herzog and Wenders. He captures atmosphere through amazing attention to sound design – dialogue either blending into the overbearing noise, struggling against it, or coming through crisply from silence like the worst thing you’ve ever been told.

The visual magic of his cinema is that despite his subjects being audaciously simple, they are brought to life with a restrained formal complexity. Evidently, each film has a unique atmosphere, like a fingerprint, one established in composition and diegesis. Ali: Fear Eats the Soul is domestic and melodramatic and its visuals reflect that, almost soap operatic, and paranoid. Satan’s Brew is an anti-humanist nightmare and farce, characterised by its unappealing, ugly compositions and palettes.

Rainer Fassbinder’s career has persistent themes; from Germany’s national character post-WW2 – particularly the Berlin Wall – to power dynamics and their sexual thrill, he has always been a writer and director with real insight into his characters’ psychological realms. He is fascinated by the overnight transition from a repressive autocracy to a supposed liberal democracy, and those who survived that regime change alive and anonymous. While watching his films, we are invited to think of older characters: “what did they live like? did they fight?” He is fascinated with the supposed adoption of new social values, just to be fascism in another form. In Ali: Fear Eats the Soul, we are invited to wonder whether a society only free from the reich for two decades is ready to accept the protagonists’ interracial, intergenerational romance. Coming from a polyamorous and gay creator like Rainer Fassbinder, he likely had first-hand experience of yesterday’s attitudes – in fact, the actor who famously played Ali was Fassbinder’s lover.

The Third Generation is a bizarre movie to quantify. It’s simultaneously funny and haunting, absurd, and distressing in its clinical perspective – the contradictions serve to form one of the most refined portraits of the post-modern cultural condition. It is a movie unlike a lot of others. Above was the idea of his movies bearing a particular fingerprint – this is a political thriller, but the way it portrays its stake on modernity is chaos, loud and persistent noises, sickly light, overcast evenings: distraction, 24/7, year-round stimulus. If only he were alive today. The characters are stressed to the degree of meltdown, the only ones flourishing are those who through their own exertion of power rest at the top of the food-chain, as their joy comes from the repressions of those around them.

The Third Generation follows a group of middle-class 30-somethings, all of whom know each other from being active in a cell of revolutionary terrorists. They hold some leftist values as evidenced in their introductions, but they never have much of their belief system exposited on – it’s unneeded, the audience understands thoroughly the character’s beliefs by their throwaway comments and general behaviours. The only clue we get is that their activation phrase is a quote from Schopenhauer: “the world as will and representation”. Their plot to stage an attack is thwarted, however, as they are actually being set up by their leader August on behalf of an industrialist named Lurz, in a bid to increase social tensions sufficiently to boost his sales of security computers. Lurz employs one of the revolutionaries, Susanna, whose husband is fellow revolutionary Edgar, whose father is Gerhard Gast, the inspector general of the West Berlin police force. Gerhard is on to Lurz’s schemes, and has him tailed for weeks. Soon the delicate mixture of vested interests and double-crosses and resentments boil over into violence, as they always will.

This is a matter of philosophy, a subject that Rainer Fassbinder establishes and then continually demonstrates, subverts and argues with all through pure subtext. This is from Schopenhauer’s seminal text The World as Will and Representation. The idea is, in defiance of the romantic and optimist Kant, or Hegel, that all of existence is governed by the end-to-itself Will, which is the motivation for all human actions. This can be substituted as desire, lust, jealousy, passion. Schopenhauer argues this is the source of all human misery and cruelty. Similarly, reality doesn’t necessarily exist in itself, but is instead a Representation by all willful beings, to support their own narratives and beliefs about themselves. The revolutionaries aren’t right and they are – the world in representation is a corpo-fascist state, and that is supported by Lurz and his schemes as diegetic qualities of the film – he is a puppet master, out to further his profits on the back of others’ dreams. However, Lurz’s beliefs about the world, as a craven nest of liars and hypocrites – demonstrated in his conversation with Gast about Solaris over the Autobahn – is also true! From what we see of the “revolutionaries”, they are serial neurotics, posers, bored rich kids, dissatisfied housewives to bankers. One is even a rapist, which is never confronted or bemoaned by any of the lot of them.

Rainer Fassbinder reveals a portrait of a world begat by power as a tangible substance, one that morphs fluidly between every social connection the individual has. The Third Generation paints in broad strokes, but their circumstances indicate so much specificity to their psychological landscapes. Gast is monstrous, but he is disgusted by a polite and feminine affect life has post-WW2, where he was no doubt previously a Nazi soldier. Lurz is a well-educated opportunist, who excuses his own moral bankruptcy with an unremitting streak of cynicism about mankind. Susanna is repulsed by Gast, but has a psychosexual need to be demeaned by him. Edgar’s grandfather would say that this is a product of a generation without war, that Schopenhauer is a philosopher for those types – weak, without motivation. But they are guided by their own will as much as he is, and due to their differences in the world they occupy, their representations, they are all as disgusting as one another. In 2022, it’s hard to argue with that surmise of human perception.

Lurz says a very telling line – the movies have to be sad, it’s what lets our lives be so funny. Schopenhauer had referred to the arts in a similar way, summarising their importance as distracting from the torrid affairs of Will. It allows us to see another representation and free ourselves from our own – in a way, Rainer Fassbinder framing his art this way is quite uplifting. Why does Lurz’s line make you feel so bankrupt, however? The only humour found in The Third Generation, at least between characters, is when they try and demean one another, or destroy their credibility. Their escape from their miserable representations are in stepping on the backs of their friends, and those who are vulnerable. It’s a potent observation – we might feel enormous pathos for others in fiction, while in the same day reveling in the misery of those around us.

Rainer Fassbinder, when directing a thriller, layers thick gobs of eroticism and intrigue. He is a director worth diving into, who died tragically young. Maybe this is why he’s seen so favourably by history – he never had the chance to fall from grace. What his belief systems were are evident the more you imbibe, but it’s clear he saw the world, and his contemporary Germany, in a particular and nuanced way that he had little trouble portraying convincingly. He saw a species whose greatest trouble was perceiving with objectivity, and perceiving each other with empathy. A species where objectification of each other is unavoidable, and camaraderie might just boil down to a similar, shared canvas of representation.

But the meat and potatoes in a Rainer Fassbinder is also that simple but striking visual panache, as well as auditory presentation. In The Third Generation, Fassbinder’s most amazing aesthetic decision is in the constant noise that permeates the movie – the modern age is a place that always hums with information, characters listen to news reports and audiobooks over the television over music, it swells their environments to the point they groan under the strain. Information overload, streaming parables and recorded soliloquy. The film is punctuated by random passages procured from infomercials, and from sexual exchanges and adverts found scrawled on walls in Berlin, all asking for someone to impose their power on them. These function as act-breaks, forwards, subtitles. Their font is Arial-adjacent sans serif, and is a lime green projected across the screen, it scrolls as if words on a computer screen. These segments feel like pleading: please, give me what I think I desire, what my Will tells me I want. Shot compositions follow actors through labyrinthine apartments deliriously, then fall suddenly still when they find their striking visual. Background, the face of Franz as his lover dies of a heroin overdose. Foreground, a leather gloved hand turning the dial on a Bakelite telephone, trying to find someone to help dispose of her body.

Silence falls only when the revolutionaries go off the grid, where the noise of modernity is briefly quiet. Is this a relief? When the noise and distractions disappear, what’s left? Your ideals are selfishly motivated, and pursued selfishly. You are trying so hard to be something, a particular mental image of yourself. Then, you take a critical step forward, you have passed the bluff, and now you have plenty of room to think, were you always the butt of this joke? Was the world you were fighting so desperately a product of your own flawed model? When Lurz – kidnapped by his own manufactured terrorists and forced to record a ransom video – smiles at the camera, was this really his plan, or has he also fallen prey to representations?

If you enjoyed this review of Rainer Fassbinder’s The Third Generation, check out the automachination YouTube channel and the ArtiFact Podcast. Recent episodes include a survey of photography from Josef Sudek to Laura Makabresku, an examination of Abstract Expressionism as depicted in Kurt Vonnegut’s Bluebeard, and a debunking of Internet sciolists such as Jordan B. Peterson and Christopher Langan.

More from Marc Magill: Quiet Bloodletting: Tax Avoidance and the LadBaby Distraction, Fastidious Vice: On Francis Ford Coppola’s The Conversation (1974), How the World Rots: “Ghost Dog: Way of the Samurai” by Jim Jarmusch (1999)