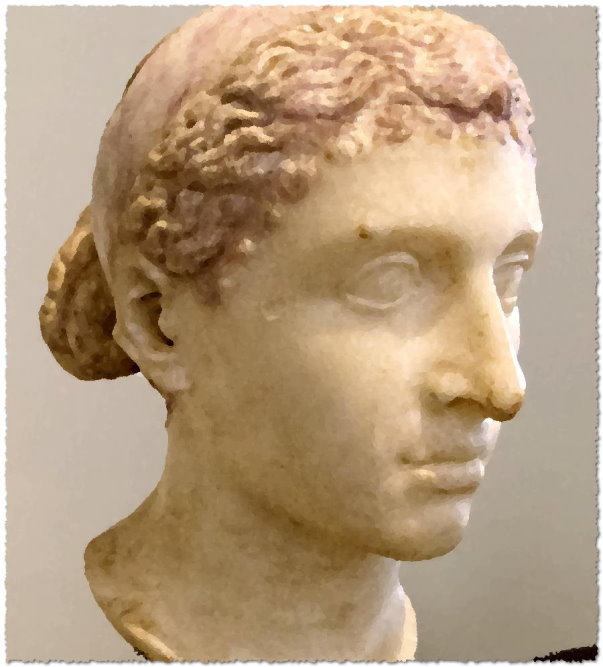 There are lists for everything, all open to the public view—everything from “The 10 Most Beautiful Left-Handed Women” to “The World’s Tallest Athletes” to “The Most Influential People on TikTok.” There is even one for charismatic people—as if there could be a definitive list for an attribute so elusive, so ethereal, so magical, as to be almost mythical. Sure, there are “influencers” in today’s media-circus world; there are media stars, sexy MMA girls, guys on video making cheese ravioli, and an uncountable number of fifteen-minute “stars” who will be replaced any second now with the next batch. But true charisma is quite ephemeral, quite as slippery as any definition can be, as the Stoics were quick to point out. It does not depend on popularity, number of followers on Twitter, splashy photos on Facebook—it is the “X-Factor” of human attributes—it is in the eye of the beholder, and if that eye is already clouded with the detritus of a throw-away culture, of a culture which knows little of value and values little, then charisma begins to become even more ghostly.

The word derives from the Greek, meaning “grace” or “charm.” It was originally thought to be a divinely conferred attribute—a spiritual gift, which right away eliminates golf ladies in tight sweaters and rappers with enough gold around their necks to subvert a small country’s economy. German sociologist Max Weber introduced the term “personality charisma”:

Charisma is a certain quality of an individual personality by virtue of which he is set apart from ordinary men and treated as endowed with supernatural, superhuman, or at least specifically exceptional powers or qualities. These as such are not accessible to the ordinary person, but are regarded as of divine origin or as exemplary, and on the basis of them the individual concerned is treated as a leader.

Paul Joose, yet another sociologist, nailed the salient feature of Weber’s definition:

…Through simple yet profoundly consequential phrases such as “are considered” and “is treated,” charisma becomes a relational, attributable, and at last a properly sociological concept…For Weber, the locus of power is in the led, who actively (if perhaps unconsciously)  invest their leaders with social authority.

So, if beauty is in the eye of the beholder, then so is charisma. And no doubt the perspicacious reader has already noted that Weber’s definition covers the Good, the Bad, and the Ugly; since charisma is so slippery, and since there are 7.6 billion of us beholders on the globe, there are bound to be some really, really, awful people identified as charismatic by SOMEONE—and we all know there have been. Even a cursory look at a small piece of the world’s history—in the U.S.—shows us Father Coughlin and Huey Long, Amy Semple McPherson and dozens of political demagogues—all considered charismatic by lots of people.  Not to mention the Hitlers and Pol Pots of the world. There is the Iceni warrior princess (no, not Xena) Boudica, and the Iron Lady Margaret Thatcher (Good and Bad), but there is one person who nailed charisma: the last of the Ptolemaic line, Cleopatra VII, the Queen of Egypt.

Daughter Ptolemy XII Auletes, she became co-regent with her brother, Ptolemy XIII, but not for long. This will not be a long Wikipedia-like  account of the infighting, revolts, poisonings, military struggles, political intrigues and general chaos, but one of an amazing young woman who ruled Egypt with charm and grace: Charisma. Cleopatra was not, by the standards of today’s pneumatic ladies, a babe. She was small, let’s say petite. The picture at the top is from a Berlin museum. She wouldn’t scare kids if she went out for a walk, but certainly wouldn’t draw many, if any, stares shopping at Walmart. What she was, what she brought to bear every time, was a ruthless ambition, a shrewd political sensibility, a sexuality which apparently was in service to her deepest wish to keep Egypt safe, inviolate, from the grasping, bloody, voracious Roman maw—a much stronger, much more experienced empire.

Remember, she was still young, even by the life-span average of the time, but she was, among other things, smart—cunning, even. She worked hard to do what Weber had suggested a charismatic personality would do: cement the bond between leader and led without dissolving the distinction of authority and status between them. Egyptians loved her, admired her, respected her, even though she was not of their ethnicity. She was fluent in several languages and could read Egyptian. She fought the good fight, seduced two powerful Romans, had four children and almost, almost, succeeded. Cleopatra’s charisma is undeniable, but one wonders if such an attribute can be learned.

“8 Signs and Characteristics of a Charismatic Person,” “4 Common Traits of the Most Charismatic People,” “Charisma and Being Charismatic: Skills You Need.” These are just a few of the myriad pages one finds on Google, pages one reads to learn how to be charismatic. What are these skills and did Cleopatra have some, all, any of them? Most of these lists center on some common themes: Listening skills, compassion, confidence, positive body language – well, the idea is that one can master certain skills and presto! Charisma! But isn’t this backwards?  Naturally charismatic people have at least SOME of these traits already. They are products of the elusive charisma attribute which is “divinely conferred.” One doesn’t get some skills first and THEN get acknowledged as charismatic. Cleopatra had those skills and more and she didn’t have to resort to a search engine to learn them.

Imagine, if you will, that you are a time traveler and are standing in Cleopatra’s court amidst torch lights, music, games and exotic animals on leashes. As you move to get a better look at the Queen of Egypt, you see her small, delicate form sitting erect on a gilded couch. She is pretty nondescript, but as she speaks, you feel the wave of sensuality and magnetism which only the truly charismatic can radiate. When she speaks, you feel enveloped by her words; you are the only one in this vast hall with her, and you now know what Caesar and Antony felt.

You can’t learn any of that from a website.

More from Len Holman: UFOs & UAPS – The Sky Talks And It Is Us Talking, Ladies in Hats, Naked Chess: A Meeting of Hearts and Minds, Through the Western Gate: Le Guin, Francoise Sagan, and the Tao Te Ching