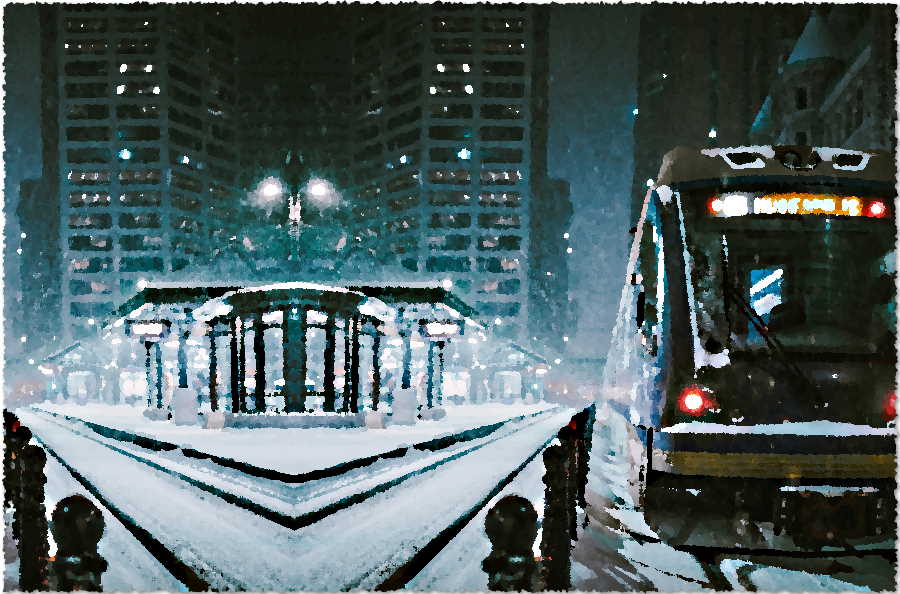 Firstly, within Cityboy there is the notion of the city as every bit a character as that of John Argent Jr. The city never changes—it is the one lone, solid, dependable thing. It never changes, but John’s perception of it does. When he is young, the city lives as its own entity—a breathing, living being that holds endless possibility. But as John ages, the city grows more menacing. It strangles him, much like a vine within the wilderness. It overwhelms, and it sucks the life from him. Yet John is both attracted and repelled by its expectations. The city—it is this lone love, this mysterious, cosmopolitan, wonderful thing.

City noises – honking horns, ringing  phones, the train passing down the tracks – all seemed in place. City sights – the white walls of the hospital, the budding trees outside, and the blue, blue sky – were the same as yesterday.

Throughout the novel, John grows dependent on the city, so much so that without it, he feels he lacks identity. He moves through life taking in observations and engaging in conversation that much of the time he feels leads nowhere. Has the city let him down? Or has he let down the city? John Argent Jr. needs it—it brings him structure, as the buildings hold themselves in. Streets are numbered and places exist for a purpose. Likewise, the people therein are equally as important, as John admits he desperately seeks validation. As example, his idol is Bob Dylan—someone who, in the 1960s, was seen as a rebel. John feels he is a rebel within, but shamefully he craves a kind of conformity. He doesn’t like to disappoint others, and nor does he wish for confrontation, as that will only bring on bad feelings.

Throughout the narrative, Ario maintains a simple yet not simplistic approach. Moments that hold no import he breezes over quickly:

The time was 1955 and it was spring. Senator Hubert Humphrey topped the news with his criticism of President Dwight Eisenhower’s Southeast Asian policy, but the weather was great. It was 60 degrees. The next six years held no special memories.

More than anything, Cityboy is a story about identity. While John does become mentally ill, this can be attributed to not only a chemical imbalance, or the result of his brain injury following his head smash onto the windshield one night, or his simple loss of self. Who is John if he is not someone’s son, someone’s friend, a lawyer, a city member? Without his city, who would he be? At one point, John finally admits that the city is a place for grown ups, and that he’d have to let go of his previous identity—much of which is revealed via metaphor:

The city was actually for adults – people that acted mature and were responsible – as I had known all along.  I had had to cut the umbilical cord.  I was like Dorothy in The Wizard of Oz, all I had to do was tap my feet to get home.  I was done chasing windmills as if I was some kind of Don Quixote.  I would never be THE CITY.  I was a grown man realizing my powerless position.  I put the city in one hand and my life in another. By giving up my identity as a cityboy, I had not only made peace, I was able to look back and smile.

What is the city, exactly? A place for interaction, a place to learn, to grow, to engage, to work, to blossom? The city becomes its own entity—a supplier of needs and a place for comparison, as well as an endless coming and going of longing and desire:

Minneapolis was kind of schizophrenic. That is, life happened like you were watching a movie. It seemed only partly real. Friends were coming and going, moments made impressions sometimes while not really clear why, and a person felt a little bit apart from it all. I felt like the ball was rolling as I tried to figure which direction it would go.

Who are any of us other than what exists within the eyes of others. ‘I was a conglomeration of perception,’ John says. Conversations are never as deep as he wishes and he begins to notice the hollowness of those around them. How can they be satisfied with so little, while John’s heart remains so heavy? Within, there is the recurring theme of John’s need for approval and validation from others, or in this case, the city:

The city was willing to bestow acceptance upon me as I grew. I could tell the difference between acceptance and rejection. This is because my life was moving, and I could recognize subtleties. Rejection felt like heat in the summer; acceptance was like a drink of water from a spring well. Acceptance did me well.

For John, there is no separation from the city—people are the city. They move within its confines and its buildings and its numbered avenues and streets. It is as though the city itself is its own living entity, with its own heartbeat. And although John’s mental illness narratively lurks below, much of his unhappiness stems from his need to connect with people within the city—a connection he keeps missing. Believing he is transparent (in one moment, he states that he feels that everyone can see through to his heart), in age, he comes to learn that this wonderful city is perhaps not what he thought. Yet, leaving it would prove impossible, since so much of it is tied to his identity. As example, those with whom he works are shallow and more into social climbing and vapid conversation than really connecting:

I was very lonely at this time despite being surrounded by people. Conversation in the office was surface level, and I was so deep into my being and trying to work out my life. I had fun at the office, but I sensed a much stronger need to communicate on deeper levels. My being was really thousands of miles beneath everyday citylife.

More than anything, John seeks a connection—and perhaps this is partly his reason for idolizing a ‘rebel’ like Bob Dylan. He needs a hero, someone to guide him, and someone to reassure him that he is ok. As example, in one scene, John’s coworker encourages him to go into the boss’s office and ask for a promotion and a raise. Yet within the novel, we never come to learn if John ever got the raise or promotion, but rather, that John chose to remember it this way indicates that it was more important for someone to recognize that he deserved it. To him, this validation mattered more than any actual raise or promotion.

Throughout Cityboy, Ario does employ the use of clichés, but most often he undermines them with a simple, philosophic twist:

Time is all a jumbled process for me now. Thinking back from 1990 to 1965 some things that happened yesterday seem longer ago than Jim moving. Perhaps it is the depth of the loss. Those things which hurt exist with clarity forever. Shakespeare said time heals all wounds. It is more true that time deals with all wounds. Sometimes the hurt can grow.

How else to describe it? While many novels delve into feeling, Cityboy is something transparent. Within, John is every bit as complex as the forward and fast-moving city, the bustle of bus horns and the explosions of feet upon pavements, and the muffle of voices. All around, interactions are taking place, and exchanges are made, which mirror what John is feeling. Perhaps his criticism is that he seeks too much from others and not enough from within. (Psychologists call this ‘other-esteem’ versus ‘self-esteem.’) In fact, not until he gets the approbation from his dying grandpa does he finally feel at peace:

The last line can be read multiple ways—John is ‘right’ as in alright, but also right along with. Still connected, he and the city are still one—yet now, at peace. This is why John eternally is the Cityboy, albeit he comes to realize that his city is not the only city and that there are many other cities with similar losses and loves:

Furthermore, I was just beginning to see that there was more than one city.  Yes, that’s right – everyone had their own city that existed for them. My city was just one of many.

And perhaps otherness is the means for growth, where one learns that there are others who have felt every bit as lost and unknown as John. I’ll end here with a Bob Dylan lyric:

*The novel is titled Cityboy and not City Boy, despite any future protestations from Bruce’s derpy publisher. One word—Cityboy—is imperative for the narrative. I mean, duh.

If you enjoyed this review of Bruce Ario’s “Cityboy”, consider supporting us and get patron-only content on our Patreon page. This will help the growth of this site, the automachination YouTube channel, and the ArtiFact Podcast. Recent episodes include a discussion of Ryusuke Hamaguchi’s “Asako I & II” and “Drive My Car”, a dissection of Elon Musk’s stupidest claims, and a critique of James Cameron’s Terminator films.