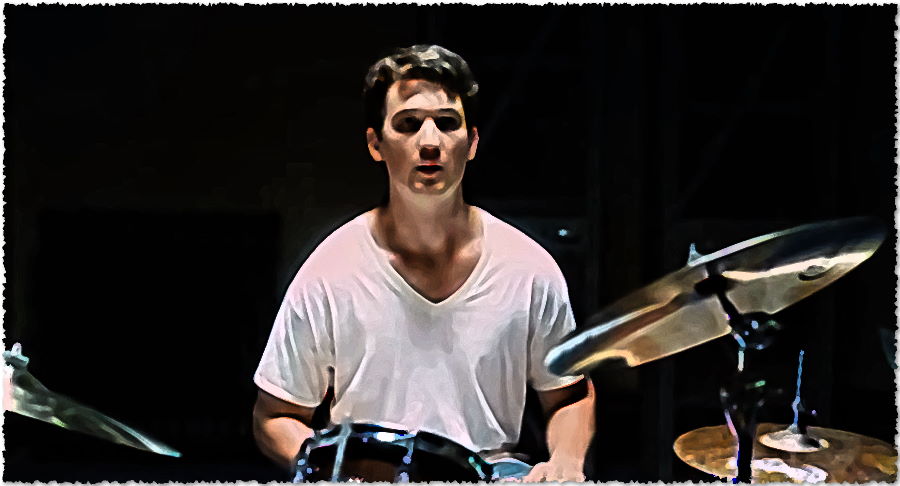 Few films address the drive required for artistic greatness. Rather, we are presented with notions that are nebulous—wherein so-called ‘achievements’ are validated via one’s desire to be famous. But greatness is not measured in fame. In the world of Damien Chazelle’s Whiplash, artistic craft exists as an objective thing, and certain musicians are notably better than others. Those who excel move on to First Chair. And those who can’t change their major to pre-med. (‘I guess he got discouraged,’ Fletcher says.) I must preface this by stating that I am not a musician, and so I am unable to comment on the accuracy and perfection of the playing therein. But I can comment on the writing, which is extremely accurate with regard to the intensity involved when one wishes to triumph. As example, when an artist strives for greatness, compromises must be made. Often, artistic achievement comes at the expense of friends, family, career and a social life.

Miles Teller plays Andrew Neiman, a first-year student enrolled at Shaffer Music Conservatory. With saxophonist Charlie Parker (1920-1955) as his hero, Andrew does not merely play the drums—he lives them. More than anything, he longs to be ‘One of the Greats.’ He desires this so much so that in an arrogant moment, he breaks up with his girlfriend Nicole (whom he only seems to call when feeling good) on the basis that his drums are more important and that she would only get in the way. It is a cold move on his part but understandable, given his perspective. Paul Reiser plays Andrew’s platitude-driven yet loving father who clearly does not understand him. Early in the film, the two are seated in a theatre as his father (Jim) pours Raisinets into a large tub of popcorn. ‘I don’t like the Raisinets,’ Andrew whispers, as he picks for the popcorn. ‘I just eat around them.’ Bemused, Jim looks at his son and responds, ‘I just don’t understand you.’

This is an apparently simple moment yet Damien Chazelle allows it to establish much of their relationship. Jim is a high school teacher who longed to be a writer. But unlike his son, he never had the drive. As example, in a poignant moment while the family is seated at dinner, Andrew is asked about his drumming but he is quickly upstaged by his more conventional, football-playing (I presume?) cousins. It is a powerful scene that I recommend every creative person watch. ‘I think being the greatest jazz musician of the twentieth century is anyone’s idea of success,’ Andrew says, with regard to Charlie Parker. ‘Dying drunk, broke and full of heroin is not my idea of success,’ Jim rebuffs. Yes, while is true that Andrew is somewhat idealizing the Cult of Personality behind Charlie Parker, his motivations are in the right place. Parker had a goal, and he stopped at nothing—not even his own physical health—to achieve it. Likewise, Andrew is not too far behind vis-à-vis his bloody, taped up hands and haggard, malnourished frame.

And what of Terrence Fletcher (J.K. Simmons)? He is clearly a star performer and the film presents him as an abuser with good intent. From his insults, yelling, threats, verbal and physical assaults, in real life he would never have lasted long. Yet he merely wishes his students become the best they can be and the better they are the more he abuses them, apparently. When word arrives that one of his previous students died via car accident, Fletcher breaks down and discloses that his student was a beautiful player. (It is later learned that the student died by hanging, at least partly due to Fletcher’s abuse.) An abuser with good intent? I don’t buy this. It is difficult to remain respectful when someone throws a chair at his student’s head. Andrew is this student. As the legend goes, Charlie Parker did not grow into Charlie Parker until Jo Jones threw a cymbal at his head. (It says the cymbal was thrown at his feet according to Wikipedia but one can see the similarity.) So what happened? Parker went home and cried himself to sleep but then practiced until he got great. While it is true that false encouragement only stunts one’s artistic growth, without sounding too preachy—abuse is never the answer. But for the film and Damien Chazelle’s scripting chops, it works.

In contrast, the writing world is notoriously anti-Fletcher, which only serves as a detriment. No, I am not suggesting that more behave like Fletcher—on the contrary. But perhaps it would benefit to not be so polite. Also, understanding artistic craft would help. Fletcher at least seems to. He knows when his students are out of tempo and he expects the best from them. So, what is the main difference here? I’ll say it again—in the world of Whiplash, artistic craft exists as an objective thing. When Andrew is at the dinner table and one of his football cousins asks, ‘How do you determine a music competition? Isn’t it subjective?’ Andrew curtly replies, ‘No.’

Whiplash is a very clever film. On one hand, it manages to render the story of Charlie Parker via fictional characters. Easily the screenplay could have fallen into cliché. Parker died at 34 due to a heroin overdose, which is the stereotype of the Tragic Artist. That the film did not take this route speaks well of Damien Chazelle’s writing. There are moments where the narrative moves as if this were a thriller, and given this is a film about drumming makes it all the more remarkable. Yes, Fletcher most resembles a drill instructor—notably Full Metal Jacket will come to mind. But his intensity works within this ensconced world. Ultimately, Fletcher is removed from his position due to his abuse towards his students. Indeed, there are ways to teach and encourage and push without resorting to insult and humiliation. Most could never last a single day in Fletcher’s class, myself included. I mean, who can perform when berated with insult, threat and humiliation? Perhaps that works for some, but not me. But then again, I am not Charlie Parker.

Whiplash is an important film for any creative, craft-driven person. Those who strive for greatness will get it. This is the sort of film that will yield many different responses. From Andrew’s relationship with his father, to his relationship with his girlfriend, to that of Fletcher—all compose the backdrop of his life. Andrew is alone but he does not seem to be lonely because his art occupies him. It bloodies his hands and through his sweat and toil, he delivers. Drumming is an intense, physical activity. I once knew a drummer who spoke of the shin splints that resulted from hours of practicing. It is a craft that utilizes the entire body. As a writer, I am lucky that at least writing does not damage my body. But what of the artist whose art causes his hands to bleed and his shins to splint? When one is forced, due to physical pain, to cease for a time—how frustrating that must be. What then?

The only other film (that I know of) which demonstrates artistic craft as objective is Amadeus (1984). In it, Salieri is seething with envy at the foot of Mozart’s superior talent. Salieri gains more notoriety than Mozart but it kills him to know that privately Mozart is the better composer. In today’s writing world, where most everyone sucks, this is unheard of. Money, fame and image are what matter. Bloviate and the public will believe it—for a moment. But moments pass, thankfully. Charlie Parker died penniless. Yet here I am mentioning him. He was the Yardbird—The Band Leader. The Composer. Artist and intellectual, he was more than mere Entertainer. ‘No one here was friends with Charlie Parker—that’s the point,’ Andrew says over dinner. Yet ultimately, we remember. Therein lies the power.

If you enjoyed this review of Damien Chazelle’s Whiplash, consider supporting us and get patron-only content on our Patreon page. This will help the growth of this site, the automachination YouTube channel, and the ArtiFact Podcast. Recent episodes include an examination of Abstract Expressionism as depicted in Kurt Vonnegut’s Bluebeard, a debunking of Internet sciolists such as Jordan B. Peterson and Christopher Langan, and a breakdown of Elizabeth Barrett Browning’s Aurora Leigh.

More from Jessica Schneider: So Much Is Delicate: C. Scott Willis’s “The Woodmans” (2010), The Romantic Longing within Jean Renoir’s “The River” (1951), Vivian Maier, Herman Melville, & The Artist Underneath